Himachal farmers have an affair with flowers 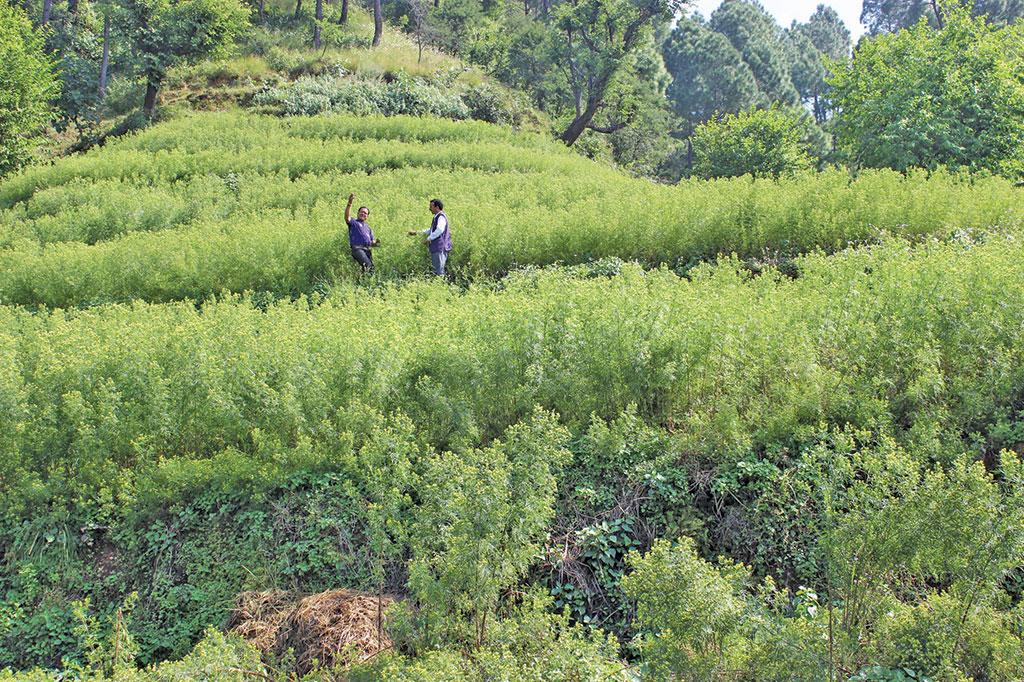 Since 2017, close to 700 hectares have been brought under the cultivation of aromatic plants such as wild marigolds in Himachal Pradesh (Photograph: Ashwani Sharma)

“The people in my village thought I had gone mad when I decided to give up maize and grow wild marigolds in 2017,” says Pawan Kumar, a farmer in Himachal Pradesh. “The rebukes grew stronger when the flowers failed to bloom the first season,” recalls the 45-year-old resident of the backward Talla village in Chamba district that does not even have a motorable road.

Today, Pawan has become a role model for most farmers in the district. He earns a phenomenal Rs 1.2 lakh a hectare — which is roughly five times what he would earn from maize cultivation.

Similarly, Ganesh Prashar from Band Kadian village in Kangra district is reaping the benefits of lemon grass which he started growing just four years ago. “I started farming in one bigha (6 bigha is a hectare) and today I am cultivating 46 bighas. I have also formed a society of 25 farmers, 16 of whom have already shifted to lemon grass cultivation,” he says.

Like Pawan and Prashar, farmers across the hill state are finding refuge in aromatic plant cultivation as income from traditional crops has become erratic primarily due to extreme weather events like hail and frost, and rampant animal attacks.

The aromatic plants are hardy, less prone to animal attacks and, most importantly, have a huge demand in the perfume, flavouring, and condiment industries.

The domestic industry imports marigold from Australia, France, Brazil and Kenya. The global essential oil market demand is projected to expand at a compounded annual growth rate of 8.6 per cent from 2019 to 2025.

“In just three year, beginning 2017, close to 700 hectares (ha) have been brought under cultivation of aromatic plants. What is even better is that the bulk of this land is wasteland or unproductive farmland,” says Rakesh Kumar, principal scientist at the Council of Scientific & Industrial Research or CSIR’s Institute of Himalayan Bioresource Technology (IHBT) at Palampur.

He adds that the state produced 7.6 tonnes of essential oil from wild marigold alone in the past two years. “This benefited 861 farmers who cumulatively earned Rs 5.56 crore.”

Besides training farmers in cultivation of aromatic plants, IHBT has set up 16 essential oil distillation units in the state that are operated by farmers’ cooperatives. CSIR has started the Aroma Mission, under which it plans to expand cultivation of essential oil yielding crops to 5,500 hectares by 2022.

“We have tied up a buy back arrangement with private companies,” Rakesh says. The distillation units are steam-based and run on firewood, which is available in abundance in the villages. The agency also provides the seeds for free.

The main wild marigold-growing regions in the state are Bhatiyat and Salooni villages in Chamba district, Seraj and Gogardhar in Mandi district, Banjar in Kullu district and Rampur in Shimla district, says Sanjay Kumar, director CSIR-IHBT. At the same time, lemon grass has picked up in Una, Bilaspur and Kangra districts, which are in the lower hill regions and have a warm climate.

“We introduced wild marigold cultivations in Uttarakhand and Jammu & Kashmir, but the success rate in Himachal Pradesh is notable,” says Kumar, highlighting the viability of aromatic plants in the state. He adds that the plants can be harvested within three to four months and can be cultivated mono-crop or inter-crop in orchards.

Shiv Kumar Vashisht, a Gujarat-based essential oils trader who buys Prashar’s lemon grass, believes the prices will further increase if the government recognises the farms as organic. Under the current norms, a farm can be called organic after three successive years of standardised testing and certification.

“Most farmers in the state do not use any chemicals to grow aromatic plants. I have got Parshar’s yields checked by a German agency which certified it as organic,” he says.

Kulbhshan Upmanyu of Himalayan Niti Abhiyan, a people’s collective, says the assured high returns that these crops promise can stop the current migration from the state and bring the young back to farming. “This will be a great positive for the state.”