India is the second-largest producer of sugar in the world, after Brazil

If there is one crop that affects India’s economy, water supply and promotes nepotism, it is sugarcane. India was the first country in the world where sugarcane farming — and the first refined sugar — was born more than 2,000 years ago. In fact, the word “sugar” has its origins in Sanskrit, Shaakara.

India is the second-largest producer of sugar in the world, after Brazil. While most of Brazil’s sugar is exported — where a large ethanol fuel lobby promotes growth — it is a cruel paradoxical situation in India. Farmers, who were encouraged by their political masters to farm sugarcane, are facing an existential crisis.

Sugar mill owners owe them almost Rs 24,000 crore. So farmers are throwing away sugarcane or burning it on the streets to express protest. The sugar industry engages around 50 million farmers and two million mill workers. Ironically, India imports sugar even though the country is producing surplus sugar (see graph ‘Unexplained logic’). 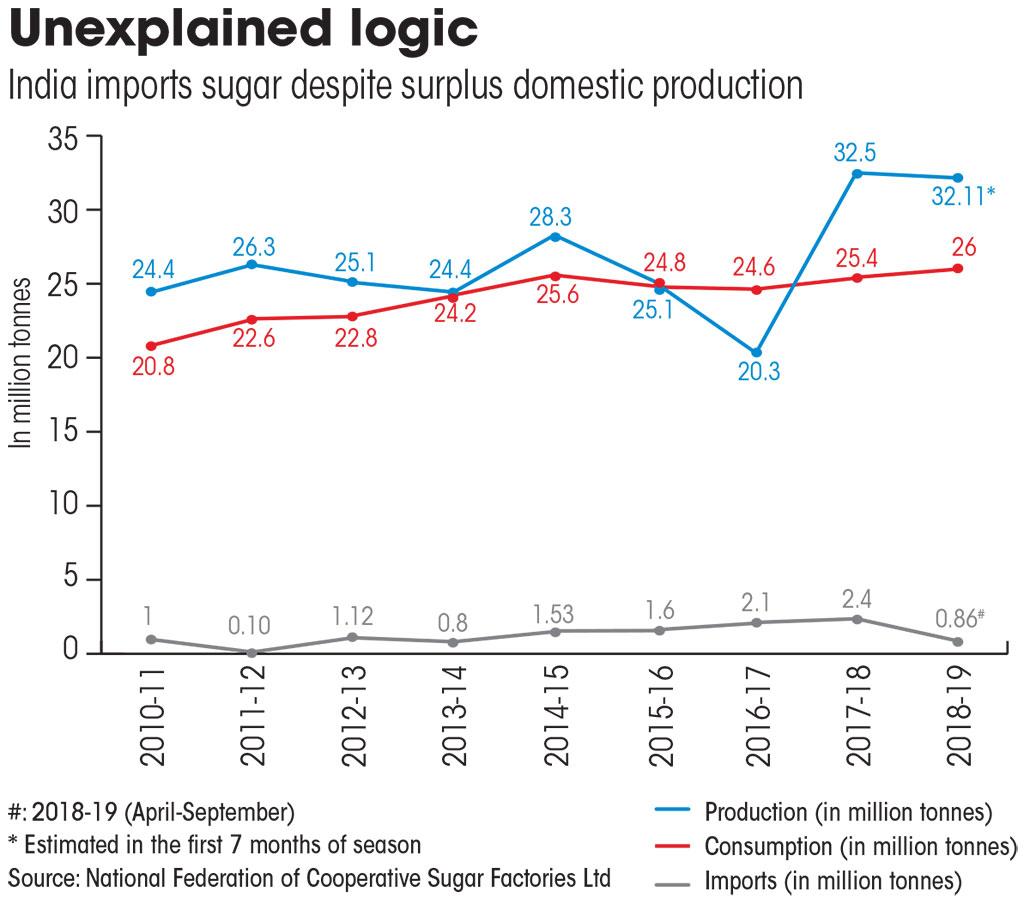 Governments will once again be forced to intervene, given the intense political activity in key sugar producing states. Maharashtra, Uttar Pradesh and Karnataka — which together produce about 81 per cent of India’s sugar — will send more than 158 members to the Lok Sabha. Governments will act, not only because of the electoral importance of these states, but because politicians in these states share a covert relationship with the sugar lobby. Of the 183 mills, for which data are available, 101 had chairpersons who competed for state or national elections between 1993 and 2005 (see ‘Seeking captive vote banks’). 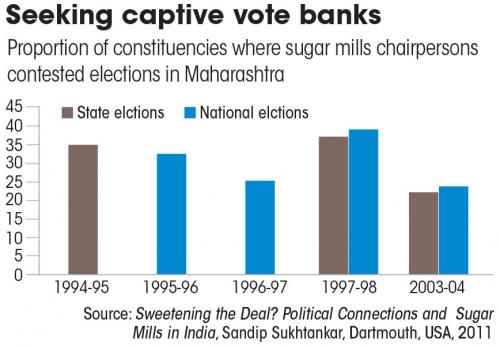 THE NEXUS BETWEEN the sugar industry and the government has resulted in innumerable notifications or acts (see ‘Interventions galore’). The government monitors the produce, fixes the prices of sugarcane and refined sugar. The link between the announcement of sops and the run-up to elections is unmistakable. Just before the Lok Sabha elections 2019, a number of decisions were taken.

In January this year, the National Democratic Alliance (NDA) government increased the minimum selling price of sugar from Rs 29 to Rs 31, which the sugar lobby welcomed. In February, the NDA government sanctioned soft loans of Rs 10,540 crore to help sugar mills to clear the mounting arrears of sugarcane farmers.

Earlier, in June 2018, in wake of unprecedented sugar production, the government announced a package of Rs 8,500 crore for the sugar mill industry, which included Rs 4,440 crore in soft loans to mills to create ethanol production capacity. It also provided a cash assistance of Rs 138.8 per tonne to mills, which cost Rs 4,100 crore to the exchequer.

Besides, the government allowed sugar mills to maintain 3 million tonnes of buffer stock for 2017-18, for which the government allocated Rs 1,175 crore. The previous United Progressive Alliance (UPA) government too gave Rs 7,200 crore interest-free bank loans to mill owners to pay dues to cane farmers in 2013, just before the Lok Sabha elections of 2014.

The president of Indian Sugar Mills Association, Rohit Pawar, is the grand-nephew of Sharad Pawar, the leader of the Nationalist Congress Party (NCP). Sharad Pawar — who is considered as the father of sugar barons — took a controversial decision in 2004-05 when he was agriculture minister. He allowed the export and import of sugar (from Brazil) at the same time — selling at a cheaper rate and buying at a costly rate. This resulted in a huge loss to the public exchequer. “News reports say Sharad Pawar owns sugar mills in Brazil too,” says an agriculture policy expert, who has been tracking the sugar industry.

CAUGHT IN THIS maze are hapless sugarcane farmers. Despite loans given to the sugar industry by the government, farmers have not been paid. They face a very precarious situation. Timing the harvest is crucial, as sugarcane begins to rot after only a day. So they are forced to sell at throwaway prices or simply throw it away.

Significantly, most of the people working in sugarcane farms are migrant workers, as farmers often depend on hiring migrants with lower wages, and who make fewer demands on working conditions. Delays in procurement, or the government’s decisions on procurement price is accentuating farmer’s distress.