New restriction on cattle slaughter will severely cripple the livestock economy which is bigger than crop economy; poor farmers shifted to livestock in face of uncertain rain and dwindling income 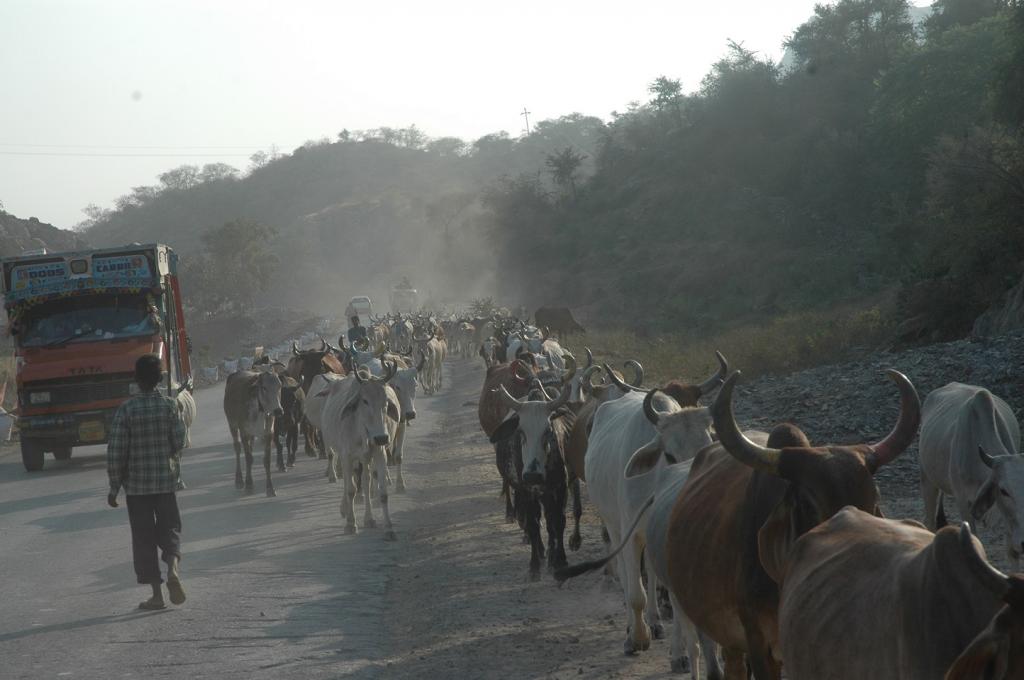 Forget about the loss of revenue from exporting buffalo meat after government’s ban on procuring animals from market place for slaughter, the real impact will be on India’s poorest farmers, and the economy of livestock which is worth more than Rs 3 lakh crore.

The debate over the ban criminally revolves around federalism and religious sentiments. Rather, it is all set to kill an economy that India’s small and marginal farmers switched over to as adaptation to uncertain monsoon and dwindling income from regular crops

In just a decade, there is a historic shift in the agriculture sector. Economic contribution of livestock is today more than that of food grain crops. Traditionally, of the three components of the sector—crops, livestock and fisheries—crops drove the growth, and food grains are a major part of it. As a result, policy and programmes focused on crops.

This lack of knowledge of changing agrarian economy in the country has also resulted in misplaced debates after these recent regulations. While media focuses on the loss of export revenue, there is hardly any talk over the local economy of livestock which decides agricultural growth unilaterally now.

It has been more than a decade that livestock economy is booming as a result of farmers’ conscious decision to switch over from crops. When in 2002-03, monetary contribution of livestock surpassed that of food grains, policy makers ignored it as a temporary coping mechanism of the poor in the face of sluggish agriculture due to repeated droughts. But livestock contribution has since remained higher by 5-13 per cent, according to economists at the National Centre for Agricultural Economics and Policy Research. In fact, both livestock and fisheries components have been growing faster than the crops component for a decade. A report prepared for the 12th Five Year Plan (ended in 2017) accepted this shift by recognising livestock as the engine of agriculture growth.

After livestock, paddy is the next highest contributor to the agriculture GDP. In 2009-10, output from livestock was 2.5 times the value of paddy and more than thrice the value of wheat, as per the Central Statistical Office data. “Animals are natural capital, which can be easily reproduced to act as a living bank with offspring as interest, and an insurance against income shocks of crop failure and natural calamities,” says an economist.

Driving livestock growth are changes in the utility of livestock for farmers and in food consumption pattern. Importance of livestock as the “draught power” has declined due to mechanisation of agricultural operations and declining farm sizes. Use of dung is also being replaced by chemical fertilisers. At the same time, consumption of livestock products like eggs, milk and meat is increasing due to rise in the income of the booming middle class, both in urban and rural areas.

For many agriculture economists, due to this constant confusion over ‘beef’ policy and the increasing intolerance to meat eating, the poor’s new economy risks a meltdown. For example, the new regulation debars people from trading in market places. Most of the cattle are sold in local weekly markets. These markets are accessible and are a convenient option for farmers who otherwise have to spend a lot on transportation.

Recognising the boom in livestock economy, way back in 2010-11, economists predicted that overall agriculture growth will be high. In 2009, despite severe drought, the agriculture sector registered growth due to the booming livestock economy. Livestock has assumed the most important role in providing employment and income generating opportunities. While crops still employ the maximum people, employment in livestock is fast catching up.

Rise of the livestock sector has implications for poverty. Rural poverty is less in states where livestock contributes more to farm income. Punjab, Haryana, Jammu & Kashmir, Himachal Pradesh, Kerala, Gujarat and Rajasthan are a case in point. Mostly, marginal farmers and those who have quit farming are joining the livestock business. About 70 per cent of the livestock market in India is owned by 67 per cent of the small and marginal farmers and by the landless. One way, prosperity is now more dependent on per capita livestock ownership than on farms. This implies that the growth of the livestock sector would have more effect on poverty reduction than the growth of the crops sector.

But this is not the full potential of the sector. Absence of policy focus has stifled the sector that caters to the poorest. India’s livestock productivity is 20-60 per cent lower than the global average. Deficiency of feed and fodder is the biggest factor responsible for 50 per cent of the total unrealised production potential, followed by inadequate breeding and reproduction, and increasing diseases among animals.

But now, with all these regulations and confusion over government’s own policy towards cattle, the new economy of the poor is under grave threat. As unemployment grips India, the livestock sector could have been a natural choice to tide over the crisis. But if one farmer is not sure of selling a cattle, and not sure about his or her security while dealing with cattle, the economy will just collapse. Like in the free market, sentiment also is critical for the economy of the poor.