Wheat and barley see the lowest increase in MSP announced by government; red lentils the highest 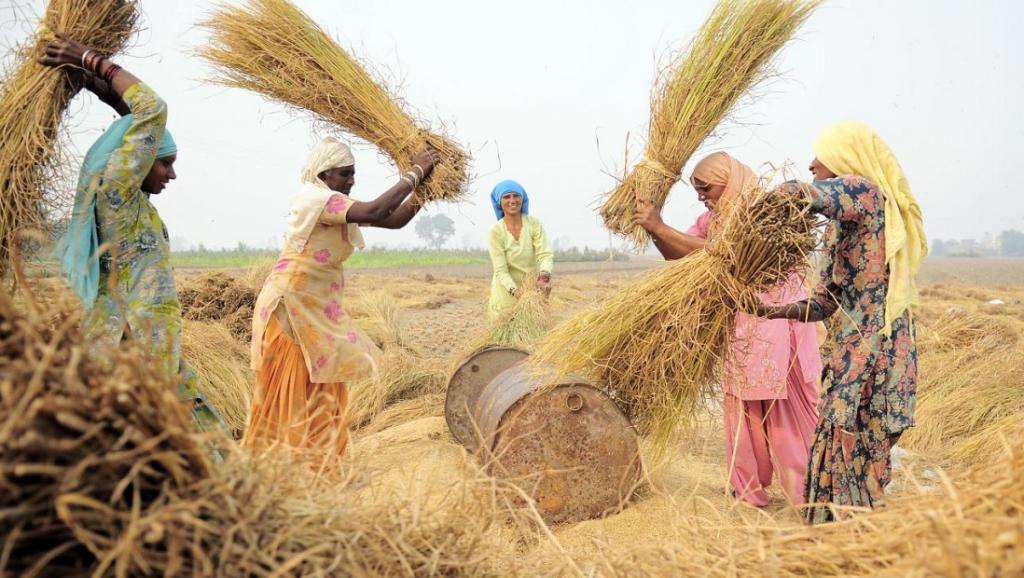 The farmers’ protests in Delhi and north India are in their tenth month, with the guarantee of Minimum Support Price (MSP) for crops as one of the main demands. Even as they rage on, the Union government September 8, 2021 approved to increase the MSP for rabi 2022-23.

The Cabinet Committee on Economic Affairs, chaired by Prime Minister Narendra Modi, approved the increase in the MSP for all rabi crops for the 2022-23 season.

However, agricultural experts said the increases in MSP of various crops showed the lop-sided judgement and misplaced priorities of the government. The increases would not help farmers in any way. Rather, their lot would worsen, they added.

For instance, two important crops, namely wheat and barley, have seen the lowest increases in MSP at Rs 40 and Rs 35, respectively.

On the other hand, a crop such as masoor dal (red lentils), which is not grown by a substantial proportion of Indian farmers, has seen an increase of Rs 400 in its MSP.

Red lentils are not used in a big way in Indian food, as compared to chickpeas and pigeon peas. In fact, India imports three million tonnes of pulses every year. Of this, one million tonnes are of red lentils.

The MSPs of canola (rapeseed) and mustard have also been increased by Rs 400, that of gram or chickpea by Rs 130 and that of safflower by Rs 114.

However, the government, in a statement, justified the increase in MSP of Rabi crops for RMS 2022-23. It said the increase was in line with the announcement made in the Union Budget 2018-19.

The budget had said the MSP should be increased by at least one-and-a-half times, keeping in view the average production across the country. 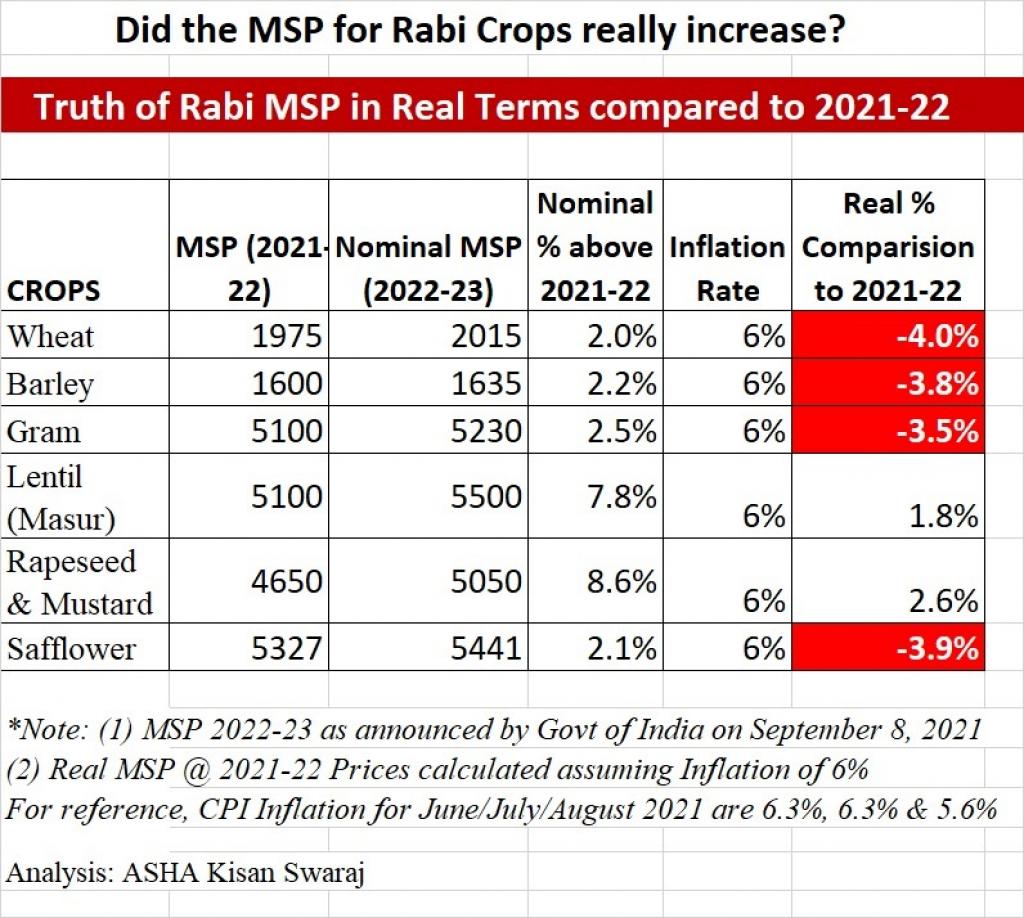 The above graphic has been made by ASHA Kisan Swaraj. Assuming an inflation rate of 6%, it calculates real per centage comparison of MSP to 2021-22

According to the statement, “the expected returns to farmers over their cost of production are estimated to be highest in case of wheat and rapeseed and mustard (100 per cent each), followed by lentil (79 per cent), gram (74 per cent), barley (60 per cent) and safflower (50 per cent).

Concerted efforts were made over the last few years to realign the MSPs in favour of oilseeds, pulses and coarse cereals to encourage farmers shift to larger area under these crops and adopt best technologies and farm practices, to correct demand — supply imbalance.

But, agriculture expert Devinder Sharma told Down To Earth that the legal guarantee of MSP that farmers in the Delhi protests had demanded, clearly meant they did not want trading below the fixed MSP.

He added that the current rate of inflation was 5.9 per cent. Petrol and diesel prices had doubled. In other words, input costs had increased significantly:

For example, the MSP on wheat and barley has increased by just two per cent. It does not cover the current inflation rate at all. At the same time, the current price of mustard is between Rs 7,000 and Rs 8,000 per quintal. The government, though, has been able to increase the MSP by just Rs 400 to Rs 5,050. How will a farmer who grows mustard, be able to even reach the market price? 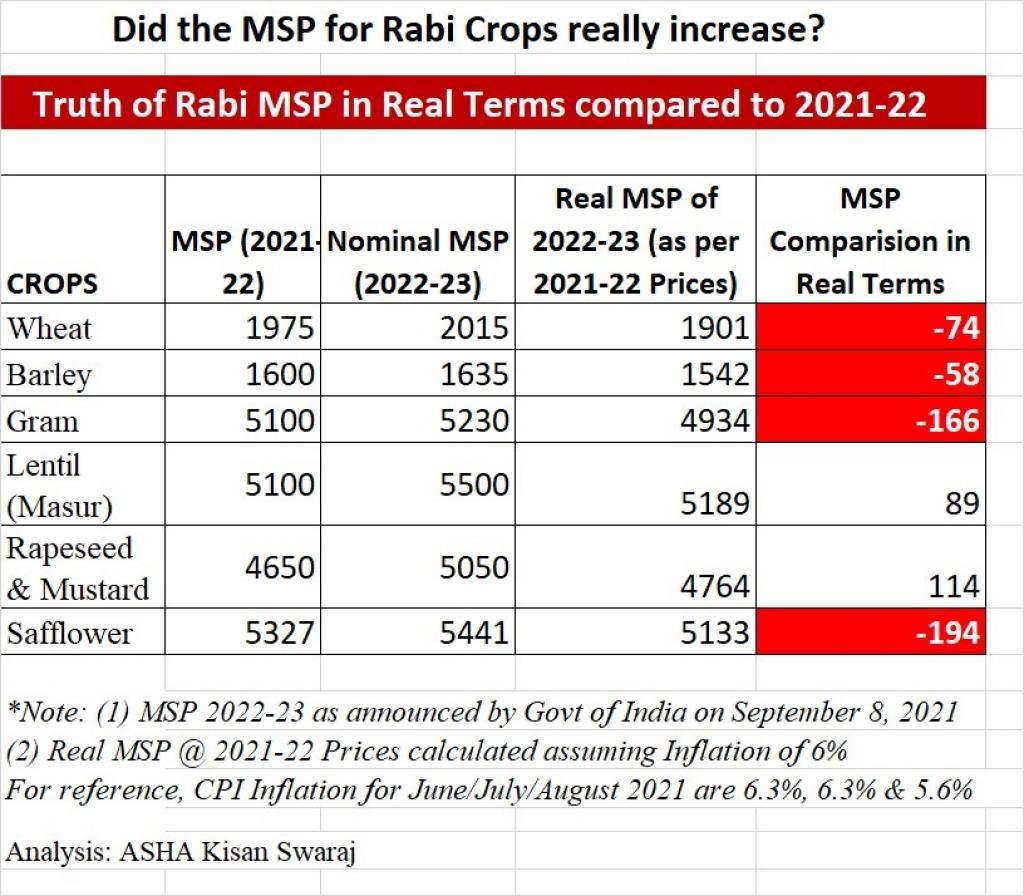 The above graphic has been made by ASHA Kisan Swaraj. Assuming an inflation rate of 6%, it calculates MSP comparison in real terms

Kiran Kumar Vissa, said his organisation, Asha Kisan Swaraj, that works for farmers, had compared the increased rates of the government’s MSP with the current six per cent inflation rate and the MSP rates of 2021-22. He added that the results were less than even the old MSP.

Sharma said such an (abysmal) increase in MSP was part of an old economic design to exclude farmers from agriculture.

“Recently, dearness allowance of government employees was increased. But there is no safety net in terms of MSP for farmers. MSP should be a benchmark. There should be no trading below it,” Sharma said.

Asha Kisan Swaraj said the government was misleading the farmers.