India is experiencing a warmer winter

After the monsoon, it’s the winter season which has played truant with India. More than half of the winter season has passed, but the characteristic chill felt in many parts is missing due to persistent above normal temperatures.

This warm weather might be good news for those who don’t like the winter, but such weather and temperature fluctuations adversely impact the growth of winter crops. Apples of Himachal Pradesh and strawberries of Maharashtra have been affected by the warm and dry weather.

But this winter season (October 2015 onwards), the number of such warm days appears to be high. More importantly, anomalies in the maximum temperatures have been higher than those in the minimum temperatures. This means the days have been quite warm. This weather data will give us an idea of how warm the winter has been.

Climate Prediction Centre (CPC) of National Centers for Environmental Prediction (NCEP) monitors city temperatures in many parts of the world, including India. Below data represents temperature anomalies between October 10, 2015 and January 10, 2016. For example, Srinagar 1.01°C means temperature in Srinagar during the period was 1.01°C above normal. It must be noted that this data is preliminary and official data from India Meteorological Department (IMD) may differ.

The range -0.5°C to +0.5°C of normal is considered as the normal range. But anything more than +0.5°C is considered as a positive anomaly (warmer than normal). Numerically, the above figures might appear small (such as 0.7°C), but they are significant in the case of temperature anomalies, especially in the case of Aurangabad which was quite warm. 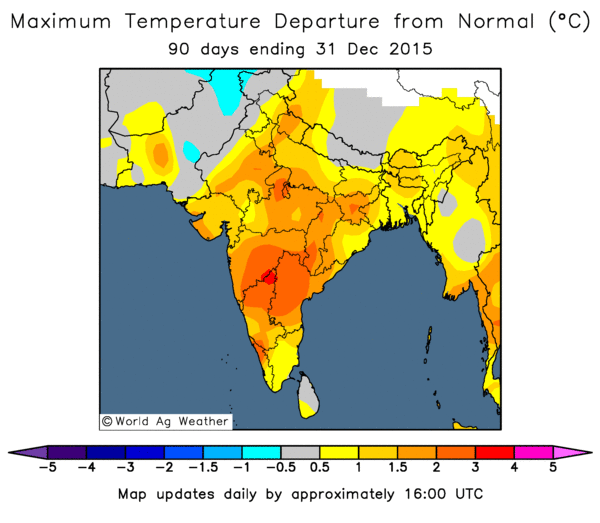 This image clearly shows that central India has been the warmest (highest anomaly) as compared to other parts of India. Parts of Maharashtra have seen significant above normal maximum temperatures (1.5-3°C above normal) with that in Marathwada being 2-3°C above normal. Eastern Madhya Pradesh is 1.5-2°C above normal, Gujarat 1-1.5°C, Rajasthan and Uttar Pradesh 0.5C-2°C, Delhi-NCR 1.5-2°C, Andhra Pradesh and Telangana 2-3°C. In northeastern states and Tamil Nadu, the temperature anomaly is 0.5-1°C. In most of Jammu and Kashmir, Punjab and some parts of Rajasthan, maximum temperatures have been in the normal zone. 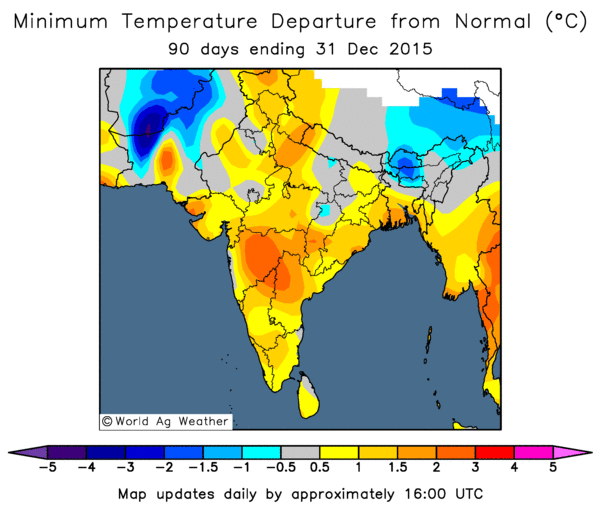 Talking about minimum temperature anomalies, once again the highest impact is seen in Maharashtra, especially Marathwada where minimum temperatures have been 2-3°C above normal in the crucial winter period. In southern India, anomalies have been lower, in the 0.5°C-1°C range. In parts of Delhi-NCR, they are in the 1°C-1.5°C range. Temperatures were below normal in eastern Sikkim, western Assam and adjoining West Bengal in this period.

Many parts of India had witnessed mini-summer like conditions in October. The Marathwada-Telangana- northeastern Karnataka belt had received very poor monsoon rainfall and now, temperatures in this belt have been above normal. This is likely to cause a significant impact on agriculture in these areas. 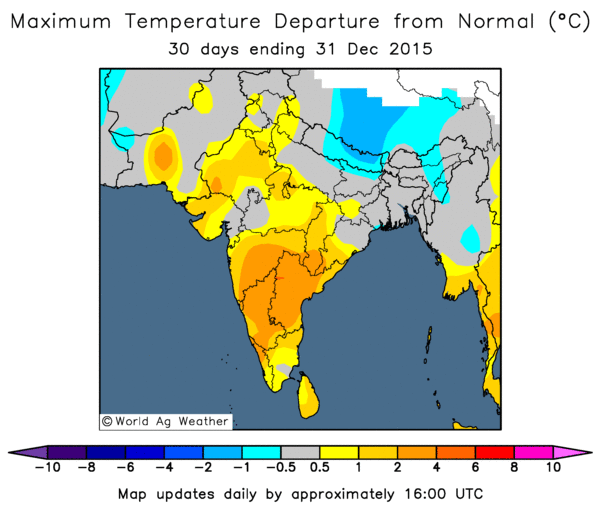 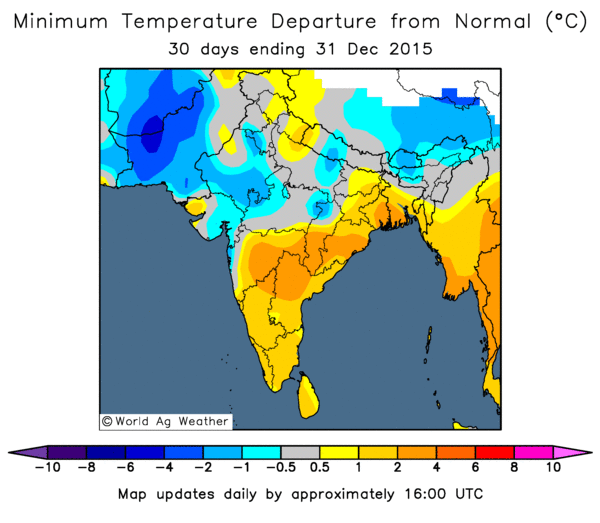 What is causing this pattern?

Strong El Niño conditions in the Pacific Ocean are being held responsible but the mechanism through which El Niño is impacting India’s winter isn’t clear yet. At first glance, the problem seems to be more local than global.

After the southwest monsoon withdraws, north-westerly winds (winds blowing from the northwest direction) set over India in the lower levels of the troposphere. We know that winds blow from a high pressure region to a low pressure region. During post-monsoon months, the air pressure is higher in northern parts (higher latitudes) than that in southern parts (lower latitudes). This is mainly because of reduction in surface heating in the high latitude areas.

As a result, India gets these north-westerly winds which are responsible for bringing northern cold air to various parts of India. 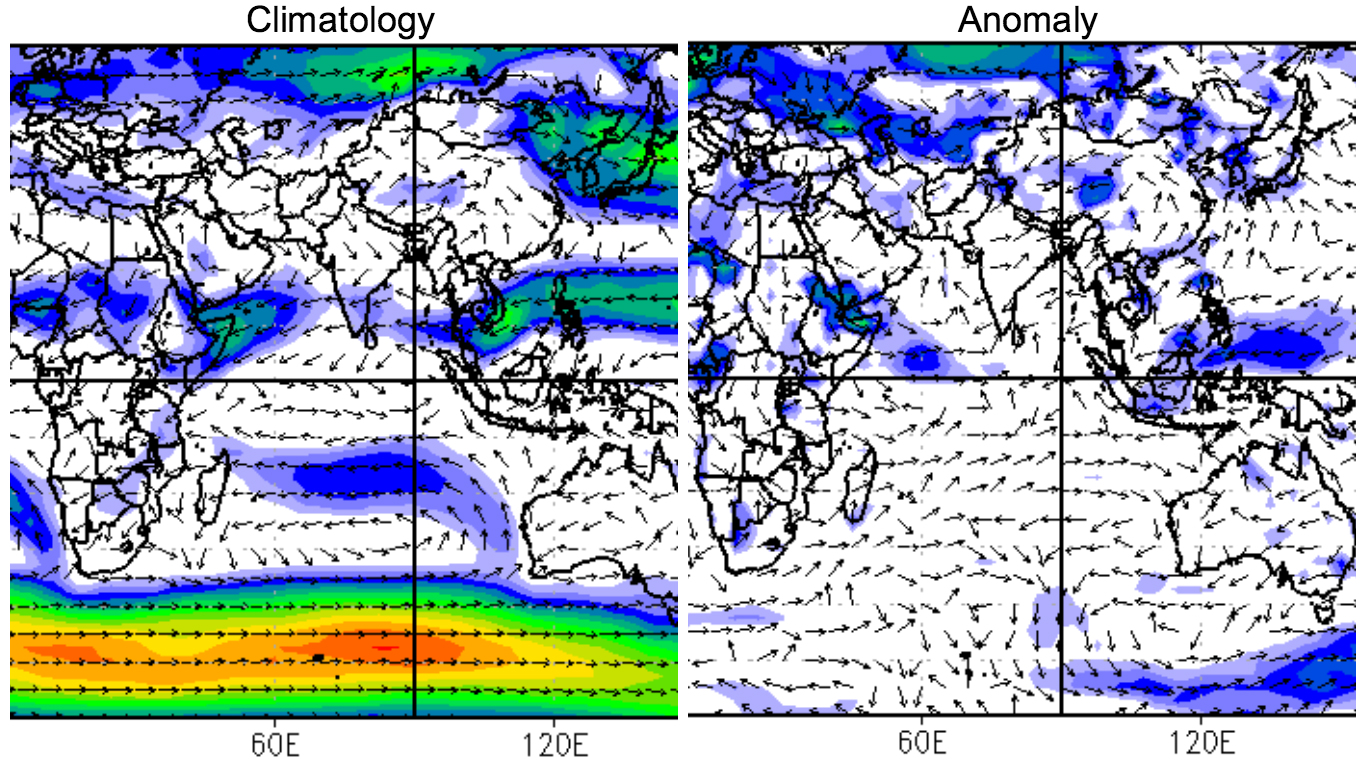 While the left side of the image above represents the climatology (the usual pattern) of winds at an altitude of 5,000 feet between November and January, the right side shows anomaly (variations) in these winds observed between November 2015 and January 10, 2016. Anomalous winds from the western and southwestern directions were present during this period (shown by arrows). This implies that these anomalous winds didn’t allow the penetration of cold air from higher latitudes which kept central and southern India warm (at least during the nights).

The biggest question now is why these western disturbances have been weak and less in number this time. Some research has been done in the past on the relationship between western disturbances and El Niño Southern Oscillation. The research says that western disturbances tend to intensify over northwest India under El Niño conditions. However, we are seeing the opposite occur and, hence, need to understand the reasons behind this trend.