It is not deficit monsoon, rather the lack of policies and mechanisms to drought-proof susceptible areas that turn the situation into a crisis 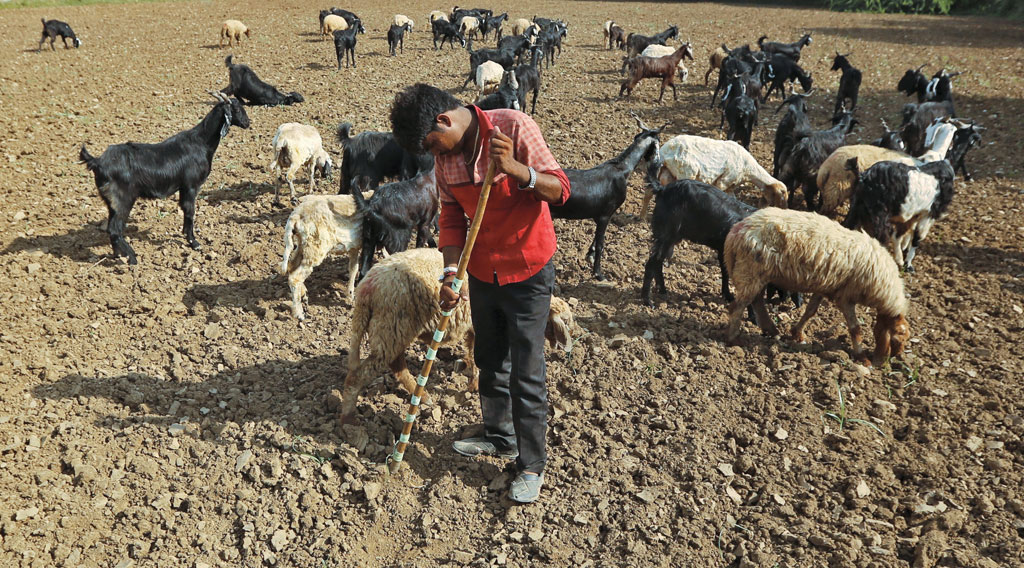 The images are familiar, though stark. In Madhya Pradesh and Uttar Pradesh, police have been deployed to guard precious pools of water in dry beds of big tanks and rivers. Children in Madhya Pradesh’s Umaria district, instead of heading to school, join mothers in hopeless journeys to search for water. It is now a common sight: villages in Madhya Pradesh transport water from far away tubewells to store it in dry dug wells for their use. In Dhar district’s Chandawat village, the only source of water for 800 households has vanished this year. The village used to get water from a pond 5 km away and would store it in a dug well. But that pond has completely dried. “We now fan out to far away villages with bottles to beg for water,” says Hare Singh, a resident of Chandawat.

Women in the Marathwada region of Maharashtra trudge up to 9 km, spending almost half a day to collect two buckets of water. In Latur, the town that is in news for water scarcity, Section 144 of the Criminal Procedure Code has been declared around water bodies, prohibiting assembly of more than five people at one place. In north Karnataka, residents leave villages early morning to scavenge water from any possible source, sometimes digging a metre into dry river beds and wait for hours to collect water as it seeps through.

And it is just April; the rain is two months away. Recent official estimates say water level in 91 major reservoirs of the country is just at 23 per cent of their capacity. As power stations bring down electricity generation due to water scarcity, city after city faces long power cuts. Amid this gloom, the government thought the word drought was too political. So now the India Meteorological Department will use terms like “deficit monsoon”, leaving the word drought to be used by “others”.

Half of India is under the grip of the second consecutive double-digit deficit monsoon, to use the official terminology. The last time the country witnessed such a situation was in 1965-66, when famine-like scenarios were triggered and widespread starvation deaths took place. At present, some 200,000 villages across the country are without water within their respective geographical boundary. Some 60,000 tankers in 10 states, and a train, have been deployed to provide water. Crops spread over 15 million hectares are under threat, while governments promise a drought-relief operation, allocating a miniscule Rs 20,000 crore. Preliminary estimate shows over 330 million people are affected by the current drought spell. 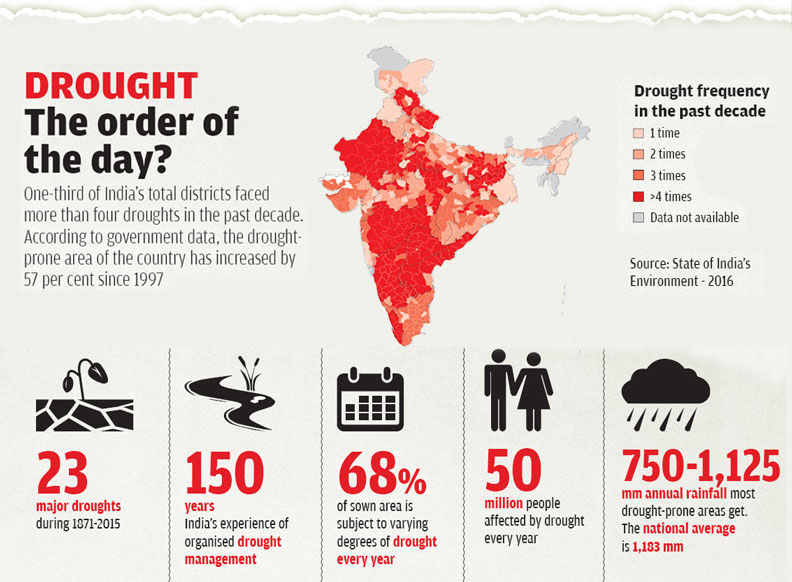 But why does the country face a crisis every time it goes through a drought? Officially, drought is a permanent disaster that strikes, on an average, 50 million Indians every year; 33 per cent of the country is chronically drought-affected while close to 68 per cent areas are drought-prone. India has more than 150 years of experience in drought management. Despite this, every time the country faces a deficit monsoon, we plunge into a crisis.

Is the drought of 2015-16 different from other droughts? No. Like previous years, this time too India has just reacted to a situation. Though in all these years our policy has been to drought-proof the country instead of just embarking on drought relief operations. Since the 1965-66 drought, it has been an official policy to prepare villages to fight drought by investing in works related to soil and moisture management.

As they say, drought is a disaster one can see coming. Deficit monsoon creates situations for a drought. But it is not deficit monsoon, rather the lack of policies and mechanisms to drought-proof susceptible areas that turn the situation into a crisis.

Arguably, the current drought shouldn’t have been so unbearable. In the last six decades we have spent more than Rs 3.5 lakh crore on water conservation and drought-proofing. Particularly, in the last one decade, the Mahatma Gandhi National Rural Employment Guarantee Act (MGNREGA) has helped create, on an average, 21 water bodies in every village. Some 12.3 million water harvesting structures have been built. Sixty-four per cent of the total expenditure under MGNREGA was on agriculture and agriculture-related works. From its inception in 2006 to March 2016 , the government has spent over Rs 3 lakh crore on MGNREGA. Of this, according to an estimate of the DTE-CSE Data Centre, Rs 2,30,000 crore has been spent as wage or money that has gone to people directly. We have a better monsoon forecasting system than we had before and our crisis response management has improved. The drought, therefore, should have been easy to tackle. But still the capacity of rural areas to tackle drought is quite poor. Probably, the ravages of nature the country witnessed in the past five years have something to do with it. In 2009, a severe drought year that crippled more than half of India and impacted 200 million people, the situation was not that bad because the winter monsoon was more than normal and people harvested a bumper rabi crop. This compensated for the loss of kharif crops. But in the past two years, the country has gone through two consecutive double-digit deficit monsoons as well as a below normal winter monsoon. In January-February this year, the rainfall was 57 per cent less than normal—the lowest in five years. Moreover, when it rained, it poured so heavily that the winter crop in the areas already reeling from the second consecutive drought was damaged. In the Bundelkhand region of Uttar Pradesh and Madhya Pradesh, this was the 15th consecutive crop loss. Such situations are going to be the new normal in the face of climate change. 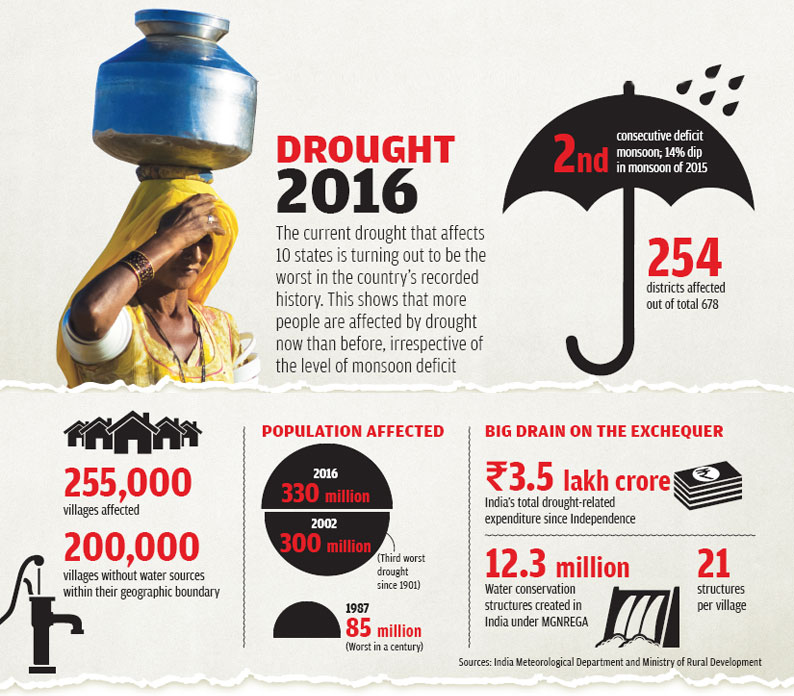 A 2006 study by the International Rice Research Institute in the Philippines and the Japan International Research Centre for Agricultural Science, in association with research organisations in Chhattisgarh, Odisha and Jharkhand, shows that drought is a key reason for the poor staying perennially below the poverty line. The study found that in every severe drought year, farmers in Chhattisgarh, Jharkhand and Odisha lose close to US $400 million. It found that in the three states, 13 million people who were above the poverty line slipped below it due to drought-induced income loss. According to “Some aspects of Farming in India”, a 2015 report by the National Sample Survey Office, farmers cited inadequate rainfall and drought as the biggest reasons for crop loss, particularly for the two most harvested crops—wheat and paddy. Farmers, on an average, suffer a loss of Rs 7,363 (one-fifth of their annual income) in paddy due to these reasons.

Drought and food security are critically linked. Drought-prone districts account for 42 per cent of the country’s cultivable land. With 68 per cent of India’s net sown areas dependent on rain, rain-fed agriculture plays a key role in the country’s economy.

For maintaining food security, even at the current nutritional levels, an additional 100 million tonnes (MT) of food grain needs to be produced by 2020. Realistically, the total contribution of irrigated agriculture to food grain production from both area expansion and yield improvement will contribute a maximum of 64 MT by 2020. The balance 36 MT will have to come from the rain-fed areas or the drought-prone districts. According to estimates, 40 per cent of the additional supply of food grain required to meet the rise in demand has to come from these districts.

So, it is not about whether our drought relief operations are effective. Rather, India can’t afford to have droughts any more. A long-term strategy to make India drought-free is the biggest message of the 2016 crisis.