Lumpy skin disease: The deadly pandemic that has taken root among India’s bovines

This will have a devastating impact on the country, where most dairy farmers are either landless or marginal landholders and milk is among the cheapest protein source 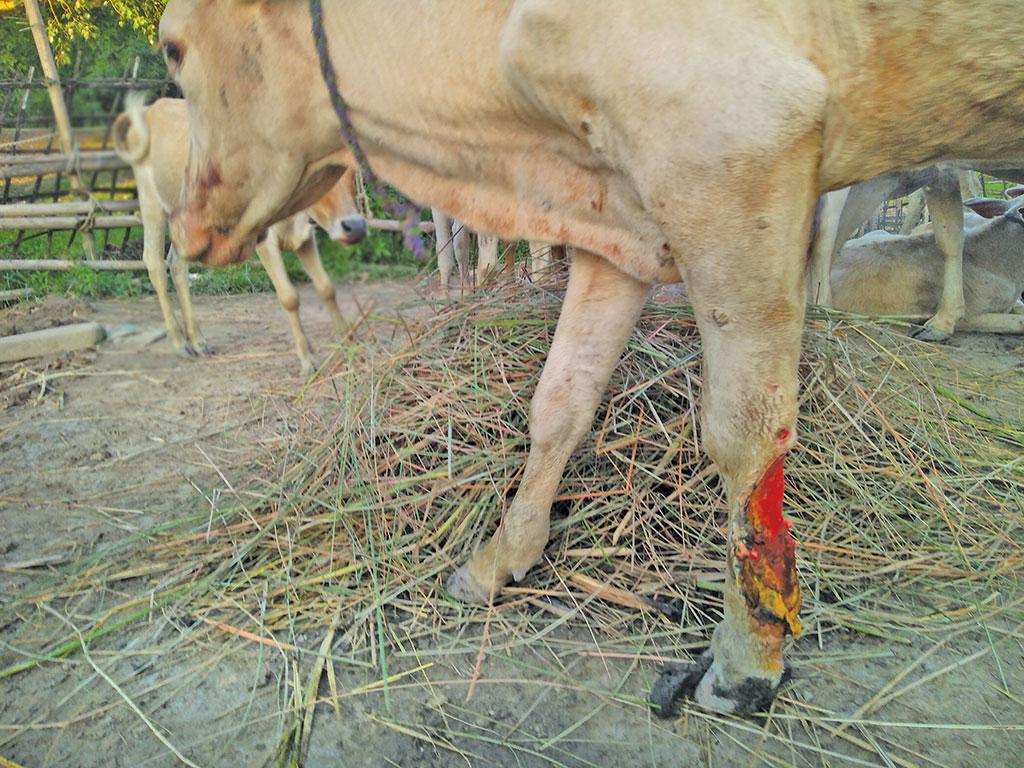 A strange but familiar fear has prevailed over the village of Kammana in Kerala’s Wayanad district since the beginning of the year. It was much like what the residents experienced around the same time last year, when the state reported India’s first novel coronavirus disease (COVID-19) case. This time the virus is different and so is the host, but the disease is equally contagious, unknown, stealthy and debilitating.

“I don’t know how and when three of my five Jersey cows contracted the disease,” says Saji Joseph, a resident of Kammana. All of a sudden, in the first week of January, lumps started appearing on their body accompanied by high fever.

Within a week, they have become emaciated, says Joseph, adding that he loses Rs 700 a day because of reduced milk yield. In this village of mostly dairy farmers, 200 other households face the same predicament. Even infected bulls and buffaloes are unable to pull carts or perform farm activities.

Local veterinarians have identified it as lumpy skin disease (LSD), a viral illness that causes prolonged morbidity in cattle and buffaloes. It appears as nodules of two to five centimetre diameter all over the body, particularly around the head, neck, limbs, udder and genitals.

The lumps gradually open up like large and deep wounds. In some cases — under 10 per cent according to the Food and Agriculture Organization (FAO) — the infected animal succumbs to the disease.

While the LSD virus easily spreads by blood-sucking insects like mosquitoes, flies and ticks and through saliva and contaminated water and food, veterinarians say no treatment is available for the disease, that is being reported for the first time in India.

Historically, LSD has remained confined to Africa, where it was first discovered in 1929, and parts of West Asia. But in recent years, the disease has spread to territories beyond the endemic areas. In 2015, it made an incursion into the European part of Turkey and Greece.

The next year, it created havoc in the Balkan and Caucasian countries and Russia. However, since its arrival in Bangladesh in July 2019, LSD is spreading across Asia in epidemic proportions.

According to a risk assessment report by FAO, the disease spread to seven countries till the end of 2020 — reaching China and India in August 2019, Nepal in June 2020, Taiwan in July 2020, Bhutan and Vietnam in October 2020 and Hong Kong in November 2020.

At least 23 countries in south Asia, east Asia and southeast Asia are now at risk of LSD, which is emerging as a trans-boundary animal disease, it says.

In India, which has the world’s highest 303 million heads of cattle, the disease has spread to 15 states within just 16 months. In fact, in August 2019, when the first outbreak of LSD was reported from Odisha, five districts were grappling with the exotic cattle pox.

Worse, studies suggest the virus could have already mutated in the country. Vandana Gupta, assistant professor at the College of Veterinary Science Animal Husbandry, Jabalpur, who is studying gene sequences of the samples collected from infected cattle in Madhya Pradesh, has found that the strain is different from the one isolated in Odisha during the first outbreak.

“We need an urgent prevention strategy. The disease might behave differently here than how it behaves in other countries. Since LSD virus is related to sheep and goat pox, we need to understand whether it can transmit to sheep and goats as well,” she warns.

Due to the infectious nature of LSD and its implications on the economy — decreased milk production, abortions and infertility and damaged hides due to cutaneous nodules and fibrous tissue growth cause significant economic losses to farmers — the World Organisation for Animal Health (OIE) declares it as a notifiable disease.

This means a country must inform OIE about any outbreak of the disease so that it can be contained. Yet, no consolidated figure is available with the Department of Animal Husbandry and Dairying (DAHD) regarding the actual spread of LSD in the country or economic losses incurred by farmers.

Unofficial estimates show at least 5,000 heads of cattle might have contracted LSD in Kerala alone since December 2019. When contacted by Down To Earth (DTE) Vijay Kumar, in-charge of livestock health at DAHD, said, “Total confirmed real positive cases are 30 to 40 per affected state. Since it resembles other skin diseases, people confuse those with lumpy skin disease.”

Satyajit Doley, a young cattle farmer from Dhansiri Mukh, a village on the eastern fringe of the Kaziranga National Park in Assam, is testament to this lackadaisical attitude of the authorities towards LSD.

Doley first observed round and stiff lumps on the front legs of his cows when the waters from the first cycle of flood receded during the monsoon last year — almost a year after cases started erupting in India as well as in Bangladesh, its neighbour across the border.

Within a fortnight, four other cows showed similar symptoms with mild fever and almost negligible production of milk. By that time, the next cycle of floods had hit the state. Doley, who lives on the floodplains of the Dhansiri river that meets the Brahmaputra three kilometres (km) downstream, had to evacuate.

“But we could not get the animals to move who then probably drowned in the flood waters.” Soon, it spread to 100-odd cows in the neighbourhood. Doley and several others in his village notified the local government veterinary department but in vain. The authorities sprang into action much later only when the state government sounded an alarm about LSD affecting livestock across the state, Doley alleges.

Some states like Kerala have, however, been taking proactive measures to contain the spread of LSD. The state’s Dairy Development Minister K Raju tells DTE that the government has ensured frequent health check-ups of cattle in all districts and are concentrating on eradication of the disease.

Veterinary hospitals have been directed to provide all the treatments for free. However, he says, the challenge is no specific vaccine against LSD is available in India. Right now, the veterinanrians are following the protocols they would follow in case of a pandemic.

In Kammana, they have asked Joseph and other dairy farmers to spray disinfectants in cattle-sheds several times a day to eradicate flies and mosquitoes that act as vectors of LSD. In case of death of an animal, farmers have been advised to bury the carcass deep inside the earth. But more than that, they have been advised to quarantine the cattle even at the slightest symptom of the disease.

Tracing the source of infection plays a critical role in containing the spread of any contagious infection. But the authorities are still cluless about how LSD was introduced to India.

“We are not sure of the origin of the disease in India,” says Praveen Malik, animal husbandry commissioner at DAHD. “It has probably happened through mechanical transmission via vectors across the border or through illegal imports of cattle. Some vectors can fly a long distance riding on the air current or can spread through contaminated equipment or syringes. We have requested the National Institute of Veterinary Epidemiology and Disease Informatics to conduct a study of all factors that contribute to the spread of the disease,” says Malik.

FAO, in its risk assessment report, however, states the long porous borders between India, Nepal and Bangladesh allow for a significant amount of bilateral and informal animal trade, including cattle and buffaloes.

This may have favoured the spread of LSD in July-August 2019 between Bangladesh and India. Though Bangladesh has no formal cross-border trade with India, a value chain study by FAO notes: “Given the gap between supply and demand for animal protein in Bangladesh and disparities in livestock prices with India, unofficial imports of livestock including cattle and buffaloes to meet animal protein demand have been observed. The flow of informal cross-border movements of cattle from India to districts of Nepal, especially those bordering Bihar, usually by foot, likely led to the spread of the infection there.”

Whatever the reason may be, analysts say eradicating the disease from India may not be easy.

As of now, several states have authorised the use of goat pox vaccine for treating LSD as the virus is antigenically similar to sheep and goat pox. It needs to be administered on all cattle within 5 km zone of the epicentre.

But a veterinarian based in Kannur in north Kerala tells DTE on the condition of anonymity that they have received “only 3,000 vaccines” against the demand of 7,000 units. Kumar says vaccination and treatment are secondary measures.

“We have issued advisories to states to follow biosecurity measures, putting checkposts on borders for interstate movement, and isolation.” But such protocols are barely followed in a country where livestock is mostly raised by landless or marginal farmers and under backyard systems.

In Thakpali village of the tribal-dominated Malkangiri district of Odisha, the residents allege that their cattle might have contracted the disease from herds that travel through their villages.

Every month traders from Chhattisgarh transport 8,000 to 10,000 heads of cattle to Andhra Pradesh via Kalahandi and Malkangiri. No one monitors the trading, let alone the health of the cattle, they say.

Malik admits that stray cattle could be a major reason for the spread because there is no supportive or symptomatic treatment for them nor does anybody apply fly repellents on them.

The 20th Livestock Census, done in 2019, shows the population of stray cattle has increased in 20 states since the previous 2012 census. “The state government will have to come up with a solution to address the issue. We will support them if they require any technical or funding assistance,” he adds.

Unless eradicated on a war footing, changing climate and poor animal healthcare infrastructure will act in favour of LSD.

“The disease can be checked if the animal is treated within the initial few days. But most of the times, people do not give importance to skin diseases in cattle. They think it will heal naturally. At places where farmers are aware, veterinary service is either not available or not affordable,” says P Selvaraj, professor, Tamil Nadu Veterinary and Animal Sciences University, Chennai.

Insects like ticks, biting flies, mosquitoes are anyway more prevalent in tropical climatic conditions of India. As unseasonal rains and floods become frequent, they will provide a conducive atmosphere for insect growth and multiplication and infectious disease vectors will no longer be restricted to a few months, he adds.

This will have a devastating impact on the country, where most dairy farmers are either landless or marginal landholders and milk is among the cheapest protein source.