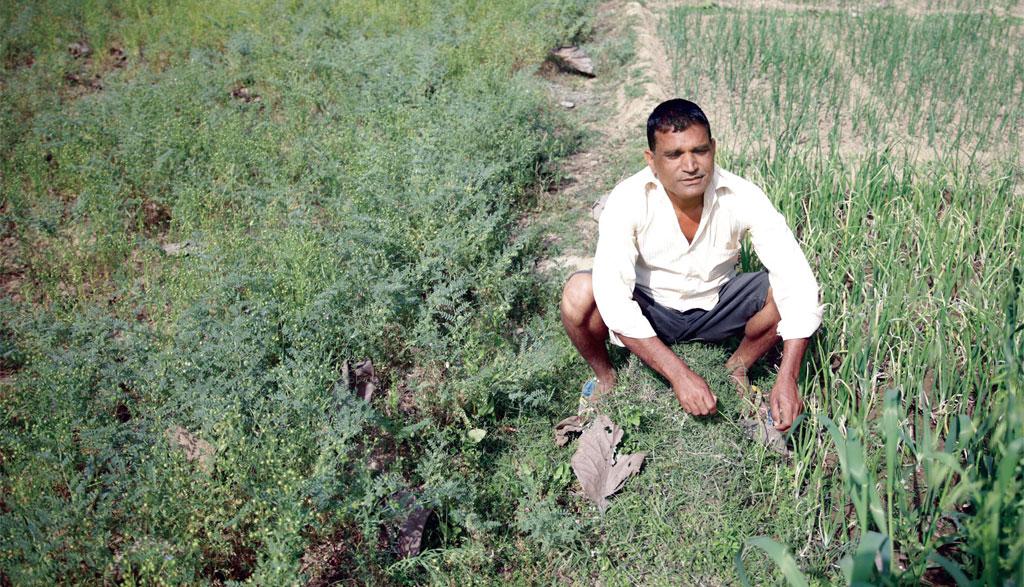 Farmers in Gorakhpur are growing a greater number of crops on the same piece of land, thus increasing cropping intensity

When Kamlesh Nishad, a farmer from Badhani village, Gorakhpur, Uttar Pradesh, returned home after giving up a job of a contractor in Panipat, he knew his life was going to change. The contractor’s job used to pay him just Rs15-18,000 each month, and that too was erratic. He took a cue from his wife who used to train farmers to make their profession more profitable. The couple began their experiment by taking a lease on a piece of land (about 1.35 hectares) in April last year. The input cost was barely Rs 50,000. “We now earn Rs 30,000 each month,” says Kamlesh.

The secret of his success is multi-crop farming, where several crops are grown at the same time and the land is used as much as possible. Kamlesh grew three types of crops, generally vegetables, sowing one crop on top of the other through layering. He erected a canopy-like structure, where he grew several varities of gourd and used the ground to grow leafy vegetables. Last year, he cultivated pumpkin, cucumber, spinach, radish, chickpeas, onion and coriander. The couple implemented techniques they had learnt in the training, such as time management for each crop. Kamlesh is one among 300 farmers in Gorakhpur who have benefitted from multi-cropping. And in doing so, they have only revived the region’s ancient traditional farming practises that enabled them to fight erratic weather conditions.

Farm sensitivity
It all began in 2011 when the Gorakhpur Environmental Action Group (GEAG), a non-profit based in eastern Uttar Pradesh, realised it had to reach out to farmers who were losing their crops frequently due to erratic weather conditions. Eastern Uttar Pradesh, especially Gorakhpur district, faces twin problems—it is chronically flood-prone and often faces drought. The region is served by the river drainage system of Ghaghara, Rapti, Rohin, Kuano and their tributaries, and is inundated during the rainy season. Today, areas that experience waterlogging have increased, which has affected the livelihoods of small and marginal farmers.

GEAG selected 15 villages, which were located on low-lying areas, and were perennially waterlogged. Their task was to make the livelihoods of farmers more resilient. “Kno-wing our limitation, we selected two farmers from each village and trained them to become model farmers. Our aim was that these model farmers would motivate others to follow sustainable methods,” says K K Singh, project coordinator of GEAG.

While evaluating their project, GEAG found that crop diversity had increased by 42 percent in Gorakhpur. Moreover, cropping intensity—the number of crops planted annually, which is an important measure of resilient livelihoods—had also increased. 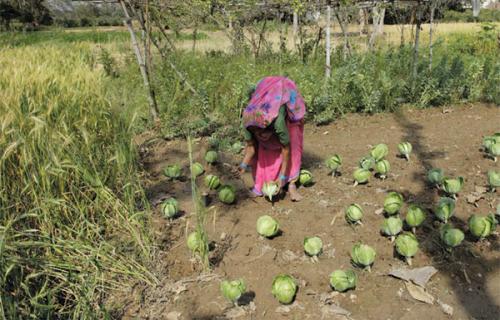 Ram Asare Yadav, a farmer, says he now cultivates several crops on the same piece of land, and it is all about time management. “We were taught in the training that if we sow wheat before November 15, we can harvest more than 300 kg on even 0.404 hectares of land. Small tips can make a huge impact in our lives. We have learnt about the growth cycle for all crops,” he adds.

Yadav harvested wheat, mustard, gram, pea and potato. Subsequently, he planted maize, peanuts, ladyfinger, double beans and varieties of gourd. In July, he planted paddy, tur daal and many other crops. Now there is an increasing interest among farmers to grow vegetables, as farmers have realised they can save money if they grow the vegetables they consume.

The return of millets
Ram Niwas Maurya, another farmer, recalls that millets were commonly grown in Go-rakhpur district about 40-50 years ago. Over the years, people developed an incorrect perception that these foods were for poor people. He realised its importance when he learnt about multi-crop farming after coming in contact with GEAG about five years ago. Earlier, he used to cultivate barely four to five crops a year. Now he cultivates 85 crops.

Singh says millets have more resistance capacity, and can survive even in adverse, uncertain and changing climatic conditions. It can also bear floods and short duration droughts and provide better yields. Millets have more nutritional ingredients and grea-ter scope to make profits.

In Gorakhpur, rice cultivation often suffers due to climatic conditions and this affects the livelihoods of small and marginal farms. Millets, on the other hand, consume less water and have the capacity to resist waterlogging. Hence, in adverse conditions, farmers get protection as well as production. Some of the millets being grown include kodo, sawan, madua and tangun. Thanks to GEAG, Gorakhpur’s farmers have revived their ancient traditional methods of multiple crop cultivation. And they have set an example for small and marginal farmers across India on how to adapt to erratic weather conditions.

This story was first published in the June 15-30, 2017 issue of Down To Earth magazine under the headline "Multiple response".