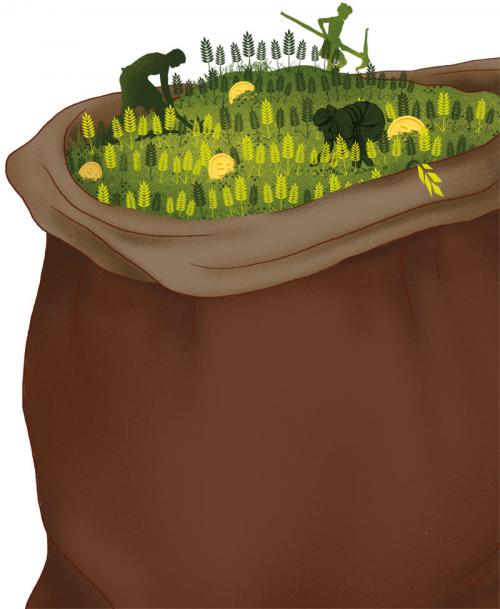 It’s hard to fathom that just 3.8 million hectares (ha) — 2.7 per cent of the country’s net-sown area — is under organic and natural farming despite two decades of government efforts to upscale the practices.

The Union government passed its first policy on organic farming in 2005, and introduced the flagship Paramparagat Krishi Vikas Yojana (PKVY) in 2015-16. Recently in December 2021, highlighting the ill-effects of chemical-based farming, Prime Minister Narendra Modi also appealed to make natural farming a mass movement in the country.

Some of the prime reasons that hinder the shift is a lack of conviction among policymakers; limited consensus among the scientific community in favour of organic and natural farming; and the tendency to evaluate the non-chemical agricultural practices only on the basis of yield.

The Centre for Science and Environment (CSE), a Delhi-based non-profit, has recently consolidated long-term evidence on holistic benefits of organic and natural farming.

It analysed the results of 89 scientific studies, conducted across the country over the last decade, and the findings of government’s own All India Network Project on Organic Farming (AI-NPOF) going on in 16 states since 2004.

In the report, Evidence (2004-20) on Holistic Benefits of Organic and Natural Farming in India, they state that organic and natural farming are not only profitable and sustainable but also productive when compared with the chemical-dependent inorganic farming.

Long-term trends of crop yield from the AI-NPOF experiment show that the organic approach is better than inorganic and is at par with integrated (a mix of organic and inorganic) methods.

Of the 504 times yield results were recorded during 2014-19, some 41 per cent of the times yields were highest with the organic approach, followed by 33 per cent with integrated.

Evidence collated by CSE from other scientific studies further adds to this evidence. These studies have found that in crops such as spinach, baby corn, broccoli, potato, lady’s finger, tomato, onion, chilli, pigeon pea, cowpea, black gram, rice, ragi, pearl millet, wheat and banana, yields can be higher with organic and natural farming in comparison to inorganic.

Some also find a positive role played by seed soaking with liquid manure, mulching and intercropping in organic farming. After switching to organic practices, crops such as wheat, maize, rice, cluster bean, sesame, cumin and psyllium husk take a few years to produce a comparable or more yield than inorganic, while crops like potato take a year, the findings show.

AI-NPOF project shows that the cost of cultivation is higher with the organic approach than integrated. The CSE report explains that the high-cost is because organic and bio-inputs used in AI-NPOF are largely purchased from the market. Whereas, organic inputs cost is less if produced on-farm by farmers.

Other scientific studies suggest that in the case of natural farming, yields may not always be high for all crops, but the benefit-cost ratio is several times higher than inorganic.

Along with minimised cost of production and premium prices for the produce, incomes and profits under natural farming are higher than conventional farming.

On an average, even without certification, produce from natural farming fetches twice the income of conventional farming, suggest the studies. Moreover, they, say use of cheaper eco-friendly biofertilisers also makes organic farming a low-cost alternative to chemical methods. 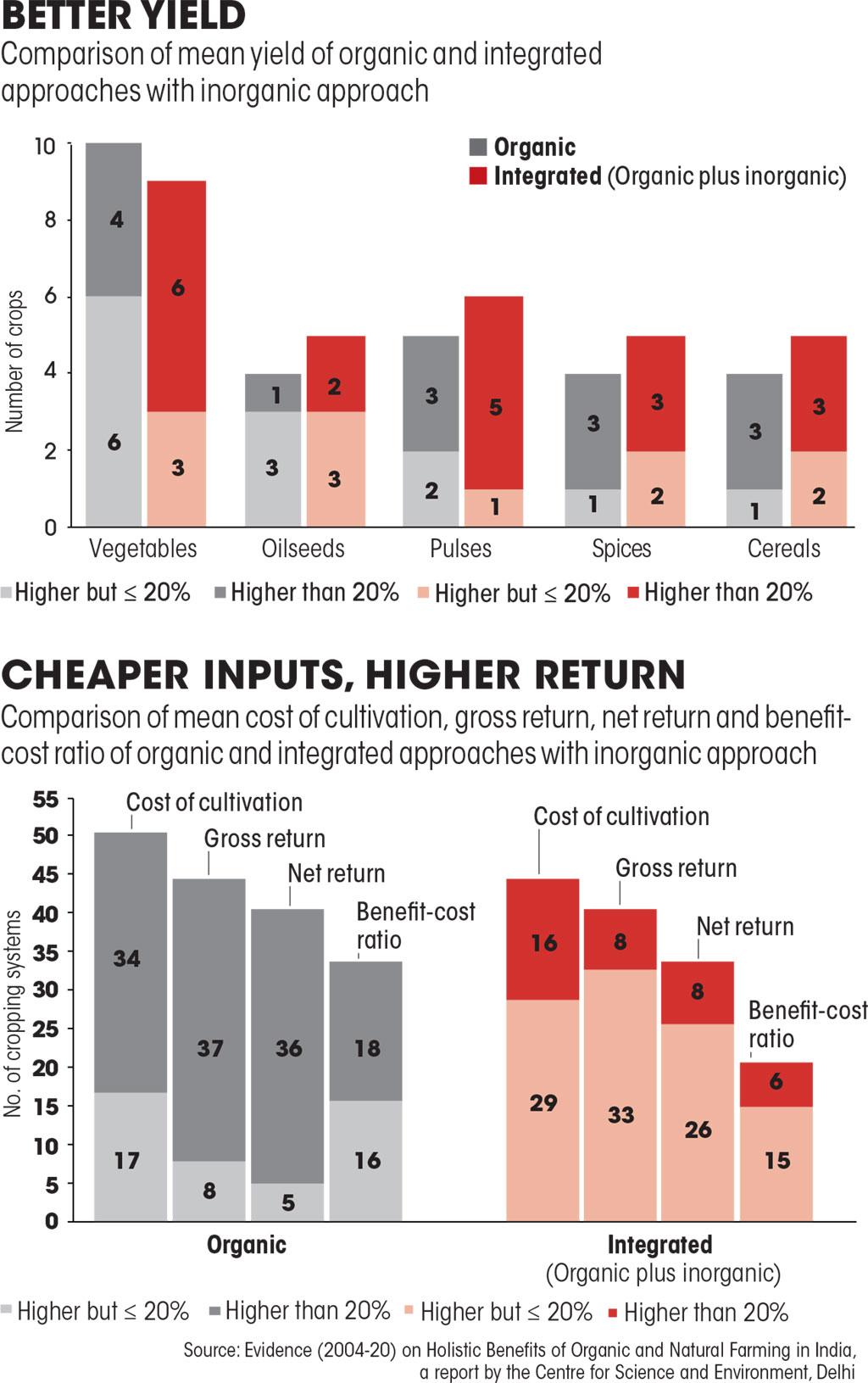 Healthy soils are the basis for healthy food production. And the AI-NPOF project shows that the organic approach is better at ensuring soil macro- and micro-nutrients, organic carbon and rhizosphere microbiome.

Soil micronutrients like iron, manganese, zinc and copper are also higher (by 76 per cent) with organic approach.

Though the integrated approach led to better results than inorganic in all cases, suggesting that lesser chemicals lead to better results in sustainability parameters, AI-NPOF results show that organic is even better than integrated in all except the cases of potassium, iron, manganese and bulk density.

The studies highlight that ZBNF can help prevent over-extraction of groundwater, enable aquifer recharge and contribute to increasing water table.

Evidence collated from the other scientific studies show that the quality parameters like total carotenoids, total soluble solids, vitamin C, total sugars and lycopene are higher with the organic approach in vegetables and fruits.

Organically grown maize, strawberries and marionberries have significantly higher (around 30 per cent) levels of cancer-fighting antioxidants. In the case of papaya, the quality parameters were higher with organic as compared to recommended dose of fertilisers. Organically grown taro had higher nutrient content.

It is important that the country’s larger scientific community, trained in chemical-based agriculture, does not outrightly reject the evidence due to any bias and instead carefully review results of the work done by its scientific colleagues in different parts of the country.

They can play a crucial role in spreading awareness, building capacity and influencing policymakers. It is also important that the advantages of organic and natural farming should not be evaluated only on the basis of yield.

Benefits of organic farming related to profitability and sustai-nability strongly outweigh those with inorganic approaches.

The existing programmes to support organic and natural farming should therefore be scaled up, expanded and properly funded.

Develop a roadmap that sets the long-term agenda for adoption of agro-ecological approaches across diffe-rent parts of the country in view of its holistic benefits such as nutrition, livelihood of farmers, natural reso-urce conservation, biodiversity, res-ource efficiency, soil-health, disease resilience and mitigation of climate crisis.

This roadmap should also consider mechanisms for incentivi-sing farmers to adopt agro-ecologi-cal practices such as payments for ecosystem services, and specifically focus on supporting farmers during the transition to organic and natural farming through technical and financial support.

There is an urgent need for a targeted, ambitious and well-funded nationwide programme to drive the change. This includes bringing together ministries and programmes; outlining the centre-state relationship in terms of funds, accountability and coordination; and establishing a vibrant market.

Measures to adequately produce and make available quality organic fertilisers and biofertilisers at low cost should be the priority. To help agriculture extension system support the transition on the ground, a capacity among extension officials should be developed.

The organic certification process should be improved to make it farmer-friendly and low cost. Measures should be taken to address concerns about PGS-India (Participatory Guarantee System of India) certification system and its implementation.

An alternative certification that is simpler for farmers and trustworthy for consu-mers could be explored for well-connected local markets. The problem could be addressed by introducing a traceability mech-anism. States should step up action to promote organic and natural farming.

They can be instrumental in helping farmers sell organic and natural produce by developing value chains, procuring produce and getting remunerative prices.