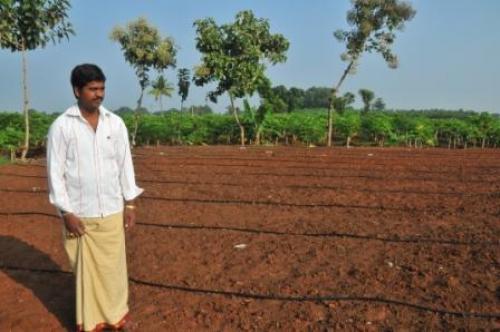 The NITI Aayog has put out a draft concept report seeking private participation in managing and boosting the reach of micro irrigation across the country.

Known as the “Draft Model Public Private Partnership Policy Guidelines in Integrated Micro-Irrigation in India”, the report points out that the non-availability of government fund is the key reason to push for private investment in micro irrigation. For the first time, the government is seeking private investment in micro irrigation that operates at a local level.

Out of India’s 65 million hectares (ha) under irrigation coverage, only 8.6 million ha is under micro irrigation such as drip and sprinkler. “With the target of the Government of India of achieving 0.5 million ha per annum coverage under micro irrigation (MI) with a budget of just Rs 1,000 crore (US $ 156 million) under PMKSY (Pradhan Mantri Krishi Sinchayee Yojana, it will take at least another 100 years to reach the overall MI potential in India,” argues the draft note uploaded on the NITI Aayog website for comments from public and government departments.

Under the proposed private-public partnership, the private player would pool in resources to build and maintain infrastructure for micro irrigation projects. Farmers would consolidate their farms to provide the scale needed to make private investment profitable for them.

“The project is proposed to be implemented under an organised participatory farming framework, wherein the farmers shall pool in their land holdings in order to obtain economies of scale,” the draft report adds. For lands belonging to the government, respective state governments would make it available to the private player to set up infrastructure like pump houses.

“All primary beneficiary farmers, who own the land which shall be pooled for the implementation of the MI network, will form a farmer producer company (FPC) and become its members. FPC members will also be members of an active water user association or the land belonging to the members pooled to implement the integrated micro irrigation network that falls under the command area of an irrigation canal. This will, in-turn, ensure that the cluster of the land identified for the implementation of the project will have a sustainable source of water,” says the report. Farmers have to pool in a minimum of 1,000 ha and a maximum of 10,000 ha to help government seek private investment.

The proposal is similar to the usual model of private-public partnership for infrastructure projects like highways. Farmers, after a concession period of 15 years, would bear all the operation and maintenance costs, as fixed by the private player and the government. To begin with, governments would make payment to private players for setting up infrastructure and maintenance costs.

Once the concession period is over, farmers would have to channelise their input subsidies from the government to private players to sustain the irrigation infrastructure. “Beneficiary farmers on receiving subsidies from the government for implementation of on-farm MI and solar equipment would transfer the same to the concessionaire,” the report says.

As irrigation is a state subject, the draft has proposed the state governments to formulate “appropriate guidelines or provide approvals to enable private partners to collect user charges from beneficiary farmers and/or to evaluate other commercial options which the project proponent may propose to successfully execute the project.”