Promoting permaculture can put an end to GMO culture in India 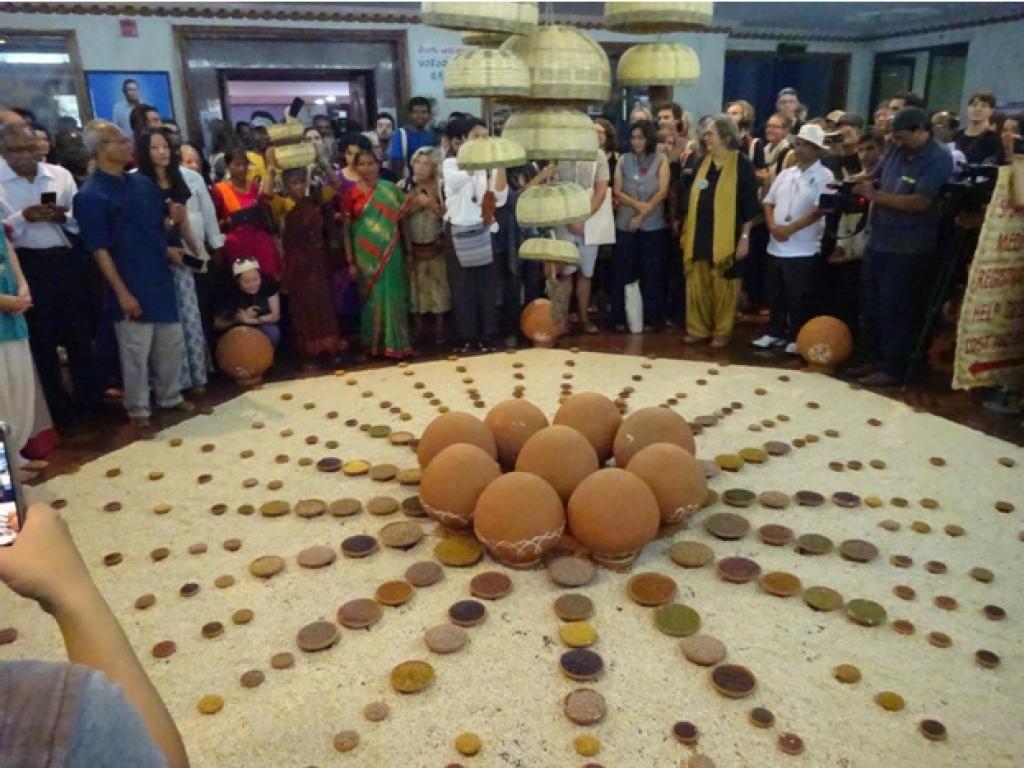 The 13th Permaculture Convergence began on a highly symbolic note at the Prof. Jayashankar Telangana State Agriculture University, Hyderabad on November 25, 2017. The conference started with sowing of seeds and inauguration of seed box, which consisted of traditional variety of seeds. The senior most women farmer carried the basket full of seed on her head and prayed to the Lord for abundant and continuous production.

Permaculture practitioners and enthusiasts from over 63 countries have assembled at the conference.

Besides the sessions by various speakers, there were exhibitions on eco-friendly products and also sessions on farmers’ stories, where they narrated their success stories.

Permaculture: a shield against GM crops

The focus of the event has been rightly on seeds, given the current situation when we are losing biodiversity of seeds as farmers are taught to buy them from external agencies and not produce them on their own. GM crops have been flooding the Indian markets. Speaking at the event, environmental activist Vandana Shiva says, “Monsanto got the license to say ‘we are the creators of life on earth’. So, GMO means Gods move over; no creator no creation. There is a Supreme Court judgment in the US, judges said that a seed is a self-replicating machine invented by Monsanto and a farmer saving seed and planting seed is deemed the intellectual property of self-replicating machine. But according to the Patent Law in India, animals and plants cannot be patented. So, the company convinced others not to sell the seeds and dumped the BT cotton—the first GMO crop”.

This has led to increasing cases of farmer suicides and crop failure. But practising permaculture, on the other hand, ensures fair trade for the farmers, as the input cost is less and it does not have the concept of loans and debts. As the farmers save the seeds and use it for next cropping season, the cases of capitalisation of seed, branding and patenting will reduce and famers will have their own stocks.

According to her, by 2047, all of India should be poison-free, chemical-free, debt-free and suicidal-free with people realising that permaculture, natural farming, agro-ecology, sustainable farming and seed sovereignty is the real future of India. “That’s the new India out of the enslaved chemical green revolution,” she concludes.

Sultan Ahmed Ismail, an Indian soil biologist and ecologist, says that the farmers are being fooled by the ‘Soil Health Card’. The card, provided by the government only gives information on soil fertility and not soil health. He says that the card only show the quantities of nitrogen, phosphorus and potassium present in the soil. Based on this data, the government prescribes quantities of fertilisers to be used.

In this process, according to Ismail, we forget the vital role played by the organisms. Moreover, due to overdose of fertilisers, these microorganisms are destroyed and, in return, the soil health gets affected. Thus, the Soil Health Card is misleading the farmers. He says the in permaculture, the soil is seen as a holistic system and only that will replenish and maintain the soil and not the soil card.

“Most of the communication in farming is top down, and the communication among farmers is missing now. It is important to create a platform for farmers to interact with other farmers. Scientists should also learn from the farmers by working in the field and not in the lab,” says Ismail.

“For a farmer to have a fair trade, market needs and consumption pattern has to change. People want to eat only few crops, but more awareness needs to be spread about the indigenous crops and farmers should be encouraged to do multi-cropping, instead of mono-cropping, says Vithal Rajan, founder and chairperson of Deccan Development Society, an agri-based NGO in Medak district of Telangana.

He also adds that the middleman involved in trade are actually getting all the profits and not the farmers and that is why we are struggling to make the supply chain directly from framers to consumers. This is possible only by practicing permaculture.