A record production of pulses is in the offing. But neither farmers nor consumers stand to benefit because the government is withdrawing procurement from farmers and flooding the market with imported pulses

A bumper harvest has not brought down retail prices. Consumers are still buying moong dal for I115-125 per kg and tur dal for I120-140 per kg

WHEN KEY pulses started hitting record prices since May last year, millions of farmers across the country began to cultivate them anticipating high income. Anil Mandage, a small farmer from Pimpri Gawli village, Ahmednagar district, Maharashtra, is one of them. His 1.2 hectare (ha) farm helped him produce one tonne of moong dal (green gram) this season. Unfortunately, no trader could offer him a decent price—the wholesale price of green gram has today dropped to below I30,000 per tonne. It was I60,000 per tonne when Mandage started sowing. When he turned to the government procurement centre, his produce was rejected on the grounds that it had a high moisture content. “The Marathwada region received heavy rainfall at the fagend of this monsoon season,” says Mandage. Only 12.5 tonnes of moong was procured from 7,000-odd farmers in seven villages of the district.

Mandage’s story repeats itself across India. For instance, in Harda district, Madhya Pradesh (MP), the market price dropped from Rs 70,000 per tonne in May this year to around Rs 35,000 in October. Conflicts are brewing across the country as government procurement centres are rejecting the bumper harvest. The district’s farmers produced over 39,600 tonnes of moong dal this year. “But only 110 tonnes was bought by the government procurement centre from over 106,000 farmers in the district during the past month—about 1 kg from each farmer. They make various excuses for not procuring. This is leading to everyday skirmishes between farmers and government officials,” says Kedar Sirohi, a farmer from Harda district. “The market is offering Rs 40,000 per tonne for the best quality of moong, which is way below the Minimum Support Price (MSP) of Rs 52,250 per tonne,” he adds.

In Gujarat, Maharashtra and Rajasthan, the market price for moong has crashed to below Rs 30,000 per tonne. “We switched to large-scale pulses farming because of the rising prices and government assurances, but when the time came to reap the harvest, the market tanked,” says Asuram, a farmer from Bikaner district, Rajasthan. Govern ment estimates reveal that it has procured only 3,300 tonnes from 330 farmers in 200 centres in Karnataka, Telangana, Maharashtra, Andhra Pradesh and MP—that is about only 16.5 tonnes from each centre. 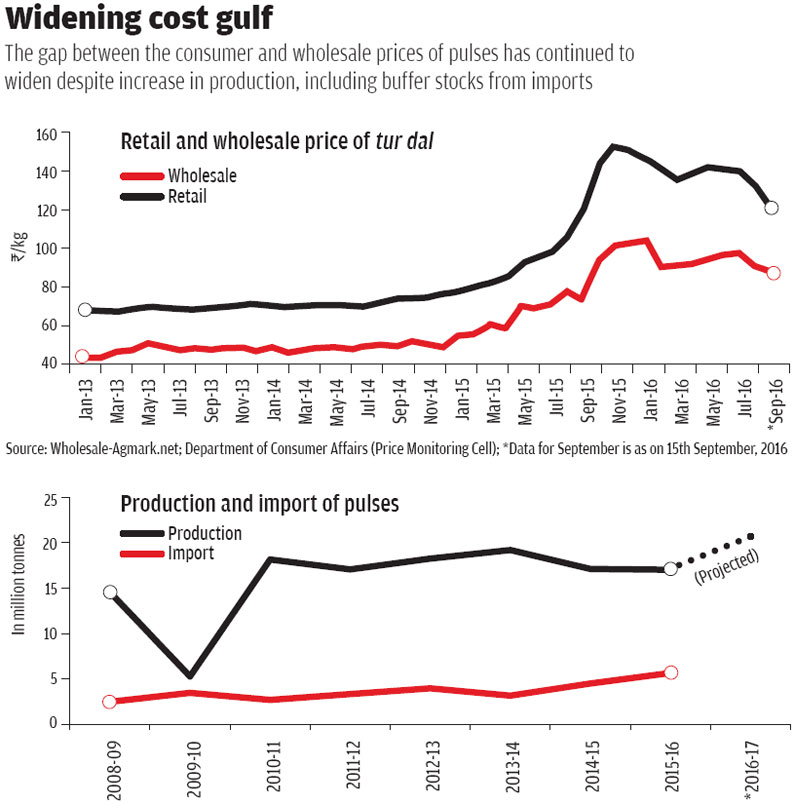 The crisis is only going to worsen. The tur dal (pigeon pea) harvest will arrive during mid-November, but the market rate for tur is already below the MSP of Rs 48,500 per tonne in many states. Former Union Agriculture Minister Sompal Shastri says, “If you see the gap between the market price for farmers and MSP, and the gap between MSP and retail price, you will understand the agrarian crisis, especially for pulse producing farmers.”

Ironically, a bumper harvest has not brought down retail prices—consumers are still buying moong dal for Rs 115-125 per kg and Rs 120-140 per kg for tur dal. Before the crisis last year, moong dal was sold for about Rs 50 per kg and tur dal for about Rs 60 per kg. As the government is stepping away from procurement, farmers have been forced to sell their moong pulses at Rs 30-35 per kg to traders. So neither consumers nor farmers are gaining from the bumper production.

One reason traders are not able to buy from farmers is the stock limit guidelines, which are revised every month. In August, traders had a limitation of holding stocks between 1 and 3.5 tonnes in different dal-producing states. “Such policy limitations discourage traders to buy and stock pulses fearing raids,” says P Chengappa, associate professor with the Institute of Social and Economic Change, Bengaluru.

Pulses are more prone to pests than cereals, so it requires proper storage facilities. And without a robust distribution system the buffer stocks will rot, as was the case with onions, says Chengappa. Ramesh Chand, a member of NITI Ayog, agrees that India requires more central warehouse storage facilities. “The government should stop importing pulses and procure it from domestic farmers,” says Mitesh Patel, president of Pulses Production Association, Gujarat. “It should also remove the stockholding limit,” adds Patel. The government has made it a habit of jumping from one crisis to another. Only this time, its policies have induced a unique crisis, one amid plenty.