Karnataka was the first state to adopt a policy on organic farming in 2004. Since then, several initiatives have helped farmers fight drought, but costly certification is discouraging poor farmers from taking it up 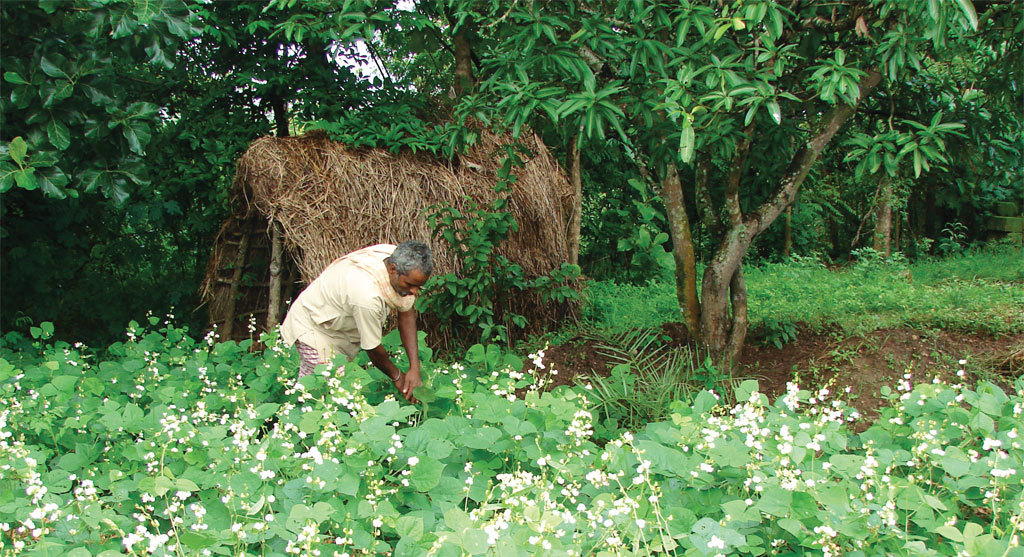 Prabhu Mediwala, a small farmer from Kamdhenu village in Dharwad district, has turned a rocky patch of land into an organic agricultural farm and doubled his income

These outlets provide a tiny glimpse of the organic movement Karnataka has been witnessing for the past 10 years. In Bengaluru alone, there were nearly 100 organic restaurants and outlets till 2013 and more than 82,000 hectares (ha) of land in the state is under organic cultivation, benefitting more than 166,000 farmers (see ‘Karnataka’s organic boom’, p21).

In March 2004, Karnataka became the first state in India to introduce a policy on organic farming. This was adopted in the midst of an agrarian crisis in the state that was leading to farmer suicides. “We wanted to reduce the farmers’ input cost by minimising their dependency on costly fertilisers and pesticides and save them from the vicious cycle of poverty and debt,” says H K Patil, former state agriculture minister. According to the 59th round of the National Sample Survey Organisation on agricultural crisis in 2002, Karnataka was among the top five states in India which had the highest agricultural household debt, averaging Rs.63,000. The high burden of debt drove 205 farmers to suicide in 2003. Such alarming statistics prompted the government to promote organic crops that are drought-resilient. 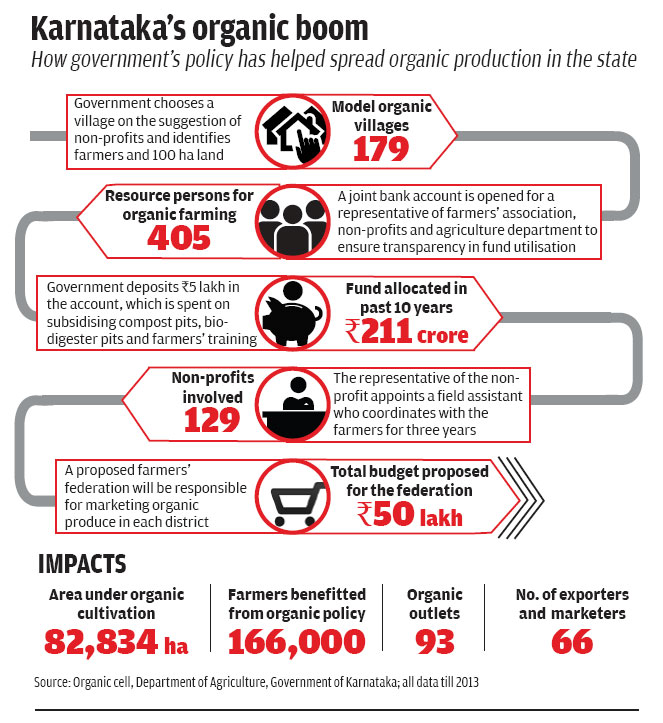 For this, the government roped in those farmers who were popular in the state for starting the trend of organic farming in early 1990s and have been successfully pursuing it for decades. These organic heroes include Muttalik Desai from Belgaum, Chinappa Budhial from Gadag, Veeranya Gowdapatil from Dharwad and Lalitha Adiga from Udupi, among others who have played a crucial role in kickstarting the organic movement (see ‘Ordinary farmers, extraordinary feats’). It is with their help the government has formed its organic policy. “I never miss a village fair as it gives me an opportunity to tell fellow farmers about the benefits of organic farming,” says 63-yearold Budhial. Desai helps small farmers prepare bio-pesticides.

One village at a time

The first phase of the policy implementation in 2004 was the Organic Village scheme, whereby it was planned to bring 100 ha of a village under organic farming in each of the 30 districts. The programme was taken to the next level after every three years—the time needed to turn a field into organic. In 2006- 07, it was extended to all 176 talukas in the state. When the Bharatiya Janata Party government came to power, it restructured the programme in 2010. Under the new model, interested farmers of a village could opt for organic farming instead of a fixed area being brought under organic cultivation.

The Congress, which returned to power in 2013, went back on its earlier model of bringing 100 ha of a village under organic farming. In 2013-14, the programme was extended to the level of hobli (group of panchayats) and renamed Savayava Bhagya Yojane. Currently, groups of farmers in 571 hoblis practise organic farming along with livestock rearing and supply food to citybased consumers. The government provides subsidy for construction of compost pits, vermi- compost, preparation of green manure and training and education of the farmers.

What started as a district-level initiative a decade ago has become a hit with the state’s farmers. “People are becoming health conscious and are opting for organic products. Organic farming helps farmers and is environmentally more sustainable,” Desai says.

While big farmers export their produce, the organic movement has helped small farmers find a domestic market, says Krishan Reddy, who grows organic mangoes in Hosur district. “Organic farming is not the conventional choice as the output is low. But this is compensated by reduced input cost. We also get a premium price for our products. Outlets like gpoe have widened the market for organic produce,” he says.

Organic farming has also proved to be a boon this year when 27 districts in the state are facing drought. “Conventional farmers are affected during a deficit in rain. Organic farming softens and moistens the soil, protecting it from drought,” says H Maruti, a small farmer from Harogeri village in Dharwad district who started organic farming in 2007. “When I grew only paddy, my annual income was merely Rs.50,000. Now I earn Rs.2.5 lakh by selling organic paddy and vegetables,” he says with a smile. He has built a pucca house and enrolled his children in an English-medium school.

Namdev Laxman from Hatori village in Belgaum was able to marry off his two daughters without taking debt, a rare achievement for a small farmer. He attributes this to organic farming. “By reducing the input cost and selling buffalo milk, I earned enough money to bear the expenses of the weddings,” he says.

Laxman now plans to take land on lease and expand the area under organic farming. In 2011, Bengaluru-based Institute for Social and Economic Change conducted an evaluation of the organic production. “The yield was 15-20 per cent low compared to conventional farming, but farmers’ income had increased by up to 50 per cent,” says R S Deshpandey who supervised the study.

The government initiative, however, is not without loopholes. Budget is emerging as a major constraint. The programme started with an investment of Rs.4 crore involving 2,511 farmers in 30 districts. During 2008- 10, the budget increased to Rs.50 crore. “Now when the number of farmers has increased, the budget has been reduced to Rs.9 crore. This has affected organic spread. It shows that organic farming is not getting the recognition it deserves,” says Krishna Prasad of Shaja Samrudha, a Bengaluru-based non-profit promoting organic produce. Pest is another emerging problem, farmers say. Maruti recently noticed the leaves of his ridge gourd crop turning yellow. He suspects pest attack, but is in a dilemma because he does not want to use pesticides. Certification, meanwhile, is an expensive and cumbersome process, which small farmers avoid. The certification process takes up to three years, and a farmer has to pay at least Rs.15,000 each year. As per the Bengaluru-based Research Institute on Organic Farming, farmers had applied for organic certification for 82,834 ha till 2010- 11. But only 38,000 ha were certified till 2012-13. “Farmers market their produce as ‘organically grown’ instead of ‘organically certified’,” says N Devakumar, a senior agriculture scientist.

Recognising these problems and understanding the need to sustain the movement, the government in April this year allocated Rs.50 lakh to set up a farmers’ federation at the district level to create a market for organic producers. This federation will also run organic stores. “We have started a group certification mechanism throughout the state whereby groups of farmers can certify their products and distribute the cost equally,” says Ashok Thubchi, member of the state advisory committee on organic farming.

But Patil fears that it is largely the big farmers who are reaping the benefits of organic farming by exporting their produce. “The small farmers are still struggling to find a foothold in the market,” he says.