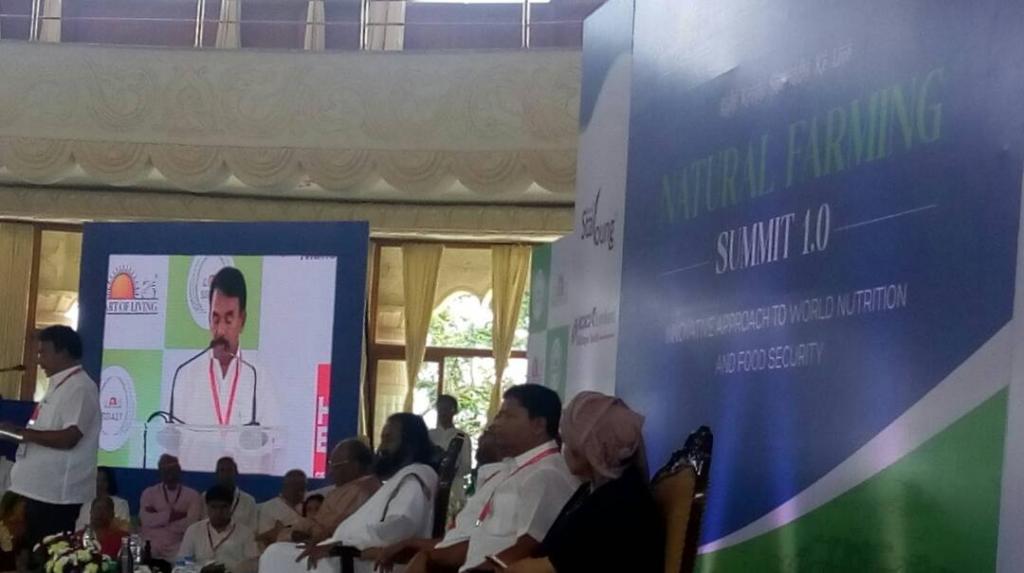 Presenting his views on genetically modified seeds at the Natural Farming Summit 2017 in Bengaluru on Tuesday, Kapil Shah questioned the “unethical tinkering of genes” for more productivity Credit: Subhojit Goswami

Genetically modified crops are “Terminator technology” that kills the basic instinct for survival, Kapil Shah, one of the pioneers of the organic farming movement, says.

Presenting his views on genetically modified (GM) seeds at the Natural Farming Summit 2017 in Bengaluru today (May 9), Shah questioned the “unethical tinkering of genes” for more productivity. The summit has been organised by the Sri Sri Institute Agricultural Sciences & Technology Trust SSIAST).

“Whatever the scientists do, are they always ethical? Not really. You would be surprised to know that India ranks 31 out of 72 cotton-growing nations. Interestingly, 21 countries, which do not use BT cotton, are ahead of India when it comes to productivity,” Shah adds.

Building on the idea that the problem of pest has multiplied over the past 50 years due to the increased use of pesticides—from just three pests in 1965 to 14 pests in 2015—Shah pointed out that genetically engineered crops are not a sustainable pest control strategy, as has been claimed. In fact, they are adding to the pest problem.

Citing the example of Gujarat where farmers are uprooting BT cotton crops after pink bollworm pests wreaked havoc, Shah said that those protesting GM crops are countering certain claims with the help of science. “We are not against science. We are the most scientific community, but we are against such science that tilts towards economy and profit and not ecology and sustainability,” he says.

There are so many varieties of plant species whose potential has not been explored yet. Shah substantiates his claim with the following figures:

Highlighting different peer-reviewed studies on the damaging aspects of GM crops, he referred to the fact that most countries are refusing to import BT crops. Shah also pointed out how the World Health Organization suspected in 2015 that glyphosate used in Monsanto’s herbicide and HT seeds are “probably carcinogenic to humans”.

Shah said GM mustard is not the final hurdle towards transitioning to natural farming as at least 72 crops in India are in the research pipeline for genetic modification.