Be it temple tanks or rainwater harvesting structures, South India had set the standard in water conservation. Now they are just forgotten traditions 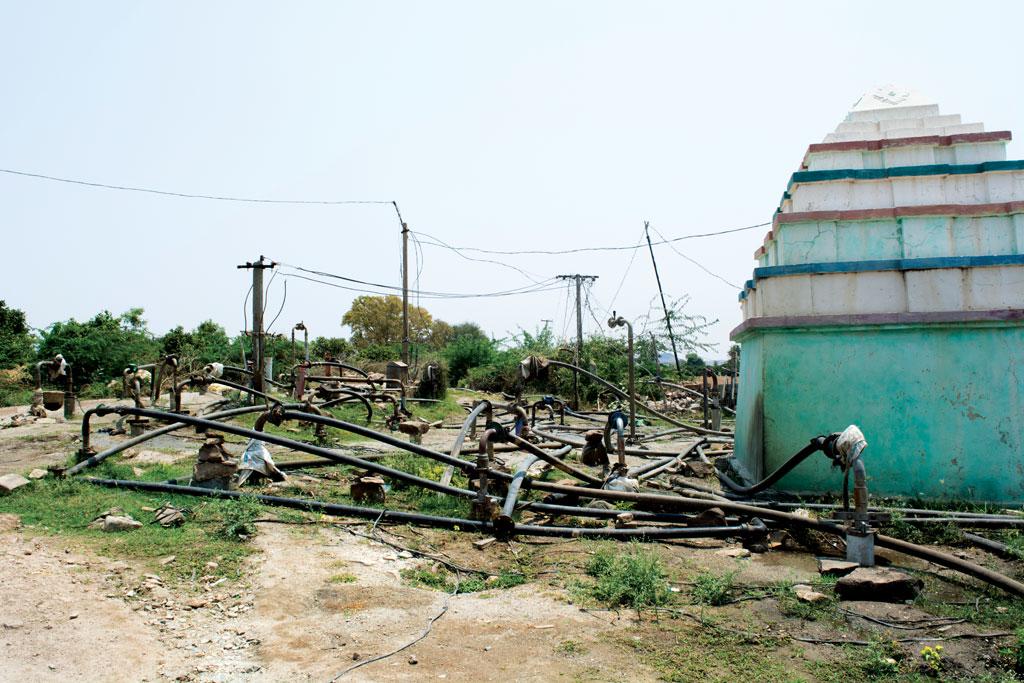 In Andhra Pradesh's Goddumarri village, people have drilled over 40 borewells on a 405 sq m community land next to a temple. This is causing the dry riverbed of the Chritravati, barely 500 metres from the temple, to cave in at places (Photo: Ayesha Minhaz)

Update (June 27, 2017): Water supply in Tamil Nadu capital Chennai has been halved amid a severe drought that has dried up all of the city’s four main reservoirs—Poondi, Red Hills, Cholavaram and Chembarambakkam. Authorities are struggling to meet the daily demand of 830  million litres by sourcing water from desalination plants and distant water bodies.

This is not the first time the water-rich South India is grappling with drought. In fact, certain parts of the southern peninsula, such as northern Karnataka, Telangana and the Rayal seema region of Andhra Pradesh, suffer from drought almost every other year. But a 2016 trend analysis of droughts between 1901 and 2004 by researchers from the Purdue University, the US, and the Indian Institute of Technology at Kanpur and Gandhinagar shows that their occurrence and intensity across the region are on the rise since the 1970s. Droughts have particularly become more intense and frequent after 1990, it states. An analysis by Down To Earth shows that the region has faced six severe droughts between 2004 and 2016. The current drought, which started tightening its grip over some parts of the region in 2014, appears to be the worst of all.

But why is a region that benefits from two monsoons a year and receives copious amount of rainfall becoming drought-prone? Historically, if one monsoon failed, the subsequent monsoon came to the rescue of the affected region. But this no longer seems to be the case. Kerala, Andhra Pradesh and Karnataka declared drought in October 2016 soon after the summer monsoon failed to yield the desired rainfall. After the failure of the northeast monsoon, Tamil Nadu joined the list and each of the other states has declared larger areas as drought-affected.

Besides, the increase in frequency of droughts in South India does not match with the performance trends of the northeast monsoon, which accounts for 30-80 per cent of the total rainfall the region receives in a year. A study published in journal Theoretical and Applied Climatology in 2012 shows that winter rains in the peninsular India have increased by 0.4 mm a day per decade between 1979 and 2010.

“Drought is a tricky term,” says S Janakarajan, economist, formerly with the Madras Inst itute of Development Studies, Chennai. While changing rain patterns is becoming a common phenomenon in a warming world, the prevailing drought in South India is not merely a clima tological one. For instance, he explains, Kerala receives more rainfall in a drought year than what Tamil Nadu and Andhra Pradesh receive on a normal monsoon year. Then consider Tamil Nadu. Just six months before the summer rains ditched the state and plunged it into a severe drought, the state had received 52 per cent surplus rainfall. In fact, the 2015 winter rains had caused severe floods in parts of the state, including Chennai that remained inundated for weeks. Where did all the excess water go? “We have not learnt lessons from previous experiences on the need to rethink our uses and demands of water. This drought is one of poor management. Climatic factors are simply exposing it,” he adds.

Consider agriculture. River basins and deltaic regions in South India boast of agricultural traditions that span millennia. But of late, there has been a major shift in their crop and irrigation patterns. The Cauvery delta, for instance, has traditionally been known for paddy cultivation. “But in the past 50 years or so, there has been an increase in the number of cropping cycles a year. People have also shifted from traditional varieties that require less water to high-yielding ones. The shift was partly driven by the state government’s dependence on the Cauvery delta to procure rice for the Public Distribution System,” says S Ranganathan of the Centre for Cauvery Delta Development Studies, a non-profit in Tamil Nadu. Today, irrigation is estimated to consume 93 per cent of the total water available for use in Tamil Nadu; domestic use amounts to just three per cent.

With the advent of tubewells and borewells, irrigation in South India has dramatically shifted from surface water to groundwater. In Karnataka, the number of borewells has increased from 250,000 in 1996 to 850,000 in 2014—an incre ase of 365 per cent. In Andhra Pradesh, the area irrigated by borewells has expanded 10 times in last two decades. According to the Andhra Pradesh Statistical Yearbook, 2014, groundwater is the main source of irrigation for over 80 per cent of the farmland in the state’s drought-prone Anantapur, Chittoor and Cuddapah districts. Such rampant extraction has not only robbed the region of its groundwater but also resulted in serious geological hazards.

In Anantapur’s Goddumarri village, people have drilled over 40 borewells on a 405 sq m community land, next to a temple. This is causing the dry riverbed of the Chritravati, barely 500 metres from the temple, to cave in at places. In 2014, the district groundwater officials imposed a ban on new borewells after a 9 m wide, 4.5 m deep sinkhole was formed on the riverbed. “But farmers don’t ask for permission before installing borewells, and officials don’t stop them fearing suicides,” says a former Goddumarri sarpanch who does not wish to be named. In January 2017, Goddumarri residents spotted another large sinkhole on the riverbed. A third large sinkhole and several small sinkholes have appeared in the area since. “The nature of the cavernous limestone structures underlying the riverbed is to collapse when they turn brittle. Droughts coupled with groundwater exploitation seem to have accelerated the process,” explains P Purushottam Reddy, deputy director of the Groundwater Department of Anantapur.

Watershed and farming expert L C Nagaraj blames the prevailing drought on the lack of a crop pattern policy for areas dependent on groundwater. In Karnataka, for instance, the endemic biodiversity in interior agriculture zones is systematically under attack from monoculture plantations of trees like eucalyptus.

Somanna, a farmer from Melkote village in Karnataka’s Dodballapur district who owns a borewell, says eucalyptus is a fast growing pulpwood. With good water supply, they can be harvested two years after planting. Many farmers in the region have fallen to the temptation and are replacing agricultural crops with eucalyptus. This is a dangerous trend because the species is a known water-guzzler and does not allow any other plants to grow in its vicinity. A study by Benagluru-based non-profit Ashoka Trust for Research in Ecology and the Environment (ATREE), finds that eucalyptus plantations across the Nandi Hills are a major reason for the declining water level in the Arkavathy river, which originates in the hills.

While rising interest in commercial and intensive farming has put a question mark over the fate of groundwater resources, aggressive industrial policy and practice have reduced dependability on surface water. Andhra Pradesh, Karnataka, Tamil Nadu and Kerala top the list of states with high surface water potential. Together, they boast of over 30,000 km of riverine and canal systems and about 2.8 million ha of standing surface water. But there is ample evidence to show that these are on the decline.

According to a report by the Indian Institute of Science in Bengaluru, all the 44 rivers in Kerala are highly polluted by domestic, agricul tural and industrial waste. There are no effective water treatment facilities in any highly polluting zones. Last year, the Central Pollution Control Board declared all the 15 rivers in Karnataka “highly polluted” and “unfit for human consu mption” after it found that untreated sewage and waste from commercial activities were being directly dumped into the rivers. 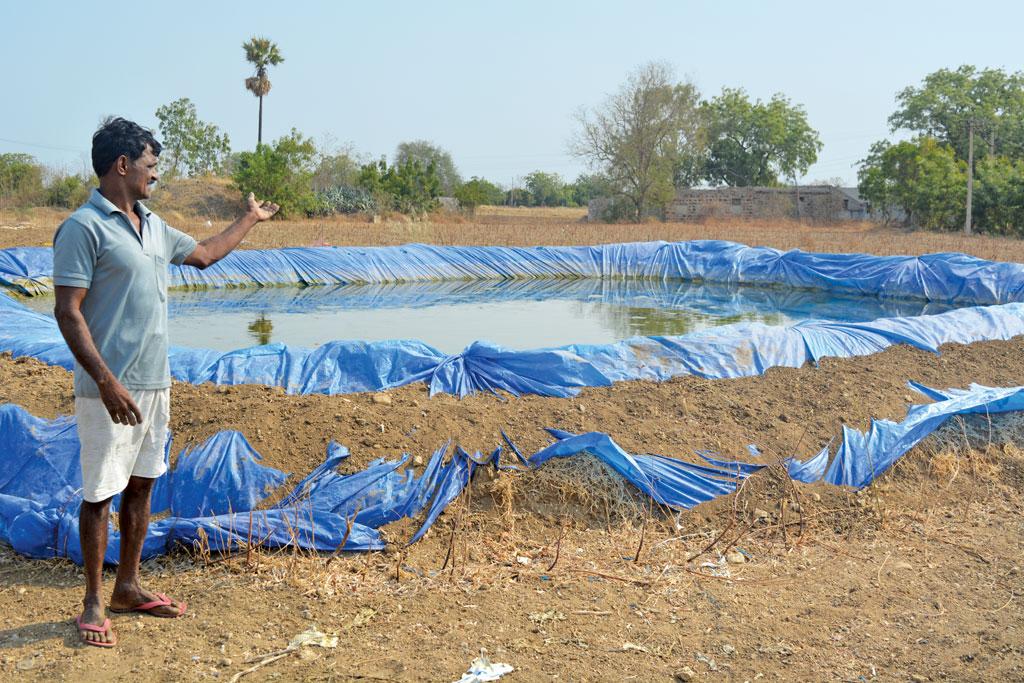 Yet, governments do not seem to get the message of resource management. To attract investments, Andhra Pradesh and Telangana have recently assured 10 per cent of the water available for use to industries. Last summer, Andhra Pradesh diverted up to 60 TMC ft of water from its reservoirs to the Krishna to facilitate the Krishna Pushkarelu festival held in August that year. The entire state plunged into a severe water crisis when the summer rains did not sustain.

While there is no dearth of straws dipping into the common pool, recharge has had few takers. Nagaraj says at least 33 per cent of forest cover is essential for a sustained hydrological cycle. But satellite surveys show that between 1987 and 2013, tree cover in Karnataka, Andhra Pradesh and Tamil Nadu has shrunk by about 20 per cent. Loss of tree cover means very little rain- water percolates into the ground. Data available with the state governments show that the groundwater table in Tamil Nadu has lowered by 4.1 metres in the past six decades.

Yet, there is next to no evidence of imple mentation or enforcement of these laws by any state other than Tamil Nadu. Even in Tamil Nadu, where groundwater levels have mostly remained stable in a few areas because of rainwater harvesting regulations, there have been reports of lack of maintenance, monitoring and improper installation of the structures. Data on the website too remains to be updated.

Another, rather contrasting, example of mismanagement is the blind chase to achieve targets for construction of farm ponds, a rural rainwater harvesting structure. Karnataka and Andhra Pradesh account for over 40 per cent of the farm ponds constructed in the country in 2016-17. But the quality and method were called into question as the ponds reportedly failed to withstand even a single spell of rain.

South India’s transition from a water-surplus region to a drought-prone region coincides with the decline of its traditional system of water harvesting and irrigation. While groundwater use in agriculture has increased from 600,000 ha in 1960 to 1.6 million ha in 2013 in the five states, irrigation by tanks has more than halved from 936,000 ha to just 377,000 ha during the period, according the Union Ministry of Agriculture. In Andhra Pradesh and Karnataka, where the practice of using communal tanks for irrigation was popular, dependency fell from around 40 per cent to 15 and 10 per cent respectively. The change in irrigation practices has led to the mismanagement of community and temple tanks, which are abundant in South India and have traditionally served as rainwater harvesting structure.

S H Gopal Krishna, a technocrat in Karnataka who is developing a sensor-based equipment to detect moisture in the soil and release water accordingly, notes, “During my childhood days the kere (traditional small tanks) used to be so well maintained. Today they remain filled with bushes and filth.”

Some of these traditional tanks, dating back to 2,000 years, continue to provide irrigation water even now. And they hold the secret to how South India had remained largely drought-proof all these years.

The drought in South India may be historic but that does not make it any less ominous.

The indications are clear, extreme climatic variations are here to stay. It’s time governments got their priorities straight—sustainability or chronic scarcity?