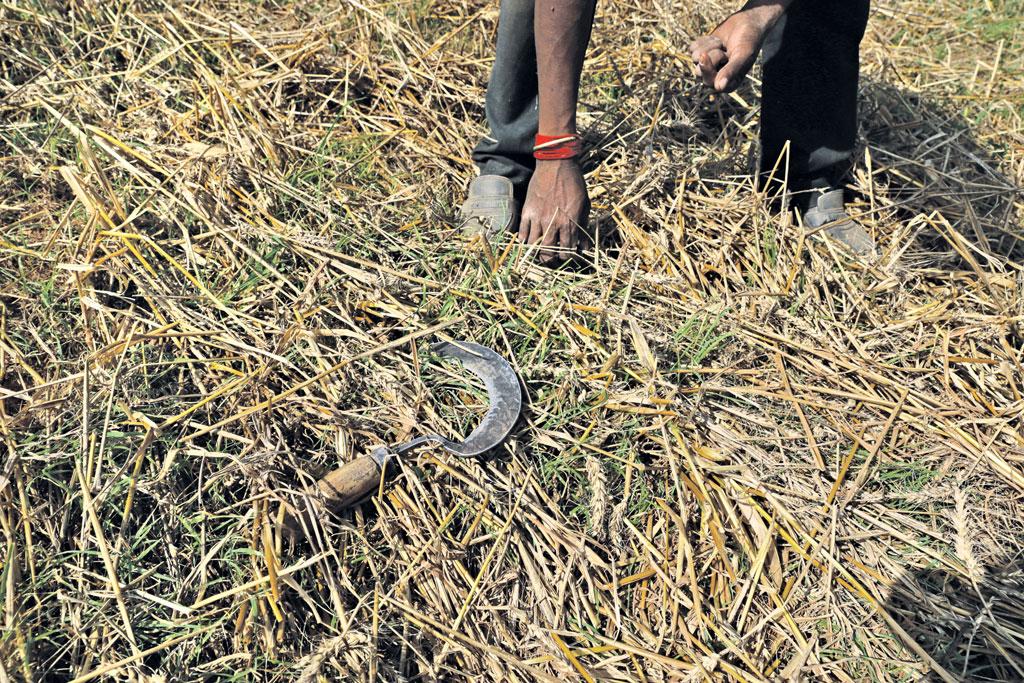 When the National Democratic Alliance (NDA) government came to power in 2014, it announced a number of schemes to assist farmers and increase crop production. In 2016 Prime Minister Narendra Modi made a grand promise of doubling farmers’ income by 2022. While some schemes were new, others were restructured for effective outcomes. But things are only going from bad to worse for millions of farmers affected by crashing commodity prices, debt and climate change.

These farm schemes have hardly made a difference to a majority of farmers. Consider this: the value of agriculture output today is below 5 per cent; it was 14 per cent for nearly a decade before 2014. During the Green Revolution, agriculture accounted for 40 per cent of India’s GDP, now it is a just about 13 per cent. “Farm schemes are never meant for structural changes in agriculture. They are meant for specific target groups who face disadvantages in some way,” says Pravesh Sharma, a retired civil servant.

“Till now, there has not been a comprehensive policy when it comes to agriculture. Increasing farm produce is one thing, making it profitable is quite another,” says Shyam Khadka, India representative for the Food and Agriculture Organization. So what are the problems that plague the schemes launched by the NDA government? Here’s a brief analysis.

Launched in 2015 with an outlay of Rs 50,000 crore, the scheme aims to improve irrigation coverage. The Pradhan Mantri Krishi Sinchayee Yojana (PMKSY) has four components: Accelerated Irrigation Benefits Programme (AIBP), Har Khet Ko Pani, Per Drop More Crop and Watershed Development. According to a 2017 NITI Aayog report, out of 149 major and medium irrigation projects under AIBP, 99 were given priority for implementation, covering 7.6 million hectares under irrigation. Out of these, 23 were shortlisted for completion by March 31, 2017. But no project has been completed so far, says a senior government official. Also, no project has been sanctioned under the Integrated Water Management Programme.

Though experts says it is not easy to increase irrigation coverage during drought years, these schemes have, indeed, not helped farmers drought-proof their ecosystems. Though the government fared well in micro irrigation (Per Drop More Crop) in 2016-17, it is way below the target to cover 1.2 million hectares (ha) for 2017-18—only 0.044 million ha have been covered so far. “The fundamental problem is that we are working on the supply side, but not managing water properly. Farmers should be taught on how to do water management,” adds Khadka.

The scheme aims to bring 50 million farmers under insurance cover at a total annual budgetary allocation of Rs 5,500 crore. The government also launched the restructured weather-based crop insurance scheme to help farmers tide over crop loss. These schemes, which plan to cover 50 per cent of the country’s cropped area by 2019, already cover 30 per cent of the cropped area and have been implemented in 21 states.

But farmers are finding it difficult to get the insured amount for crop loss. Take for instance the weather-based crop insurance scheme. Out of the rougly Rs 82,354 lakh claims made in 2016-17, only Rs 20,936 lakh was paid, according to the credit division of the agricultural ministry. It is not surprising why this is happening. Going against popular opinion, the govermnet co-opted private insurance companies, even though public service banks were ready to join the scheme. G V Ramanjaneyulu, executive director, Centre for Sustainable Agriculture, Hyderabad, says that when claims are high, private insurance companies refuse to pay farmers. “In some cases, state governments too did not release their share of the insured amount,” he says. “Moreover, insurance companies do not have a wide rural distribution network, so the settlement mechanism does not happen,” says Sathya Raghu, co-founder of Kheti, which works with farmers’ groups in Telangana.

The Soil Health Card Scheme was launched in February 2015. The target was to issue 140 million cards to farmers over the next three years. As of March 21, 2017, the agriculture ministry had issued just 58.2 million cards. But forget about meeting targets, the very purpose of issuing soil cards is not being met. “Even for those who have got soil health cards, nothing has changed. The government is not sensitising farmers on what to do after the soil test,” says Raghu. Even soil sample collection is not happening properly. “Those collecting the samples do not follow a proper method. They simply collect the soil samples from anywhere and send it for testing,” says Vijay Pandey of Gorakhpur Environmental Action Group, a non-profit based in eastern Uttar Pradesh.

The Price Stabilisation Fund (PSF) was approved in 2015 with a corpus of Rs 500 crore. This was done to regulate price volatility of onions and potatoes. Pulses were later added to the list. PSF also aims to promote direct purchase from farmers and protect consumers by supplying commodities at reasonable prices. Experts say the basic intent is price stabilisation for consumers and not farmers. As a result, most of the funds have been spent on creating a buffer stock for these commodities. Agriculture expert Raghav Raghunathan says that government subsidy keeps prices “depressed”, but when prices go up, the stockists and traders make money. For instance, when chana prices went up from Rs 3,000 to Rs 12,000 do you think any farmer sold at Rs 12,000? Only retailers sold at that price, he adds.

Little efforts have been made or funds allocated to create warehouses or godowns linked with village economies that would have protected farmers against price volatility. Little wonder then that farmers across India are throwing away these commodies after a bumper harvest due to crashing prices. Experts say that the Reserve Bank of India’s inflation policy is tilted towards urban consumers. It is keeping the food inflation in check at the cost of the farmer. “A delicate balancing act is needed. The policy should ensure that the poor farmer does not suffer,” says Kanhaiya Singh of the National Council of Applied Economic Research, New Delhi.

The Rashtriya Gokul Mission’s aim is to conserve and develop indigenous breeds under the National Programme for Bovine Breeding and Dairy Development. The government sanctioned Rs 150 crore for setting up 15 gokul grams (cattle centres) across the country in 2014. At these cattle centres, the state livestock department is expected to improve the stock and productivity of indigenous cattle breeds, whose population has been rapidly decreasing. Between 2007 and 2012, their number declined by 9 per cent, while exotic breeds increased by 20 per cent, shows an analysis of livestock census by Down To Earth.

But not a single cattle centre has been completed or opened so far. Several states have shown scant interest in the programme citing non-availability of land. Worse, two BJP-ruled states, Goa and Rajasthan, have refused to implement the programme. Though 10 states have agreed to set up the centres, they are yet to make substantial progress saying that they lack funds and resources. It is ironic that the government is overzealous in protecting cows on one hand, but is unable to create cattle centres on the other.