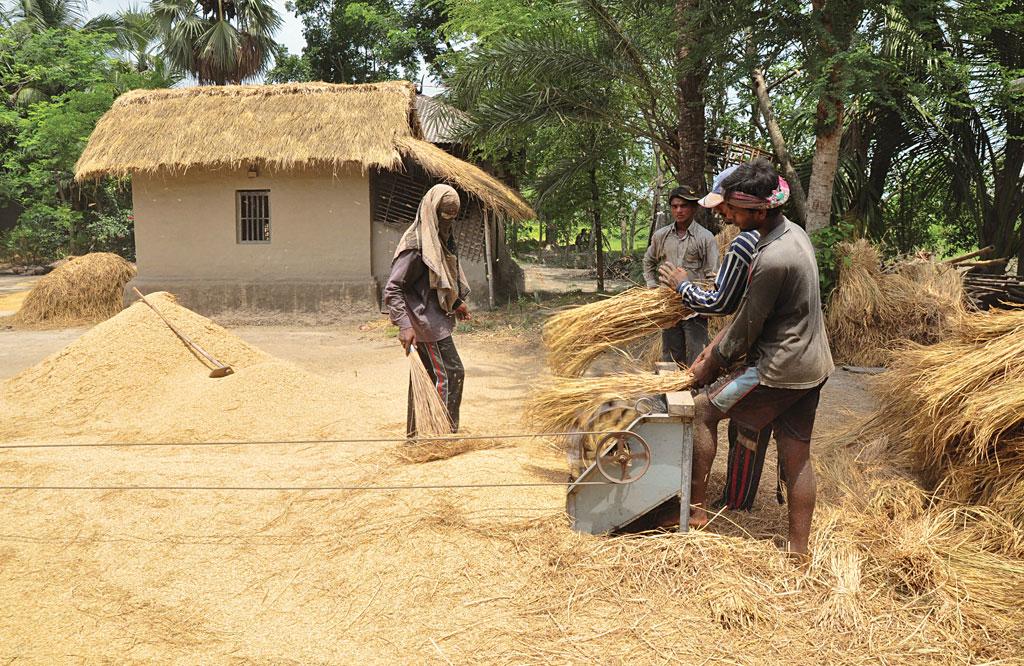 Threshing of paddy in a village in Bangladesh (Source: Creativecommons)

When the eldest daughter of Rubina Begum asked for her tuition fees, Rubina was in a quandary. She and her husband work as agriculture labourers in Darjji Para village in Bangladesh’s Rangpur division. But it was August and the sowing period of paddy was over. They had little money left to pull through the lean season that continues till harvesting begins in November. Rubina approached the paddy bank in her village, where she is a member, and borrowed one mann (40 kg) of paddy. She paid the tuition fees by selling the paddy, and saved the extra money to tide over the lean season.

Paddy banks have emerged as a sustainable survival solution for poor communities in Bangladesh who face seasonal food insecurity due to a variety of reasons. These paddy banks are a social innovation of Rangpur Dinajpur Rural Service (RDRS), a non-profit in Rangpur. It all began in 2006, when the idea was propagated by an independent research group from Jahangir Nagar Uni-versity in Nilphamari district. Bangladeshis living abroad helped finance the initiative. Today, RDRS has set up more than 350 paddy banks in the country benefitting thousands of poor farmers and ensuring their food security. There is no restriction on the number of members a paddy bank can enrol. Between 35 and 40 families are members of each paddy bank.

This was not the case earlier, says Malti Rani from Sipaipada village of the same division. During lean seasons, the poor would be dependent on loans from moneylenders, who used to charge exorbitant interest rates. If farmers failed to pay, they were harassed and forced to work as bonded labourers. Says Rani, “Before the creation of paddy banks, we were often indebted to multiple creditors to manage our crisis. If we failed to repay the loan because of illness or some other reasons, we entered into a debt cycle.”

People can also start and operate such paddy banks with their own savings. Vulnerable households in the community can form a group to establish and create a paddy bank in their community. At least 25 vulnerable families are needed to create the paddy bank of 1-2 tonnes. The members then form an executive committee of two to three persons, who take care of the day-to-day functioning of the bank. The committee then selects the place of storage, which could be at one of the member’s house. The cost of storage is shared by all the members.

The executive committee also decides the time when people can borrow rice and when they will return. It has been seen that generally people borrow rice twice every year—in March and in September. They return it subsequently after the harvesting season in June and November. 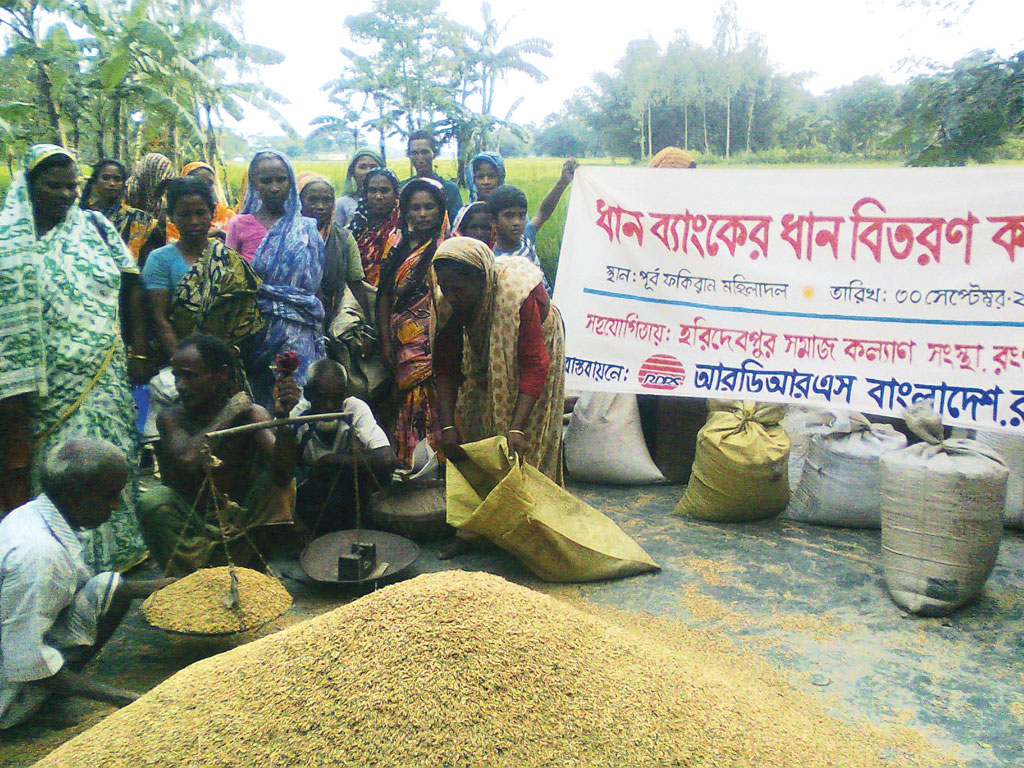 The members are supposed to return 5 kg more paddy than what they have borrowed. A record of distribution and collection of paddy is maintained, and if anything goes wrong, the federation takes over the management. RDRS gets involved only when the federation fails to mitigate the problem.

The paddy bank is conceptualised in such a way that it motivates poor farmers to deposit paddy in the bank soon after the harvesting period. This creates the capital for the bank. “It is common for the very poor to sell their assets, borrow from moneylenders at high interest rates or even borrow paddy from rich people with a promise to return double the amount borrowed within the next harvesting period,” says Mamunur Rashid of RDRS.

Normally, people do not have storage capacities and they sell the rice at a cheaper rate. Due to lack of employment opportunities during the off-season, they are unable to buy rice. For these ultra-poor families, lack of rice is the difference between living and starving. However, the Bangladesh government is yet to acknowledge the initiative as a success, though officials have often praised RDRS at many occasions.

Paddy banks are also popular in countries such as Combodia and in a few states of India, says Rashid. According to a study by the Cambodian Center for Study and Development in Agriculture, at least 3,000 such paddy banks were operational in Combodia in 2011. In West Bengal, the Development Research Communications and Services Centre, a non-profit has set up grain banks across the state.

“Rice is the staple food for the rural poor. Their life becomes extremely vulnerable even with a slight change in the weather pattern or during extreme events,” says M G Neogi, who is with the World Bank. He adds that the Bangladesh government should consider paddy banks as a solution for sustainable agriculture, as it does not need continuous investment and survives sustainably on the initial investment. The initiative shows that even vulnerable communities can engineer a life-saving solution in the event of a crisis.