At least 5,772 incidents of stubble fire have been registered in Punjab till October 22 alone 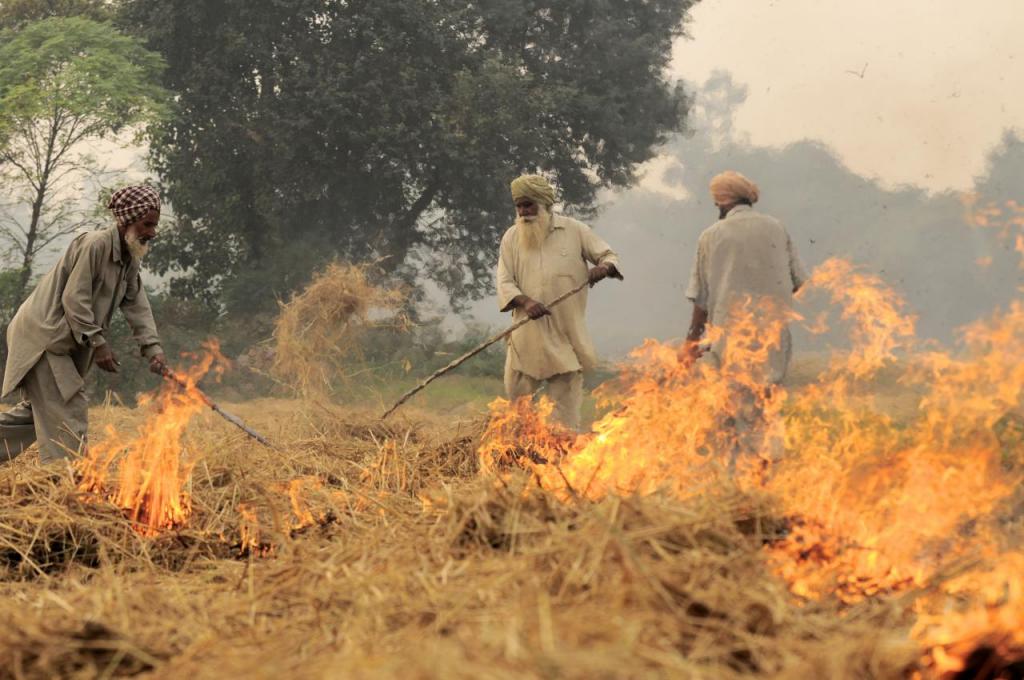 Strong winds have scorched stubble fires in the villages of Punjab: Smoke has begun to enter houses, making it difficult for villagers to breathe.

The state has registered a spike in stubble fires as farmers have harvested paddy and begun sowing wheat.

At the same time, due to an early onset of winter, farmers began preparing the fields to sow wheat, as part of which they started burning the stubble in their fields.

Down to Earth saw several fields on fire in Parasaul village in Punjab’s Tarn Taran district.

Balendra Singh (64), a farmer, said: “What do we do if not set the stubble on fire? Paddy cannot be bundled or sold anywhere. About 24-25 quintals of stubble is released in one acre; so farmers cannot keep it in the house.”

Singh refuted the state government’s claims that Happy Seeder and Super Seeder machines were provided to marginal, small and medium farmers to prevent them from burning stubble. No such machine has reached him so far, he said. Only big farmers have been given such machines, he added.

Satellite images from the United States space agency National Aeronautics and Space Administration also testified that as the paddy harvesting season began, the first incidents of stubble burning were recorded in Amritsar, Tarn-Taran, Kaithal and Karnal.

The incidents of stubble burning in Haryana and Punjab continued to fluctuate through the years, according to the Visible Infrared Imaging Radiometer Suite (VIIRS) data. Punjab witnessed the highest number of fire incidents in 2016 (15,377 incidents). It recorded 10,621 such incidents in 2017.

The incidences of farm fires have been estimated to be fewer as the area under paddy cultivation came down in 2021. Haryana and Uttar Pradesh have sown 7.7 per cent less paddy than they did in 2020, according to according to the Commission for Air Quality Management (CAQM), Punjab.

There has also been a reduction of 12.4 per cent in stubble from non-basmati rice varieties.

The amount of short-duration varieties of paddy that has been harvested and whose stubble will be set on fire, however, may increase between November 4 and 10. Farmers may set fire to stubble after harvesting the long-duration paddy varieties.

At least 5,772 incidents of stubble fire have been registered in Punjab till October 22 alone, according to the VIIRS data.

In such a situation, with the increasing incidence of fire in long-duration paddy varieties, the air pollution problems of Delhi-NCR may also increase in the coming times.

With assembly elections approaching in Uttar Pradesh and Punjab, farmers are angry on the government’s laxity in preventing stubble burning.

Gurubachan Singh, a farmer in Chibba village in Amritsar, told DTE he planted more Basmati (variety 1509) this time. He said: “Diesel costs more than Rs 100 a litre. How much oil (fuel) will the farmer burn to remove the stubble from the fields?

Farmers who are producing the third crop have been adopting early varieties of paddy, according to Narinder Pal from Farmers Science Center, Amritsar.

Such varieties of paddy get ready early, so farmers sow them late and later set the stubble on fire.

Raspal Singh, a farmer from Moga, said he planted three-four paddy varieties in his fields of 55 acres. He planted Pusa-44 (long-duration variety) variety in 2020, and replaced it with PR-126 (short-duration variety) and Basmati 1509 in 35 acres.

Singh pointed out that stubble has to be burned earlier if potatoes and peas are to be cultivated. He added he will sow mustard as the third crop as it fetches good price in the market.