Stubble burning amid rising fodder prices: Why the paradox 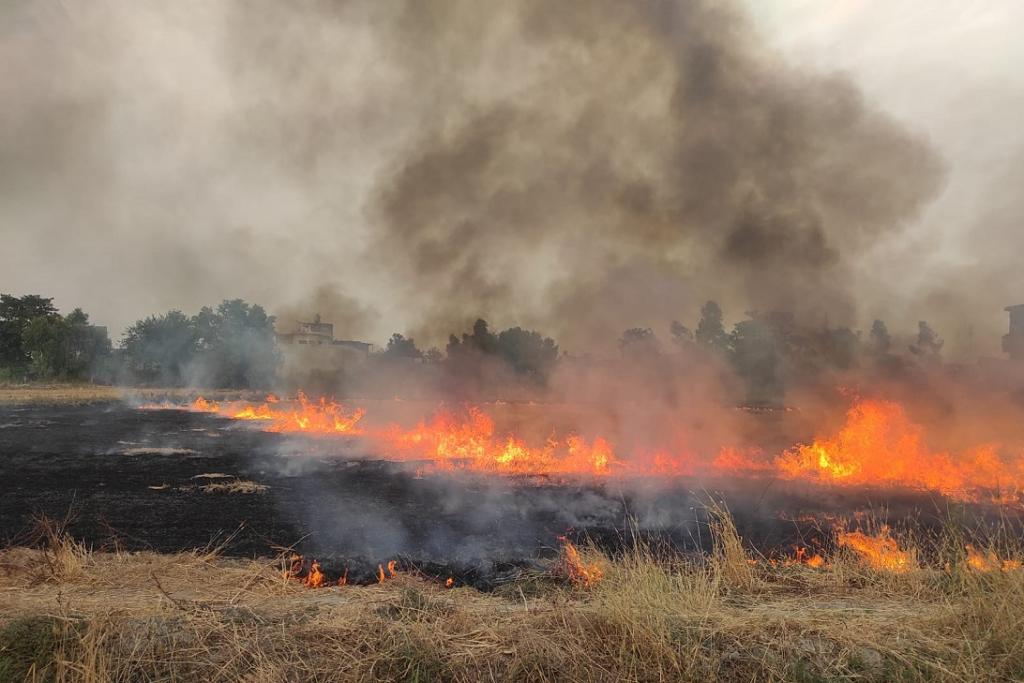 A field of wheat stubble in flames in Punjab. Photo: Dimple Behal

A strange paradox emerged in the primary economic sector in India recently: A section of farmers, especially in Punjab, burnt the residue after harvesting their wheat even as fodder prices shot up.

Wheat yield has been relatively low this year, anyway, and the stubble could have supplemented farmers’ income. Yet, they decided to set their fields on fire. Why?

Several farmers told Down To Earth that they took to burning stubble as they were in a hurry — the state had set June 10 as the date to sow paddy.

Fodder in Punjab is known as ‘tudi’ and is made from wheat stubble. The tudi rate in the state was Rs 950-Rs 1,100 per quintal before the wheat harvest in April. This changed to Rs 400-Rs 800 per quintal in different parts of the state after the harvest.

Farmers burnt wheat stubble despite these high prices. The Punjab Remote Sensing Centre, Ludhiana, recorded 11,650 cases of stubble burning till May 29 this year, against 11,468 last year.

Dyant Singh, a 46 year-old farmer from Kathar village in Jalandhar district, told this writer that burning the wheat stubble was the easiest way to get rid of it. He was in a hurry to do so since the Punjab government had declared June 10 as the date to sow paddy.

“Other processes such as flooding the field to make the stubble softer and then ploughing it, is time-consuming. Either you waste a lot of water or contaminate a little air. It’s a trade-off that we have to make,” Singh said.

The date for planting paddy has been brought forward to conserve water in Punjab. The window between the harvesting of wheat and sowing of paddy shrank with the enactment of the Punjab Preservation of Subsoil Water Act, 2009.

The Act suggests that for conserving groundwater, transplanting of paddy has to be done by June 10, when the most severe phase of evapo-transpiration is over.

Another reason for farmers burning wheat stubble in Punjab is the size of land holdings. The average land holding in the state is 3.62 hectares (ha), according to government data.

Increasingly, marginal, small and medium land holders, owning less than four ha of land are either selling out or mostly renting their farms to large farmers who can afford capital-intensive agriculture including costly machines.

A farmer generally gets two trollies of fodder — approximately 16-17 quintals — per acre. For getting the same fodder, a farmer has to pay Rs 1,200 per trolley to the fodder maker, who uses his machinery and tractor to convert stubble into fodder.

The farmer can earn around Rs 13,600-14,600 from an acre of the farm after paying the fodder maker. Those small holding farmers who can’t afford to sell / rent their land, have found that an easy alternative for managing the crop stubble is to burn it. Hence, the fires.

The Punjab government has, nevertheless distributed 76,622 machines to farmers and custom hiring centres on a subsidy of Rs 1,000 crore from the Union government since 2018.

These machines only do well in extracting the stalk, but not the upper part of the roots which are left untouched. The government has also started giving farmers Rs 1,500 as an incentive for not burning the leftover stubble for a farm of one kanal or 0.05 hectares.

However, there were small and medium farmers who told this writer that they found no reason to burn the stubble. Rather, they ploughed it, which proved advantageous.

Purushottam, a farmer with a medium-sized farm, also in Kathar, said, “I have been doing this for the past decade. I have seen good changes in the farm. Although, it is very easy to burn stubble, it harms the top soil, which hard like a brick. Try walking over that patch.”

He also found it strange that farmers who did not abide by the government’s laws regarding not burning stubble, adhered to rules about sowing paddy quickly.

“I have ample time to sow paddy. Also, ploughing the farm frequently after harvesting wheat makes the soil very suitable for paddy and also doesn’t pollute the air. I have also seen the amount of fertiliser reduce in the soil in the last decade,” Purushottam said.