Sugarcane farmers caught in a maze of brotherhood of brokers

Millions of sugarcane farmers have been protesting across India. This is a protest march in New Delhi. (Photo: Amarjeet Kumar Singh)

Radhakrishna Vikhe Patil from Maharashtra is a veteran Congress leader and a former minister, whose father, Balasaheb Vikhe Patil, too was a Congressman and minister. When Radhakrishna’s son, Sujay Vikhe Patil, left the Congress party and joined the ruling Bharatiya Janata Party (BJP) on March 12 this year — to contest the Lok Sabha elections on a BJP ticket from the Ahmednagar constituency — Radhakrishna continued to campaign for his son even as he held the post of Leader of Opposition in the Maharashtra assembly. He is still with the Congress.

Radhakrishna is one of the directors of Vitthal Vikhe-Patil Cooperative Sugar Factory, a cooperative based in Ahmednagar. His son, Sujay, is chairperson of this factory. His factory owes Rs 68 crore to farmers in fair remunerative price (FRP) arrears this season. The Vikhe Patil family is a formidable name in Maharashtra’s political history and sugarcane politics. Its family’s influence on sugarcane farmers in Ahmednagar district — that sends two Lok Sabha members and 12 assembly representatives — is undisputed. There are around 100,000 farmers associated with these factories and thousands of other employees who are a captive vote bank for this ruling family.

Controlling a cooperative not only enables politicians to capture a captive vote bank, but it also gives them access to finance. Validated research shows how politicians use cooperative sugar factories to divert funds, including loan money, for elections as well as to start other businesses. “Cane price falls by approximately Rs 20 in politically controlled mills during election years. These drops translate to an economically significant drop in revenues of Rs 6 million per election year per mill. Evidence suggests that the profit decline is not due to effects on mill operations, but rather due to appropriation of funds for electoral purposes,” says Sandip Sukhtankar, associate professor at the University of Virginia, USA.

“Persistence of the maze of regulations instituted five decades ago, despite its stated rationale being thwarted, suggests that it is maintained by entrenched vested interests,” says Mala Lalvani, professor at the University of Mumbai.

This nexus is well entrenched. Take for instance Radhakrishna Vikhe Patil, who in 2017 managed to get a cheap loan of Rs 35 crore from the Mumbai District Central Cooperative Bank or Mumbai Bank for his sugarcane factory. He is incidentally one of the directors in this bank. The chairperson of this cooperative bank is Pravin Darekar, a BJP legislator, who sanctioned the loan despite protest from other directors.

According to Swabhimani Shetkari Sanghtan (SSS), a sugarcane farmers’ union, of the 180-odd defaulting sugar factories in Maharashtra, 77 are owned by BJP leaders, 53 by NCP leaders, 43 by Congress members and the rest belong to Shiv Sena leaders.

“FRP arrears of these mills in Maharashtra amount to a staggering Rs 5,000 crore,” says Raju Shetty of SSS. “When in government, parties sanction financial assistance from cooperative banks or announce sops for their mills,” says H M Desarda, an economist based in Aurangabad.

That’s why sugar barons in Maharashtra have switched political loyalties in every election just to stay in power. Vijaysinh MohitePatil, who was earlier with NCP shifted to BJP in 2014. Vijaysinh is a sugar baron from Solapur and one of the biggest defaulters. He recently shared dais with Prime Minister Narendra Modi. His company, Maharshi Shankarrao Mohite-Patil Co-operative Sugar Factory in Solapur district, has a loan default of Rs 400 crore.

There is always an intense competition between political parties to occupy posts in a cooperative—each cooperative must have a mandatory of 22 directors. Industry watchers allege Sharad Pawar and his party leaders directly or indirectly control the functioning of about 187 sugar factories. Since each factory has network of farmers, it gives these politicians access to captive vote banks. “If NCP survived after splitting from the Congress in 1999, it is only because of their massive presence in sugar industries in western Maharashtra,” says Desarda.

The involvement of politicians has led to the mismanagement of sugar mills. Between 2008 and 2014, 39 cooperative mills in the state were sold at a throwaway price. Most of the buyers were NCP, Congress and BJP leaders, who had a direct or indirect link with the acquiring companies. As a result, farmers have no voice in these private firms.

“It was broad daylight scam of Rs 10,000 crore,” says Yogesh Pande, a lawyer who is arguing against this sale in the Bombay High Court, where a petition has been filed by Raju Shetty and Anna Hazare. “Who do farmers turn to for justice when the ruling party leaders are the biggest defaulters? State Cooperation Minister Subhash Deshmukh’s sugar factory has pending FRP arrears of Rs 104 crore, while Rural Development Minister Pankaja Munde’s factory has Rs 64 crore in FRP arrears,” says Shetty.

Sugar is the backbone of Uttar Pradesh’s economy, engaging about 25 million sugarcane farmers. But unlike Maharashtra, most sugar mills are owned by private companies — 95 of the 119 functioning mills. Sugar barons here have enjoyed political proximity with all ruling political parties. They are known to fund all parties, and in return receive all kinds of sops.

Here’s how it works. There is a government-supported sugarcane society in all 44 sugar-producing districts that act as a bridge between sugar mills and farmers. In 1993, when the Samajwadi Party (SP) government came to power, it reduced the society management tax from 5 per cent to 2.75 per cent to help the sugar industry. This forced many societies to close down as they were unable to pay their staff. Again in 2012, when SP returned to power, Chief Minister Akhilesh Yadav further reduced the tax.

Once a society is closed, it gives a free hand to private sugar mills to bargain directly with farmers for lower procurement price of sugarcane as well as to delay payments. What is shocking is that even after the Allahabad High Court ordered the Uttar Pradesh government in 2017 to pay sugarcane farmers, the government favoured the industry and waived off the interest on arrears.

In fact, political heavyweights such as Mulayam Singh Yadav and Mayawati kept the sugarcane portfolio with them-selves when in power. In 2010, the Bahujan Samaj Party government led by Mayawati sold 21 of the mills owned by the government’s State Sugar Corporation. The Ponty Chaddha Group bought five sugar mills at a throwaway price. A 2012 Comptroller And Auditor General report found that profit-making government-run sugar cooperatives were sold below the market price. On April 26 this year, the Central Bureau of Investigation filed a FIR against Mayawati for corruption in the disinvestment of government-owned sugar mills. 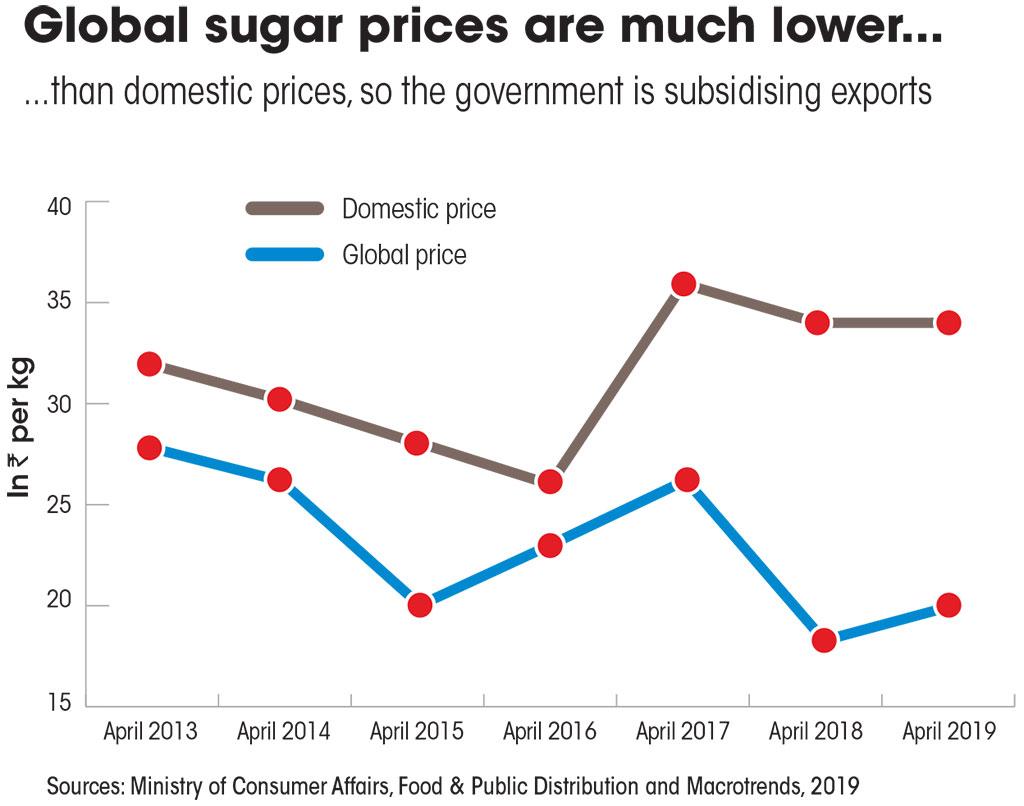