India has most number of organic cultivators but only 1.1% of acreage

Organic farming may not be mainstream yet, but it has rapidly grown in stature in the last two decades, according to a new survey. There has been a more than five-fold increase in the acreage of land under organic cultivation since the turn of the millenium.

India was among the top 10 countries with 1.94 million hectares (mha) under organic cultivation in 2018, according to the survey by Switzerland-based Research Institute of Organic Agriculture (FiBL) and Germany-based International Federation of Organic Agriculture Movements — Organics International (IFOAM). Australia topped the list with 35.69 mha.

At more than a million, the country also had the most number of organic farmers — over a third of the nearly 2.8 million across the world.

Countries with the most area under organic agriculture in 2018 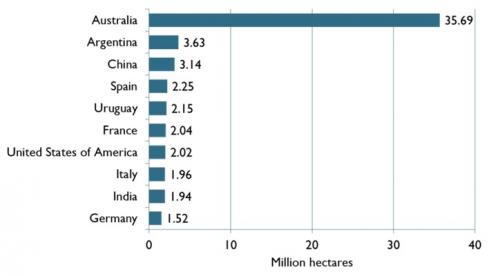 A production system that sustains the health of soils, ecosystems and people. It relies on ecological processes, biodiversity and cycles adapted to local conditions, rather than the use of inputs with adverse effects. Organic agriculture combines tradition, innovation and science to benefit the shared environment and promote fair relationships and a good quality of life for all involved.

The IFOAM survey on standards and legislation found 84 countries had standards regarding organic farming by 2019, and 17 more were in the process of drafting legislation. 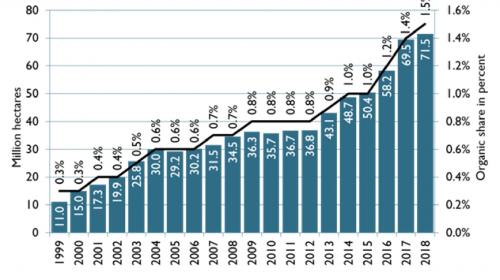 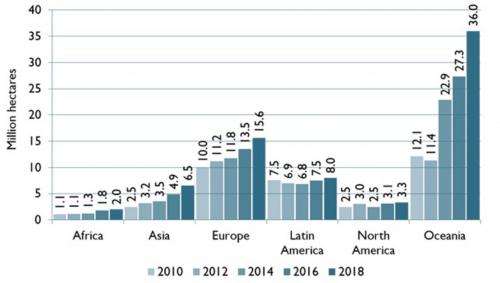 The agency estimated organic food and drink sales at more than 95 billion euros in 2018, with the United States the single-largest market (42 per cent share), followed by the European Union (38.5 per cent) and China (8.3 per cent).

The highest market share of organic produce within a country was in Denmark: At 11.5 per cent, it was the first country to cross the 10 percentage mark, followed by Switzerland (9.9 per cent) and Sweden (9.6 per cent).

Organic farming was native to India. Indian farmers, in the past, practiced nature-friendly farming but after the Green Revolution, they started using agro-chemicals exceesively. High-input intensive agriculture harmed the environment, humans and animals.

The current agrarian crisis, agro-biodiversity loss, natural resource degradation and changing climate have aggravated the situation, raising questions on sustainability of this kind of agriculture.

The central and state governments need to make a a paradigm shift and create an ecosystem for farmers to support organic and natural farming. This can help achieving several of the United Nations-mandated sustainable development goals by helping with food and nutrition security, tackling climate change, rural development, employment generation, increasing farm income, conserving natural resource, improving biodiversity and health.