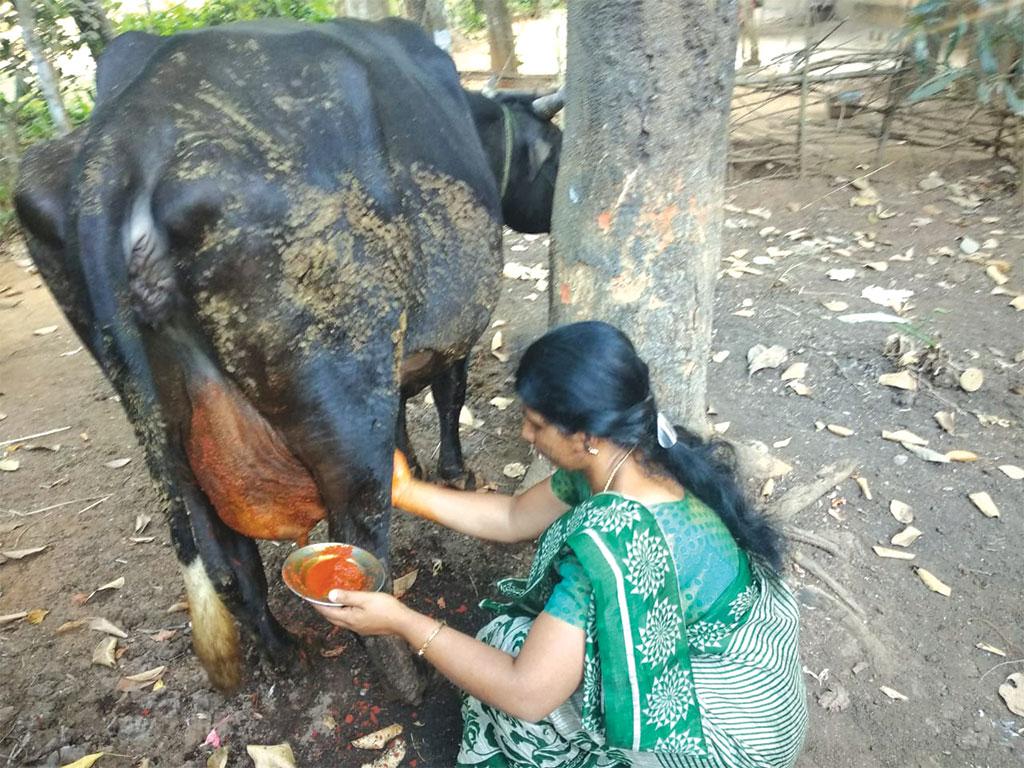 Mastitis can be debilitating both for dairy cattle and their farmers. This bacterial infection, triggered by injuries caused due to rough milking or because of unhygienic farm conditions, causes inflammation of the udder tissue and blockage of milk ducts.

This causes excruciating pain to the animal and affects milk yield and quality. Left unmanaged, the disease can spread to uninfected animals in the herd and result in their death. A July 2020 study published in BioMed Central says 70 per cent of all losses incurred by dairy herds in India are due to mastitis.

Now call it the lack of enough field veterinarians in the country, over-the-counter access to antibiotics or the fear of losing milk and, therefore, income, most dairy farmers rush to administer high doses of antibiotics to the cattle even at the slightest sign of mastitis.

It found that more often than not, dairy farmers do not consult veterinarians and indiscriminately use antibiotics that are crucial for treating infections in humans.

Even the Farmers Manual by the Department of Animal Husbandry and Dairying (DAHD) recommends using these three antibiotics for treating mastitis. Worse, most dairy farmers skip the critical withdrawal period — a prescribed period during which treated animals should be excluded from the milk supply chain to allow antibiotic residues to fall to the required level.

In 2018, when the Food Safety and Standards Authority of India (FSSAI) tested milk samples from organised and unorganised sectors across the country, it found antibiotic residues beyond permissible limits.

Analysts fear that such misuse of CIAs and HPCIAs could be driving the burden of anti-microbial resistance (AMR), already a pressing concern worldwide; at least 10 million people are likely to die of AMR every year by 2050, says WHO.

To understand the reasons for such misuse or overuse of antibiotics in dairy sector, CSE recently organised a national-level consultation with experts from sectors, including animal husbandry, food safety, human health and pollution control departments, and with representatives from dairy federati ons.

Experts said that ethnoveterinary medicine — herbal preparations that have evolved over thousands of years through innovations and experiences of communities — could be a probable solution to bring down the misuse of antibiotics. 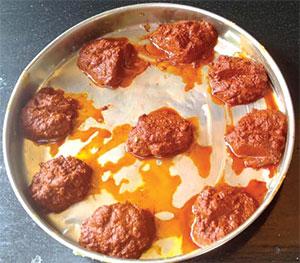 Such formulations are already being developed and promoted by the National Dairy Development Board (NDDB). It recommends using a paste prepared by mixing aloe vera, turmeric, lime (calcium hyd roxide) and mustard oil.

It can be applied on the affected area thrice daily, for three to five days, along with feeding whole lemons to the cattle. In case of chronic mastitis, when there is blood in milk, a paste of curry leaves and jaggery is also fed to the cattle.

To assess efficacy of the formulation, NDDB conducted a study in collaboration with the University of Trans-Disciplinary Health Sciences and Technology (TDU), Bengaluru, and Sabar Dairy, a co-operative in Gujarat.

The paste was applied on 50 Holstein Friesian cows with sub-clinical mastitis. The success rate of the preparation was 92 per cent, it notes in The Pharma Innovation Journal in July 2020.

NDDB, along with TDU, is working with more than 25 milk unions and producer companies across nine states to promote herbal practices under its Mastitis Control Popularisation Project.

Its annual report of 2018-19 suggests that the use of antibiotics has drastically reduced among farmers associated with the milk unions.

“We have trained 1,750 veterinarians and 30,000 farmers to use ethnoveterinary practices, and to reduce antibiotic use and related residues in milk,” says M N Balakrishnan Nair, Emeritus Prof essor, School of Health Sciences, TDU.

In June 2017, TDU published a study in the Journal of Veterinary Sciences, which says the use of ethnoveterinary medicines has resulted in a reduction of 18-49 per cent of antibiotic residues in milk. In recent years, some milk federations have started promoting NDDB’s herbal mixes among their member-farmers.

The Gujarat Co-operative Milk Marketing Federati on Ltd (GCMMF), which sells milk under brand name Amul, supplies it at a reasonable rate through a network of veterinary doctors and extension workers. RS Sodhi, managing director, GCMMF (Amul), says, “Since 2018-19, we have treated about 80 per cent of our 210,000 animals using ethnove terinary medicines. This has helped reduce the usage of antibiotics and overall treatment cost of cattle.”

Taking a different approach, the Jharkhand State Cooperative Milk Producers’ Federation Ltd (JMF) regularly conducts training progra mmes for milk producers to explain them the impacts of irresponsible use of antibiotics on livestock and the benefits of ethnoveterinary medicines. As part of the training, dairy farmers are taken on a tour to the Medha Sanjeevani Herbal Garden, which houses more than 55 species of herbs, and taught how to prepare medicines using them. Saplings are also provided free of cost to interested farmers.

CSE’s interactions with milk fed erations show that most use the combination of aloe vera, turmeric and lime, for its broad spectrum antimicrobial activity helps prevent swelling and redness caused due to mastitis. Besides, one does not need to follow the stipulated “withdrawal period” after using the herbal mix.

It’s surprising that some dairy farmers avoid using herbal treatments despite being well aware of the formulations and their benefits.

“Herbal treatments do not have any side effects on cattle as well as on the milk consumer,” says Aseem Rawat, owner of Hetha dairy farm in Ghaziabad, Uttar Pradesh, whose herd of 700-odd cows consists of indigenous high-yielding breeds of Gir, Sahiwal and Tharparkar. Yet, Rawat prefers using antibiotics along with Mastilep, a herbal formulation sold commercially.

“I do not want to take any chances,” he says. Padam Sorout, a farmer from Palwal in Haryana, who owns three buffaloes and two cows and uses the milk for household consumption, says, “Desi ilaaj (home remedies) are undoubtedly good, but I find it difficult to grow plants like aloe vera.”

Naresh Jain, who owns 105 cows and runs Sudarshan Dairy in Sonipat, Haryana, also prefers using antibiotics over traditional medicines. “They act too slow,” he says. A veterinarian associated with a dairy farm in Noida, Uttar Pradesh, says farm staff do not want to take the pain of preparing herbal medicines or treating animals with herbal methods. “They give a heavy antibiotic jab in an attempt to treat the animal in a single shot.”

Experts say one cannot solely depend on ethnoveterinary medicines for tackling mastitis.

In India, breeds such as the Holstein Friesan and Jersey, that have originated in temperate climatic zones, are more susceptible to a variety of diseases, as compared to indigenous breeds. High-yielding breeds are also more prone to mastitis.

“We cannot manage the situation sustainably unless we also consider factors such as breed, intensification of farms and better management of farm animals.” 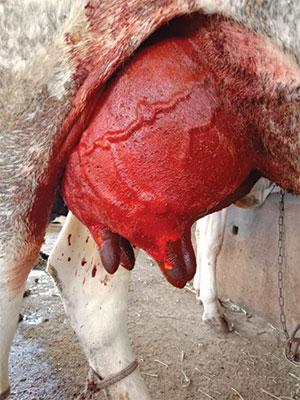 Early diagnosis can help prevent the infection from becoming chronic and thereby, reduce the need to use antibiotics. A plethora of diagnostic tools are available in the market for early detection of mastitis.

The cheapest of all is California Mastitis Test, which offers instant result by changing colour or thickening of the sample.

Then there are sophisticated ones, including somatic cell count test (uses strips to measure somatic cells in milk sample whose number increases during mastitis), electrical conductivity measurement (which checks conductivity in milk due to increased concentration of sodium ion [Na+] and chloride ion [Cl−] in mastitic milk), bromothymol blue test (which involves change in colour of strips due to change in pH of milk) and culturing of bacteria from milk. However, few are aware of these tests.

To discourage farmers from using antibiotics and to ensure that they follow the mandatory “withdrawal period” after administration of antibiotics, routine moni toring of milk at processing plants can be a way out.

Though FSSAI recommends such tests once in three months, milk federations cite lack of availability of kits and increased cost as impediments. CSE research ers have found there are at least five such kits being used by some milk federati ons; two are approved by FSSAI. Besides, not all of the kits are expensive (see ‘Test on the go’,).

Clearly, we need a multi-pronged approach to reduce the burden of AMR. According to CSE researchers, stake-holders linked to the dairy sector such as DAHD, the Indian Council of Agricultural Research and NDDB should come together to develop a structured research agenda on the use of ethnoveterinary medicines and their role in reducing antibiotic misuse.

Based on their findings, the research can be scaled up and their use in the dairy sector be promoted.

Available best practices should also be documented to help in informed decision-making. State-level milk federations should work with NDDB to explore the use of such alternatives. Awareness drives on implications of antibiotic use in dairy cattle, importance of farm hygiene, early disease diagnosis for farmers and veterinarians should be carried out.

Test on the go

*Rapid test kit approved by the FSSAI; Note: The list prepared by the Centre for Science and Environment is based on its research, interviews with representatives from milk unions and milk federations. However, there are other rapid testing kits available for monitoring antibiotic residues in milk.