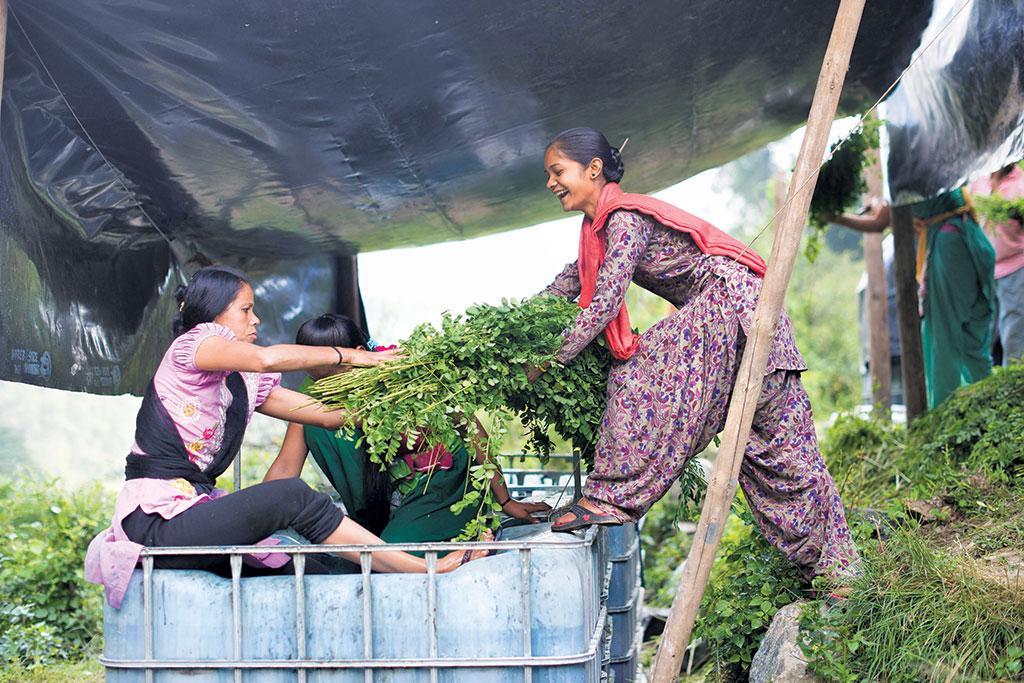 Women loading indigo leaves on a truck after harvesting them in a village in Pithoragarh district (Courtesy: Avani Society)

Indigo, the most beautiful and expensive of all natural dyes in common use, has always been closely associated with India, as its name implies. Before Independence, the countryside of Bengal and Bihar were the major areas for cultivating indigo. A spur in the production of indigo, jute, tea and other cash crops, which replaced food crops such as rice and left farmers bereft of food security, eventually led to the “Blue Rebellion” or the Nil Satyagrah of 1859. Originally extracted from plants, today indigo is synthetically produced on an industrial scale as it binds well with fabrics when used as a dye.

The indigo crop in recent times is changing the economic landscape from Tamil Nadu and Andhra Pradesh to the terrains of Uttarakhand and even the Tibetan plateau. Different varieties of indigo, ranging from the most common Indigofera tinctoria and Indigo heterantha to a species from Japan, are being experimented with. About 200 farmers in Pithoragarh and Bageshwar districts in Uttarakhand have taken up indigo farming. According to Avani Society, a non-profit based in the region and working on instituting an indigo supply chain in the area, farmers have been able to earn a profit of around Rs 2,000-3,000 through indigo cultivation over a three-month cycle of 10-12 working days in all, depending on factors such as rainfall and sunlight. “We are looking at indigo as a crop for empowerment and regeneration,” says Rashmi Bharti, co-founder of Avani Society.

Avani Society’s intervention starts from the distribution of seeds to farmers and extends to marketing support. Indigo cultivation has helped in regenerating wastelands, enriching the soil and curbing soil erosion, explains Bharti. However, the organisation is not promoting indigo cultivation over cultivation of food crops. The farmers continue to grow wheat, lentils and rice and use only a part of their land to grow indigo. Due to irregular rains and crop damage by monkeys and wild boar, many farmers have been forced to reduce farming of regular crops but indigo has not completely replaced regular farming so far. As of now, the total area under cultivation in these districts is around 99 nalli (1 nalli is equal to 200 sq m), or nearly 2 hectares.

The colour of money

Since indigo is a cash crop and provides an important source of supplementary in-come, farmers like 24-year-old Sushila Devi, from Simalta village in Pithoragarh, are happy to experiment with it. Sushila says that the biggest benefit for her is the ability to use land between June-October to grow a crop that is not at risk from attacks by monkeys and fetches her some additional savings of over Rs 2,000-3,000 a year. Small pieces of land, merely 6 sq m, are sufficient to grow indigo. Sushila says due to monetary and ecological benefits of the crop, many women in the area have also taken up indigo farming.

Some women, like 33-year-old Neema Sanyal from Chankana village, are involved in more than just the cultivation of indigo. Neema is also engaged in colour extraction and dyeing of clothes for the past 4-5 years. Once the leaves are harvested, the dyeing process is undertaken involving an engagement of 7-8 hours every day. The process of extracting the colour depends on the variant of colour that is needed. Colours are primarily in three categories—dark blue, light blue and very light blue. Dyed threads are then used for making shawls, stoles and jackets which are then sold to markets in Delhi and Mumbai. Neema along with 5-6 other women have visited Dilli Haat in New Delhi and markets in Chennai and Mumbai over the past many years. Even Kumaoni weavers use these dyes on shawls, scarves and products such as indigenous woollen weaves. These are also sold through craft-based organisations.

A crop for all seasons

However, it is a challenge to provide market visibility to women, who have benefitted from indigo cultivation, but lack skills in selling their creations to consumers. Avani Society helps these women by buying the dyed fabric from them. The organisation has supported farmers with the idea of building a sustainable “farmer to table model” also popularly known as the “seed to scarf” model.

“The dye is non-polluting and does not add to soil and water pollution,” says Bharti. Additionally, indigo dyes are also used in making herbal colours and crayons.

Indigo has acclimatised well to the Himalayan region of Uttarakhand in addition to the southern states. Though it is a tropical crop, it can also be grown in temperate areas. But the crop has to be protected from excessive rainfall, water logging and hailstorms. G S Rajwar, fellow at the Linnean Society of London, an expert in botanical and environmental studies in the Himalayan region, says that as the crop is leguminous, it has great potential for agroforestry, intercropping especially with kharif crops like tur and can contribute a great deal towards containing soil erosion as it is an excellent soil binder. In Uttarakhand, where monkeys are a big problem, indigo can be used as live fencing, to ward off unwanted foraging from animals, he says.

Due to the growing demand of “swadeshi” looms and eco-friendly textiles as well as to conserve heritage crafts and arts, there is a need to revive the use of indigo in the apparel, textiles and cosmetics industry. The large-scale revival of indigo is difficult because it is labour-intensive, but with adequate governmental and organisational support, farmers may be able to enhance incomes and contribute to ecological crafts while also greening the topography of wastelands.

(This article was first published in the April 1-15th issue of Down To Earth magazine).