In North-east India, children of the Khasi Hills (Meghalaya) learn slash and burn cultivation, an intergenerational yet controversial indigenous practice 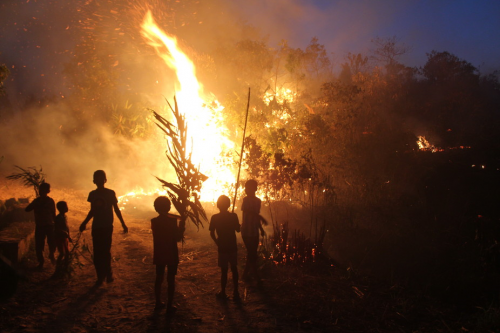 On a wintry February evening, along a narrow road leading to a village nestled in the East Khasi Hills in India’s north-east, some children are playfully running around with branches of dry trees.

Smoke hangs in the cold air. Around another winding turn on the road, a fire in the forest comes into sight. A local farmer is burning the undergrowth of the land he owns, employing the traditional slash-and-burn cultivation method. This method, also known as swidden agriculture, is referred to locally as jhum cultivation and has been prevalent across South and South-East Asia for centuries.

The dry winter months of January, February and March sees scores of such fires crackling their way through forests, across all states of north-east India.

This fire-fallow farming method helps fix potash in the soil, thereby increasing its fertility. As I stop to watch the fire spread through the forest undergrowth – a spectacular sight – the children come and join me. Only later do I realise that they were not just playing around: they were there as fire-fighters.

I asked the farmer about his land. He explained that he plans to grow pineapples after the soil is prepared. The pineapples of Meghalaya are one of the sweetest and juiciest in northeast India. This forest land lies along an arterial road connecting villages near the border with Bangladesh. Livelihoods in these villages are sustained by farming privately owned plots of land or community-owned forests adjoining the village. The major crops are betel nuts and leaves, pineapple, jackfruit, oranges, bay leaves, bamboo, tapioca and honey.

As the fire quickly spread through the forest, the farmer called upon the children to begin their fire-fighting activities. The goal is not to allow the fire to spread to the adjoining plot of land. The children get busy brandishing the branches they had been playing with at the edge of the plot. They rush into small nooks and corners to effectively contain the fire and put it out.

The fire controlled, the land is spread with ash and dotted with embers emanating smoke. Not too dangerous an activity for children to perform? I ask the farmer. He shrugs, saying that it is normal. The children need to learn the ways of the forest, of preparing the land for cultivation. They need to know how to conserve water in the dry season and deal with turbulent streams in the monsoon, manage fire and be aware of its implications and assess wind directions from an early age.

He explains that his community, the War-Khasi, a sub-tribe of the Khasi, has lived off the land for time immemorial.

Their traditional knowledge systems and means of farming have to be passed on to the next generation. The children are experts at their task and seem to be enjoying the fire-fighting.

Pilot projects have been initiated to counsel farmers to alternate management of farming practices, for example using conservation agriculture in neighbouring Nagaland.

But when I ask about the government’s policy, the farmer points out that this is the only method he knows, and that it has stood the test of time.

In 2009, Yale anthropologist and South-East Asian specialist James Scott argued that the “art of not being governed”, has been integral to the South-East Asian upland communities for centuries. Scott wrote that such communities, like those in north-east India, had long managed to remain “ungoverned”, avoid taxes and escape slavery and indentured labour conditions.

Under this system, jhum was one of the preferred mechanisms to keep people moving from one part of their hills to another. This allowed such hill communities to skirt land tenure systems and effectively kept governance and the state at bay.

In the present day, however, communities do not move as much, and the intervening cycles of cultivating the same plot of land has become shorter. The traditional practice of slash and burn continues to be employed, even if not many crops are planted in the same plot of land.

In this instance, the farmer explains that he will grow mostly pineapples, which will be interspersed with betel nut, jackfruit and bay leaf trees. There will be broom grass as well in his land, which he does not need to grow, and which is an intensely invasive species. He laments that it consumes a lot of water and degrades the land faster, but is a very lucrative cash crop in the region, used to make brooms.

Slowly but surely, because of a rise in the demands and pressures of the market economy and greater market connectivity, monoculture – only growing one crop – has become the norm on many plots of land, badly affecting biodiversity.

Elsewhere in north-east India, the state of Mizoram has seen the slow and steady march of oil palm plantations. The state government supports such programmes under its New Land Use Policy.

Kolasib in north Mizoram was declared an “oil palm district” in 2014. Monocultures such as rubber and other cash crops have been promoted in the hill areas by various land use schemes of the government over the past decade.

This will have a direct impact on small hill communities and local food diversity and sustainability. It is important to assess the impact of the loss of slash-and-burn method of cultivation on indigenous cultures, livelihoods and on the larger environment.

James Scott points out that swidden cultivation is on the decline across South and South-East Asia. However, we need to examine the stories of the existence of such fire-fallow methods. Can the slash-and-burn methods continue to exist and prosper, and under what conditions? What would the future hold for such farm practices? The clash between traditional knowledge systems and modern land governance systems could prevent the sharing of knowledge between generations, and the symbiotic link that locals have with their ecology and environment.

A community-based understanding of ecology and environment is needed to bring environmental politics and developmental debates in north-east India back to the people. For now, fires continue to rage among competing development models over what constitutes long-term sustainability.