The minuscule system of pricing

First, a farmer must sell the produce at a price wrongly discounted by unscientific calculation. Second, an unholy nexus of many players pushes the price down. Result: agriculture remains a loss-making venture and the debt trail leads to fatal consequences 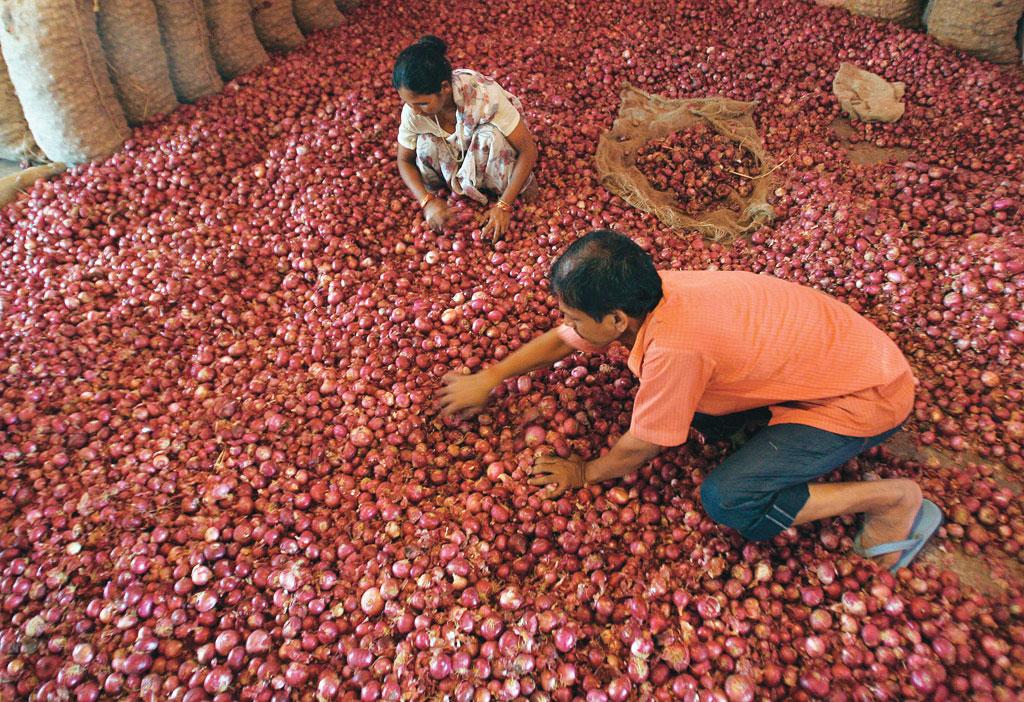 The tragedy with farmers is that they earn less as they grow more. Last year, farmers of Kurnool district in Andhra Pradesh were forced to sell onions for less than Rs 1 per kg (Photo: Reuters)

The agriculture market cannot be explained by the simple principle of supply and demand. Rather, it is a devilish interplay of many vested interests that turn a blind eye to farmers’ concerns. There are more dubious players in the ubiquitous mandis or agriculture markets across India than in any other commodity markets. Both local political workers and power players in the Union Ministry of Agriculture and Farmers Welfare are part of this nexus. Starting from the stage where the government fixes the minimum support price (MSP) for agricultural produce to the mandis where it is sold, our farmers suffer.

Government declares MSP for 24 crops, but it primarily procures only wheat and paddy at that rate, leaving other crops to market volatilities. According to the National Sample Survey Office (NSSO) analysis, only six per cent of Indian farmers sell their crops at MSP and they mostly belong to major grain-producing states—Punjab and Haryana.

The Commission for Agricultural Costs and Prices (CACP), under the Indian Council of Agricultural Research (ICAR), calculates MSP based on cost of production in 8,400 landholdings, which is 0.006 per cent of India’s total landholdings. Not all the factors used for MSP calculation are related to input costs. There are also subjective ones like the demand and supply trends in national and international markets. After Y K Alagh Committee’s recommendation in 2003, CACP included insurance premium paid by farmers and marketing and transportation costs. But calculation of production cost does not consider farmers’ profit. This is where the method of MSP calculation faces severe criticism.

“Analysis based on the cost of cultivation survey data published by CACP from 1972-73 to 2013-14 shows that farmers have not earned profit from most food- and non-food grain crops in major growing regions since the mid-1990s,” says A. Narayanamoorthy, Professor and Head, Department of Economics and Rural Development, Alagappa University, Tamil Nadu. Devinder Sharma, a food and trade policy analyst, claims that the CACP reports suggest that MSP does not cover the production cost of many food grains. T N Prakash Kamaraddi, chairperson of Karnataka CACP says, “MSP calculated for food grains is not enough to make agriculture a profitable enterprise.”

A former chairman of CACP questions data collection and cost calculation methods adopted by some state agricultural universities as CACP calculation is based on input costs data that are two to three years old. Thus, the suggested price does not include the enhanced input costs a farmer incurs. A parliamentary panel on pricing of agriculture produce, chaired by Basudev Acharya, recommended a transition towards remunerative pricing model for all the 24 crops as the current pricing model does not keep profit margin over cost of production.

The National Democratic Alliance (NDA-I) government in 2000 had initiated Market Intervention Scheme (MIS) to help farmers get reasonable price in the face of market volatilities. MIS focussed on perishable agri-horticultural produces like potato, onion and tomato. This ad-hoc scheme, meant only for limited purchases and for specific period, failed as the Centre shared just 50 per cent of the financial burden that states had to bear for procuring perishable agricultural produce whose MSP has not been announced and prices have crashed. S S Acharya, former Chairman of CACP says, “This scheme was never used to control price volatility. Due to fiscal burden, states also did not show any interest.”

When the NDA-II government came to power in 2014, it replaced MIS with Price Stabilisation Fund (PSF). Under this scheme, state governments send procurement proposals to the Centre in the wake of price crash. While the Centre gives the required fund, states also have to invest a matching fund. In 2015, PSF had a budget of Rs 500 crore for only onion and potato, as distress selling was mostly reported for these two crops. In 2016, PSF was used only for procuring pulses. Hence, it did not help the farmers much.

As the pricing mechanism failed, the focus shifted to the markets. In April 2016, the Centre launched eNAM, an online portal to provide a unified national market to farmers. This May, Pune-based Maharashtra Farmers Producing Companies Consortium (MAHAFPC)—an association of farmers and their companies—wanted to sell 8,000 tonnes of chickpea (chana daal) through eNAM. When Kiran Dumbre of MAHAFPC contacted eNAM headquarters in Delhi to know the procedure, he was advised to contact the nearest APMC for registering the produce. As Pune APMC, the nearest market linked to eNAM, only traded jaggery online, Kiran was referred to Latur APMC, which is 300 km from Pune. Latur market officials told him that their online portal would display the produce only when the consignment enters their market premise.

The ordeal did not end there. When MAHAFPC’s truck reached Latur mandi, Kiran was asked to participate in spot trading. Precisely at this stage, traders and mandi officials try to eat into farmers’ earning by deliberately keeping prices low, knowing that the farmers who have come to the market have already spent enough on transportation of their produce. Kiran did not get a fair price for the produce. “I was asked to first participate in spot trading. Being unhappy with the price, I registered online, but we didn’t get the price we were looking for,” says Kiran. Later, MAHAFPC decided to sell the produce to Nagpur-based traders, some 450 km from Latur. Thus, it travelled 750 km to sell its produce. A farmer would not have even pursued this long as he doesn’t have the knowledge and resources at his disposal.

“eNAM has not brought any convenience to farmers; it rather adds to their woes. The cumbersome process ensures that traders continue to rule the roost,” says Yogesh Thorat, chairperson of MAHAFPC. “eNAM, in its current form, will not benefit farmers but traders of big mandis who access to Internet,” says Gokul Pattnaik, Chairman of Global Agrisystem, a consultant in Delhi. While launching eNAM, the government had planned to connect 400 mandis by March 2017 and another 185 mandis by March 2018. But according to eNAM’s website, only 250 mandis have been connected so far. “Traders are not interested in eNAM as they don’t want to give farmers a chance to involve in price discovery mechanism,” says JP Mishra, agriculture advisor at NITI Aayog.

As agriculture market is a state subject, Centre cannot intervene directly. Despite the Centre’s claim that the states are in agreement with its market reform policies, the reality is different. Punjab, Haryana and Maharashtra are reluctant to allow traders from outside the state to bid online. Madhya Pradesh allowed only one of its total 546 mandis to be linked to markets in other states and Haryana experimented with just safflower—a minor rabi crop. Moreover, eNAM facility is available only at the mandis, which means, farmers have to visit a mandi to do online trading. It defeats the purpose of digitising the trading process. “State governments are not interested in freeing up markets for farmers as they earn revenue from mandi taxes that go up to around 15 per cent in Punjab and Haryana. The traders and commissioning agents probably have political connections as well,” says Parvesh Sharma, a former bureaucrat who is into agribusiness.

All the 2,477 APMC-regulated mandis are prone to corruption. In Haryana APMCs, officials feed data of spot trading to eNAM portal to prove the success of online trading. It is also interesting to know that the revenue earned by the APMCs does not go to state exchequer. Hence, state legislature’s approval is not needed to utilise the funds. “APMCs’ operations don’t come under any scrutiny, thus, opening the gate of political manipulation and aggravating farmers’ sufferings,” says Pattnaik. “Instead of being utilised for improving market infrastructure and enabling better price discovery, these funds are used to cater to the whims and fancies of state government,” says a senior official of the Uttar Pradesh government. According to a senior official of the Punjab government, the state uses the fund for religious purposes, giving salary to government staff and providing small contracts to political workers for building village roads or panchayat building.

Given India’s high population density, it needs around 50,000 regulated mandis to provide price discovery facility to all farmers. However, it only has around 7,200. According to the Union agriculture ministry, a regulated market is available per 462 sq km while ideally, there should be one every 5 sq km. Lesser the number of mandis, lower are the chances for farmers to get right price. It weeds out competition as farmers can only sell their produce in designated mandis. “In 2003, the APMC Model Act had made provisions for private agencies to create mandis but the results are not encouraging,” says Acharya.

There is a huge deficit of warehouses and cold storages at the mandis. According to a study conducted by the International Food Policy Research Institute (IFPRI), only 60 per cent of APMCs have facilities like public notice systems and auction platform.

“About 80 per cent of markets do not have facilities like mechanical graders, sieves and public address system,” says PK Joshi, Director, South Asia, IFPRI. Despite infrastructure deficit, these mandis levy several charges at the first level of trading—weighing charges, commission fees on transactions between buyers and farmers, licensing fees from warehousing and loading agents—which have cascading effects on the prices as the commodity passes through the supply chain.