The seed banker: This Nuapatna farmer strives to save traditional paddy varieties 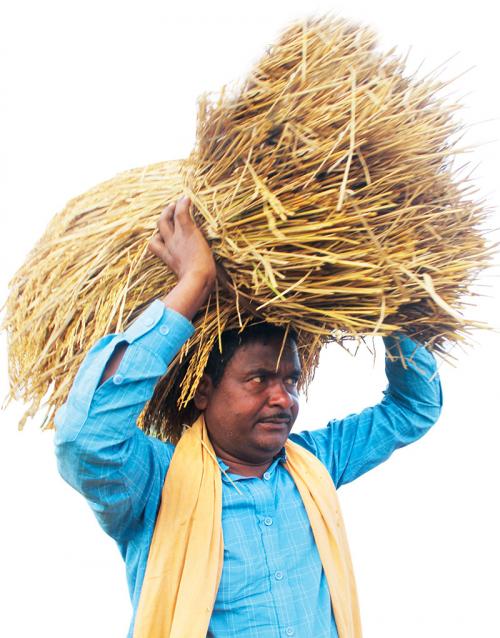 The eyes of Bijaya Jhankar twinkle as he approaches his 1.2 hectare (ha) farm for harvesting paddy. They are unlike any other varieties grown in his village Sanbaheli, which lies in the vast Sunabeda plateau of Odisha’s Nuapada district.

“They yield shorter grains, take longer to mature but are of tremendous sentimental value,” says Biju, as he is fondly called. Most people in Sanbaheli belong to the Chakotia Bhunjia adivasi community, a Particularly Vulnerable Tribal Group.

They have been growing high-yielding varieties, promoted by the state government for upliftment of the community. Biju avoids these crops. “They require chemical pesticides and fertilisers. I have a small land, and do not want to spoil it. The paddy I grow do not require any chemicals,” says Biju.

Biju grows nine traditional varieties of paddy that have a longer harvest duration of 130-150 days. These include scented varieties such as Chandan Baas, Tulsi Baas, Kalkati and Baas Patri; and the unscented Saputri, Garrakanthi, Ranki, Gelei Kanthi, Hirakani, Kulia and Darli. Chandan Baas is his favourite.

“It bears more than 200 seeds in one panicle. Germination of tillers per plant is also high — 40 in good soil conditions.”

Biju began cultivating Chandan Baas 20 years ago, using seeds he collected from a farmer in Patdarha village in Sunabeda.

On an average, he grows 6,000 kg of paddy along with other cereals and pulses.

Since Biju cannot grow all the varieties on his land, he encourages others in the region to do the same.

Tuna Chhatria of neighbouring Junapen village, who has started growing some traditional varieties after being encouraged by Biju, says “I have reserved my best lowland for Tulsi Baas, that provides about 3,000 kg of paddy per 0.6 ha. It is sufficient for my family’s consumption.”

Tuna is, however, reluctant to grow more as it does not command a decent price at mandis despite being organic, and fetch the same minimum support price (MSP) as high-yielding varieties. Farmers often end up selling these grains to intermediaries at prices lower than MSP.

Biju himself earned Rs 70,000 for 4,000 kg of his paddy last year, as against the Rs 75,000 he would have through MSP. “It is true that farmers looking to rake in more profits would prefer high-yielding varieties. But I tell them to go for traditional varieties at least for consumption, so that they are not lost,” he says.