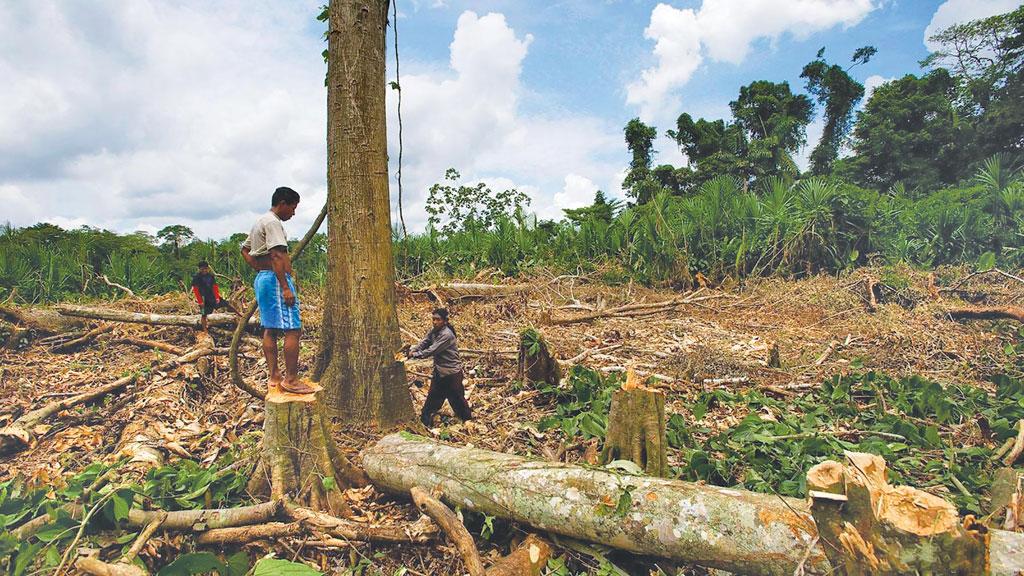 Ecuador has seen rapid deforestation in the past five years with farmers clearing patches to set up teak plantations (Source: ALAMY)

Ecudaor is witnessing an invasion. The aggressor is gaining land at a rapid pace, damaging the Latin American country’s flora and fauna diversity. And India is fuelling this takeover, though in an indirect way.

The invader is teak and India’s appetite for teak wood is the reason behind the spread of the tree in Ecuador. The process started in 2013, when Myanmar, which was India’s top source of teak (Tectona grandis), banned felling of the tree. Ecuador filled the vacuum and is now exporting 95 per cent of its teak wood to India, states Ecuador’s environment ministry data. The country’s teak export to India has seen a 50 per cent spike since 2012-13. According to Xavier Elizalde, executive director of the Ecuadorian Association of Producers of Teak and Tropical Timber, Ecuador is making a profit of $30 million a year from teak export.

However, teak is not native to Ecuador and is exhibiting invasive behaviour to survive. The tree grows fast—is ready to be cut in six to eight years—and regrows at least six times if the main root is not damaged. It is difficult to uproot because the main root runs 6 m underground, drawing more than its share of water and minerals. What’s worse, because teak is a non-native, there are no natural agents to quickly decompose its leaves. “Since teak came, nothing else grows. Cotton, tomatoes, nothing,” says Hacienda Vera, a teak farmer of Guayas province. And the growth in teak plantations has caused deforestation and loss of agricultural land. According to Global Forest Watch, an initiative by the World Resources Institute to monitor forests across the world, Ecuador lost about 0.4 million ha tree cover between 2001 and 2015. About 30 per cent of this loss (0.18 million ha) was between 2012 and 2015. How much of this is due to spread of teak is yet to be studied, but trends point at teak.

“There are no nationwide figures, but teak plantations have increased in Ecuador over the years, especially in Manabi and Guayas provinces,” says Nick Slobodian, director of Agroforestry for the Third Millennium Alliance, a non-profit working on issues related to sustainable development in Ecuador. “Inevitably, this expansion is at the expense of natural forests,” he adds.

An Ecuadorian environment ministry document titled, “National Plan for the Restoration of Forests (2014)”, blames expansion of the agricultural land for deforestation. But experts contradict this.

“Recent studies point that crops cultivated by marginal farmers, which feed the country, have not increased. Meanwhile, there has been a rapid growth in agribusiness—African palm, sugarcane, eucalyptus, pine and teak plantations—which is obviously the cause of this deforestation,” says Nathalia Bonilla of Accion Ecologica, an Ecuador-based non-profit working on environmental issues.

“Many lands that are being occupied by teak are agricultural, owned by small farmers and contain great agrobiodiversity. The teak causes these crops to move, impacting food sovereignty and small-scale farmers. It should be noted that entrepreneurs are looking for the best agricultural land for teak,” adds Bonilla. Of South America’s 12 countries, Ecuador is placed eighth in terms of food security, as per The Economist’s Global Food Security Index.

Alanso Durán, who owns an over 16 ha teak plantation in Guayas province, says that teak is a major drain on groundwater. “I had a well that gave me enough water, but within two years of planting teak, the well started to dry and completely ran out of water.

Teak absorbs so much water that the ground is left dry.” Adds Bonilla, “Since the phenomenon is recent, it would take time before studies corroborate what farmers are telling. But the signs are there for everyone to see.”

The tree is not even used by avian species as habitat. There are no Ecuador-specific study on teak-avian relationship, but one study published by the American Ornithological Society this year says that the number of bird species in teak plantations of Mizoram were almost half of those found in rainforests of the state “Other trees have nests, but not teak. Even wasps don’t dwell in these trees. Before teak plantations were set up, there were many animals here, but they have disappeared,” says Servio La Chola, a farmer in Guayas.

The impact of teak plantations in non-native ecosystems has also been identified by studies. “As happens with other trees, teak has very different ecological effects, depending on whether it grows in native forests, or as a self-seeded invasive species (as in some of the Guayas landholdings and also in Thailand), or in industrial plantations (as in Guayas and also in Thailand). In monoculture plantations, teak makes the soil hard and the toxins in its leaves have more severe effects on other species. The larger the monoculture plantations, the worse the environmental effects,” says Larry Lohmann of Corner House, a UK-based non-profit working on community rights and environment.

“When teak is extracted, the land is unprotected and has no minerals. We have to grow sicapé, a small plant that requires heavy watering, to restore the land. The plant is unfit for human consumption, but cattle can eat it,” says Durán.

Indian regulations are also causing a health hazard for Ecuadorians employed in teak export. Since 2003, India only allows import of teak that has been fumigated by methyl bromide, an endocrine-disrupting chemical banned in industrialised countries under the Montreal Protocol. In 2015, it was banned in Ecuador too. But India allowed Ecuador to continue teak export without fumigation till October 2016, when it was stopped. It resumed this January after India allowed Ecuador to use another chemical—aluminium phosphide—for fumigation. But this chemical is also extremely harmful, and damages the liver and kidney.

Despite these problems, the Ecuador government continues to promote teak cultivations. In 2015, the Ecuadorian agriculture ministry announced plans to develop 0.1 million ha of teak plantations by 2017. The ministry’s Incentives Program for Commercial Reforestation provides subsidies for setting up forest plantations.

“What is needed here is not a ban on teak plantations, but an approach to grow the tree in a sustainable way,” advises Slobodian.