The last full budget presented by Arun Jaitley was overwhelmingly focused on agriculture and public health. The catch lies in what he did not say 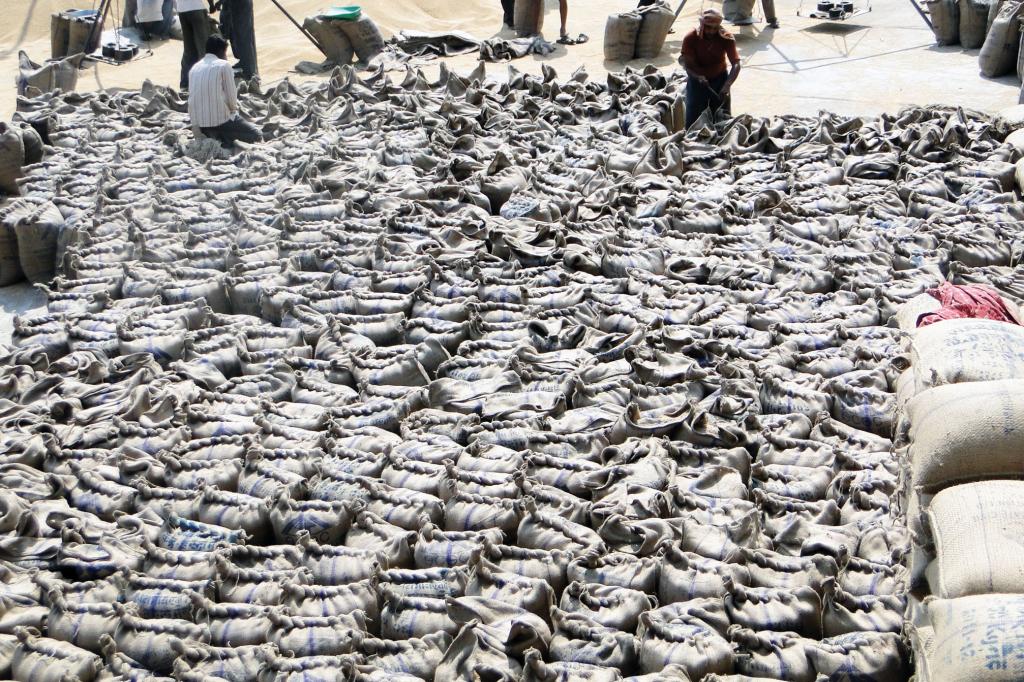 94 per cent of Indian farmers do not get MSP but live at the mercy of open markets like this wheat mandi in Madhya Pradesh (Photo: Rakesh Malviya)

The last full budget presented by Arun Jaitley was overwhelmingly focused on pro-people initiatives and the finance minister spent the initial 20 minutes of his speech on agriculture. The second most important part of his speech was public health. Jaitley was also eager to underline the achievements of his government ahead of next year's general elections and highlighted programmes like Ujjwala Yojana, Saubhagya Yojana, implementation of GST and improved ranking in ease of doing business. However, the government neglected a number of issues like climate change and its flagship programme Swachh Bharat Mission.

THE HOLLOW PROMISE OF INCREASING MSP

On February 1, when Finance Minister Arun Jaitley said in the budget announcement that farmers would get 50 per cent higher minimum support price (MSP) than the cost of production for all crops grown in the current rabi season (2017-18) and upcoming kharif season, it should have infused enthusiasm among the country’s small farmers. But it has failed to uplift the spirit of Ramlal Singh, a small farmer from Bihar’s Sitamarhi district. Singh is one among the country’s 94 per cent of farmers who fail to benefit from MSP, no matter how high it is, in the absence of assured procurement by the government. Last year, though the government had fixed MSP of paddy at Rs 1,550 per quintal, Singh was forced to sell his produce in the open market for Rs 1,200.

If you think Jaitley’s announcement will benefit those who manage to sell their produce at MSP, think again. The government has not defined the cost of production, which lies at the heart of calculating MSP. The Commission for Agricultural Costs and Prices (CACP), which formulates and recommends MSP, categorises three types of cost of production: A2, A2+FL and C2. A2 represents the actual cost of farming including seeds, fertilisers and hired labourers. A2+FL represents family labourers in addition to A2. And C2 represents the cost of land rentals or interest on invested capital in addition to A2+FL. As many as 16 agriculture universities and institutions based in 19 states collect data from 10 farms of different sizes every day to ascertain the data related to cost of production.

The profitability of a farmer varies depending on the formula CACP chooses to follow. In 2006, the Swaminathan Commi ssion recommended that MSP be decided on C2+50 per cent as it gives the farmer maximum return on the investment. In 2014 the National Democratic Alliance (NDA) came to power promising that it would implement the Commission’s recommendation. Even during the budget announcement, Jaitley claimed that the Union government has been fulfilling the promise of providing 50 per cent higher MSP than the cost of production for certain rabi crops. But a calculation by Down To Earth shows that the government is considering A2+FL, and not C2, as the cost of production for calculating MSP (see ‘Classification of MSP’). 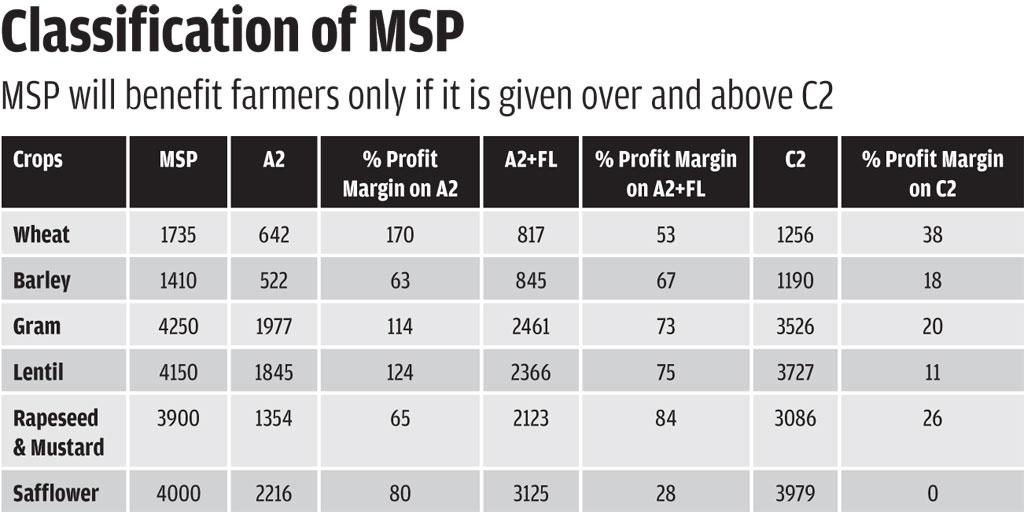 Probably, this is the reason in 2015, soon after coming to power, the government had filed an affidavit in the Supreme Court saying that it was not possible to provide 50 per cent higher MSP over the cost of production on the ground of distortion of market. “The government claims of providing 50 per cent above MSP but its own documents show that the income of farmers is stagnant in the last four years. This budget is another attempt to cheat and lie to 100 million farmers,” says Yogendra Yadav, founder of Swaraj India, an umbrella organisation of farmers groups.

The 2018 budget is a case of another missed opportunity to address the cascading agrarian crisis, which has led to the suicide of a farmer every 40 minutes and 100 farmers leaving agriculture every day. Instead of dealing with the problem, the government is misrepresenting facts keeping upcoming elections in mind.

CAN INSURANCE SOLVE OUR HEALTH NEEDS?

Budget 2018 announced the grand National Health Protection Scheme (NHPS) that aims to provide secondary and tertiary care for free to half-a-billion Indians. This is 40 per cent of the country’s population. While the scheme, touted as the world’s largest government-funded healthcare programme, is still opaque, the beneficiaries would largely be from the poor and vulnerable groups. Under NHPS, for which government has announced Rs 2,050 crore, each family would be insured for Rs 5 lakh. 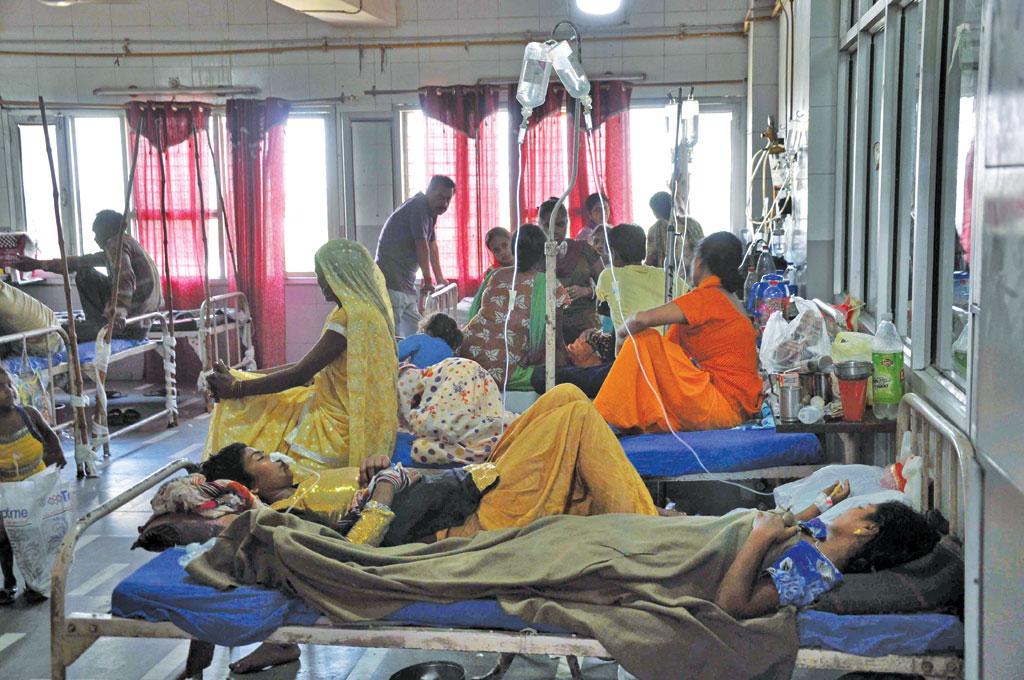 The announcement, which appeared too less to benefit the target group, immediately ran into controversy, and analysts wondered who will foot the premium for availing the insurance. The next day, NITI Aayog called a press meet and clarified that the Centre will pay for the premium along with states, which will cost it Rs 1,200 per family.

An analysis by Down To Earth shows even by this claim, NHPS would require Rs 12,000 crore, or six times the money assured. Now, let’s estimate the amount the government requires to make its grand announcement a success. As of now, the government offers health insurance cover of Rs 30,000 to each of 300 million families below the poverty line through its Rashtriya Swasthya Bima Yojna (RSBY).

“Both the Centre and states pay for the premium, which comes to Rs 92 per person or about Rs 500 per family of five,” explains Ravi Duggal, country coordinator of International Budget Partnership, a Washington-based non-profit.

Now if you increase the insurance cover to Rs 5 lakh, the premium will rise to Rs 8,333 per family. At this rate, the government needs to spend at least Rs 4,94,400 crore.

NHPS also misses out on the out-patient requirements of the sick. A research article published in PLOS in November 2016 says that households with an ailing person spend about 10 per cent of their monthly income on OPD treatment.

Besides, insurance under RSBY has a notorious past. For instance in 2012, Down To Earth reported a case in Samastipur district in Bihar, where around 10,000 unnecessary hysterectomies were performed to get insurance money.

(This story was first published in the 16-28 February issue of Down To Earth).