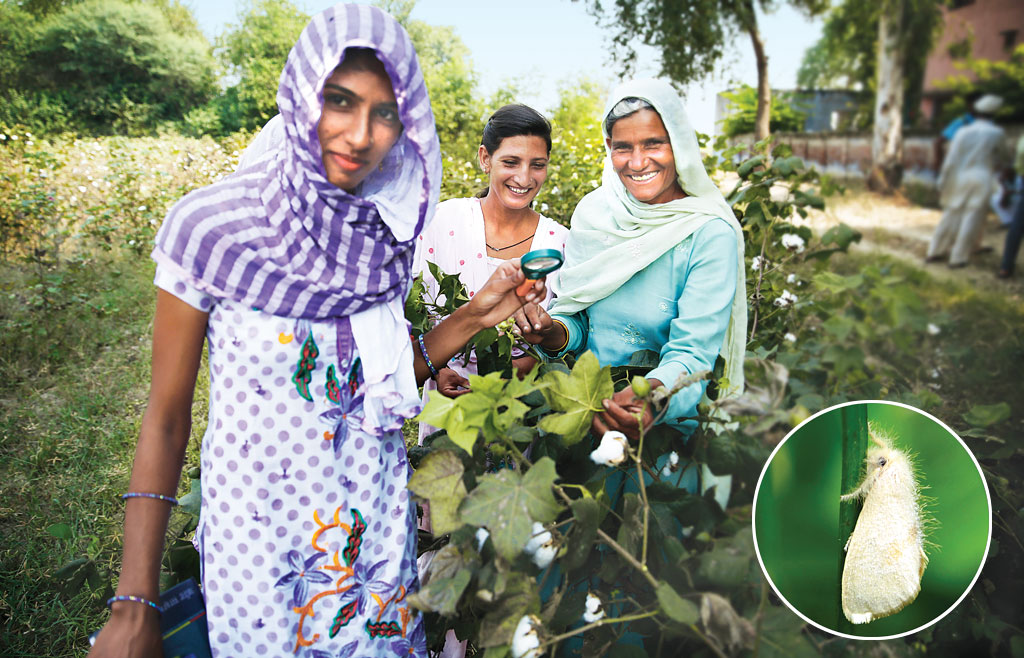 LOOK HERE, the red pest you see is Chrysopa,” says an excited Manisha, while navigating through her cotton field in Haryana’s Nidana village. “A single Chrysopa, a carnivorous pest, eats around 125-150 whiteflies a day,” says the 24-year-old. Further ahead in her 0.8-hectare cotton plantation, she picks another plant leaf to show a pest she calls deedarbora. “This big-eyed pest injects its eggs in herbivorous pests like whiteflies and kills them. This helps in population control of herbivorous pests that cause crop loss,” says Manisha, who is locally called keet mastarni (pest teacher).

Nidana is among 18 villages in Haryana’s Jind district where farmers have ditched pesticides and used carnivorous pests to fight harmful pests such as the whitefly. There reason is pesticides kill the friendly pests more than the harmful ones, and they are expensive too, says Sheela, another keet mastarni from Radhana village.

The success of these villages comes at a time when farmers in Haryana and neighbouring Punjab and Rajasthan have been devastated with whitefly infestation that has caused widespread destruction this year. The three states have already lost over 75 per cent of their cotton plantations. Over 18 farmers have committed suicide in Punjab, which is the worst-affected state. Desperate farmers are now staging protests for government support. Interestingly, over 95 per cent of the damaged cotton crops is hybrid Bt cotton.

The total loss due to this is around Rs 4,500 crore. The affected farmers in these states are angry because the government misled them into using pesticides and hybrid cotton varieties (see ‘Whitefly epidemic’).

The 18 villages began experimenting with carnivorous pests in 2007 with the help of late entomologist Surinder Dalal, who was the agriculture development officer in the district. Dalal showed the farmers that crop-destroying pests could be contained naturally by predator pests. 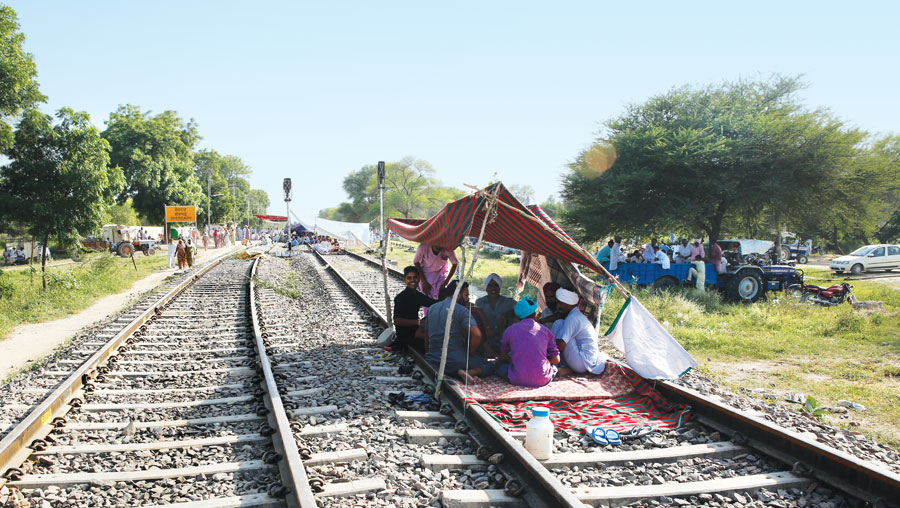 Out of every 4.5 g foods a plant makes through photosynthesis, the first 3 g is supplied to roots and stem and the remaining 1.5 g is for the pests, says Ahlawat. “In fact, plants use the surplus food to attract pests as they help in pollination,” says Ahlawat, who runs a farmers’ association group called Surinder Dalal Keet Saksharat Mission (SDKSM). The association has taken the initiative forward after Dalal’s death in 2013. It conducts training classes for farmers. The course comprises 18 classes, which are held once a week.

SDKSM volunteers say Bt Cotton attracts harmful pests such as whitefly, aphid (hara tila), thrips (churda), mite, miley bugs, more than normal cotton varieties because of their higher yield. And even pesticides attract pests because even they contain nutrition. “The pesticides are more effective against carnivorous pests which are not even a threat,” says Ahlawat.

“The real problem starts when these harmful pests start multiplying in the absence of natural predators and start damaging the crops,” says Gurusharan Singh, who teaches entomology at the Punjab Agricultural University. He adds that 60 per cent of total insecticides in the country are used in cotton crops. K R Kranti, director of the Central Cotton Research Institute, Nagpur, says that whitefly attacks can be minimised by spraying soapy or neem water.

In fact, SDKSM volunteers say that whiteflies only attack farms that have pesticides. They measured the permissible level of pests on a cotton plant leaf, which is called the Economic Thresholds Level (ETL), and found that up to six whiteflies on a cotton plant leaf is not harmful. “In the past eight years, I have not met a single farmer who complained of high ETL levels after not using pesticides. Only, farmers who use pesticides complain of poor ETL levels,” says Ahlawat. 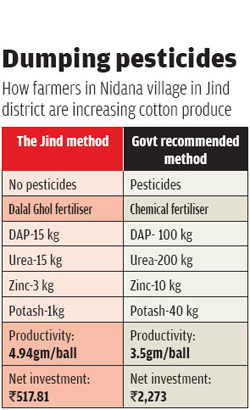 Sensing the benefits of not using chemicals, farmers tutored by SDKSM have also reduced their dependency on chemical fertilisers. They use a mix of chemical and organic fertilisers developed by the late Dalal because it is less toxic and substantially cheaper. The solution—2.5 kg each of diammonium phosphate (DAP) and urea, and 0.5 kg of zinc—is mixed with 100 litres of water and needs to be sprayed six times on 0.4 hectare of cotton during a season. “Dalal taught us the solution. So we kept its name after him as Dalal Ghol,” says Singh (see ‘Dumping pesticides’).

“We used to spend over Rs 25,000 only on pesticides in a season on cotton crops. We stopped this practice five years ago. From the money I saved, I have constructed a cemented cattle shed,” says Sheela. She owns 0.8-hectare of land, and says she has now leased an additional 0.8-hectare to grow cotton. “Government recommends farmers on how much fertilisers should be used, but normally farmers use much more because shopkeepers and agents of fertiliser companies influence them,” says SDKSM member Rajbir Singh.

The success of the initiative is now being recognised by experts. S S Siwach, director (research) at the CCS Haryana Agricultural University, says, “We regularly call these farmers to our workshop to take classes.” Over a dozen students from the university have done their PhD theses on the practices adopted by farmers in Jind district.

This year SDKSM for the first time moved beyond Jind district to train farmers. They have set up a training camp 70 km away in Byawar Khera village in Hisar district. “In Hisar, 70 farmers from 30 villages are attending the classes. They are from Punjab as well as other districts in Haryana,” says Rajbir. Manjit Singh, one of the teachers at Byawar, says five farmers from Sirsa district travel 125 km to attend the classes. “We have a habit of only waking up at the time of a disaster. We need to learn a lesson from Nidana village,” says Kranti.