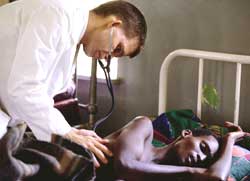 the human immunodeficiency virus (hiv) that causes aids is attenuating (getting weaker), claim scientists at the Institute of Tropical Medicine in Antwerp, Belgium. They say their study suggests if the attenuation observed in hiv-1 continues, aids may not remain life-threatening 50-100 years from now.

Attenuation is a survival tactic used by viruses that have fast rates of killing. If their virulence does not lessen, such viruses may be left with fewer or no hosts to live off. The attenuation observed in hiv is similar to that found in the simian immunodeficiency virus (commonly called siv), which is never fatal to its host, the chimpanzee.

"The mechanisms responsible for possible hiv-1 attenuation are complex but likely to involve directional evolution towards increased survival and transmission at the cost of lowering virulence," says lead author Kevin K Arien. The findings appear in aids (Vol 19, No 15, October 14, 2005), the journal of the International aids Society.

The study compared hiv-1 samples from 1986-1989 to that of strains from 2002-2003. Twelve samples from each period were tested on two counts -- pathogenic fitness (viral ability to multiply) and transmission fitness (ability to trigger immune response from white blood cells, or wbcs). The virus was allowed to infect and multiply in vitro in a nutrient medium containing wbcs.

The group found as many as 75 per cent of the newer samples were weaker, suggesting the virus is becoming less dangerous. Similar observations were earlier made by clinicians, who said progression seemed more rapid at the beginning of the epidemic. But the reason for this could not be established because of a total lack of treatment then.

"These findings suggest that hiv-1 will evolve to be less pathogenic and humans will evolve to be less susceptible. The big problem is that this is going to take many, many years (centuries) to have a major impact on the virus-host interaction. The findings ... have few immediate implications for either vaccine development or antiviral treatment," says Donald E Mosier, professor, department of immunology, the Scripps Research Institute, California, usa. Experts also say the sample size of the study is too small to conclude the aids scourge may be waning.

Scientists believe the latest findings will provide a new paradigm on how to tackle aids. A huge amount of money is being spent on finding a cure. For instance, the National Institutes of Health in the us alone had earmarked vaccine research funds of around us $240 million in 2000. It is estimated that vaccine research alone requires around us $1.2 billion annually.