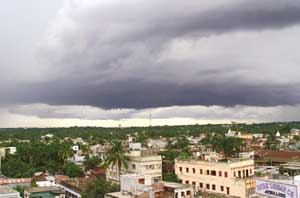 a recent study at the Scripps Institution of Oceanography, usa , claims that the combined effect of air pollution (aerosols/particulate matter) and greenhouse gases may induce greater variability in the Indian monsoon -- heightening its intensity or weakening it.

Published in the May 15, 2006, issue of the Journal of Climate (Vol 19, No 10), the study conducted by Chul Eddy Chung and V Ramanathan analyses sea-surface temperatures and other data from the Indian Ocean region. Many of the observations used were made during the Indian Ocean Experiment, a us $25-million international effort led by Scripps. "These remarkable studies are a further demonstration that the earth's climate, the average day-to-day weather conditions that profoundly affect virtually all sectors of human activities, hangs in delicate balance between natural and man-made forces," says Jay Fein, programme director in the us -based National Science Foundation's Division of Atmospheric Sciences.

Chung and Ramanathan found that less-than-expected temperatures in the northern part of the ocean have weakened wind circulation and monsoon conditions in the region, causing a 5 to 8 per cent fall in rainfall over India since the 1950s and increasing rainfall over the Sahel, south of the Sahara in Africa.

Explaining the weakening of the Indian monsoon, the authors say it is probably an effect of the high aerosol concentration over the Indian subcontinent, which masks the heating up of the part of Indian Ocean close to the land mass. In other words, the northern Indian Ocean is not warming up as quickly as the rest of it. This causes low pressure areas to move away from the subcontinent, weakening monsoon-laden winds and causing drought conditions that could affect more than two billion people in south Asia.

The scientists warn of a possible reverse effect (more rainfall as well): "Greenhouse gases by themselves lead to large positive anomalies in the simulated Indian rainfall, which leads to the speculation that, when the South Asian aerosol pollution is cut down significantly, India may witness a large increase (10-20 per cent) in monsoon rainfall, but this is also related to a large surface warming due to the greenhouse gases." The scientists say that some years the aerosol effect may dominate, while sometimes it may be the greenhouse effect. "So we are concerned that in coming decades the variability between the two will become large and it will be difficult to cope with rapid changes from year to year," says Ramanathan.

Some experts disagree. "This is a study using a climate model. I have serious reservations about making any conclusions from a climate model study, that too, on a cloudy issue. These models are well known for not even simulating mean Indian monsoon rainfall realistically. Therefore, this study is academic," says M Rajeevan of the India Meteorological Department, Pune.