Air to lung to DNA 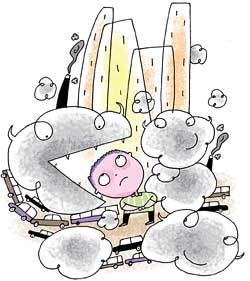 THE air you breathe in may affect your health in more ways than you think. Besides causing respiratory disorders and hypertension, pollution may be damaging genes and changing human behaviour, revealed a study on health of urban population in Delhi and rural population West Bengal and Uttarakhand.

The Central Pollution Control Board (cpcb) sponsored the study that links the pollutant, pm 10 (particulate matter smaller than 10 microns), to these illnesses. The central regulatory authority recently prescribed stricter norms for a number of air toxins and pollutants but omitted revision of the standard for pm 10.

"We have focused on physical and mental health of minors and adults exposed to air pollution," said Manas Ranjan Ray, head of the experimental haematology department of Chittaranjan National Cancer Institute (cnci) based in Kolkata and the key researcher. The group compared the health of 11,628 schoolchildren and 6,005 adults living in Delhi for more than 10 years to that of 4,536 schoolchildren and 1,046 adults in rural West Bengal and Uttarakhand.

"The study establishes the clinical link between respiratory problems and urbanization," said Randeep Guleria, professor of medicine, aiims. He added that doctors have been observing a spiral in chronic diseases like allergic rhinitis, asthma, chronic bronchitis and coronary diseases.


The researchers found that the lungs of people living in Delhi were not functioning well-- 43.5 per cent children and 40.3 per cent of adults showed lung function deficit. People living in rural areas were better off as only 25.7 per cent children and 20.1 per cent adults were found suffering from lung function deficit. The poor were found more vulnerable. Street vendors and drivers were the worst affected. Residents of South Delhi fared better and had lower incidence of respiratory diseases compared to those living in North, Central and West Delhi. Though South Delhi has more vehicles, air quality in the area was better as industries did not add to the pollution.

The effect of the pollutants on dna was determined by studying the epithelial cells of mouth and throat. Non-smokers in Delhi had 2.3 times more micronuclei or mn compared to non-smokers in rural West Bengal and Uttarakhand. mn is indicative of damage to cell chromosomes and is usually found in smokers. The study correlated pm 10 with mn formation in epithelial cells and dna damage in lymphocytes.

Sputum examination of people in Delhi showed large number of white blood cells, neutrophils, eosinophils and lymphocytes. These indicated pulmonary infection, inflammation, allergy and hypersensitivity. The sputum samples also showed greater risk of damage to the bronchial and alveolar walls that could lead to emphysema or swelling of the alveolar sacs along and bronchitis. The researchers also studied the impact of long-term exposure to air pollution on human behaviour. They found that children from medium and low-income families had higher incidence of attention deficit disorder. Rich children were prone to high blood pressure.


The study recommended stricter air pollution norms. "Potential health impact on children should be the main criterion for setting up standards for an air pollutant or establishing an industry in a locality," Ray said. "Introduction of public transport fuelled by cng has improved Delhi's air quality. But pollution levels are still higher than the prescribed standards; the increase in vehicular population is diluting the benefits of cng use," added Ray.

Guleria emphasized the need to highlight the increase in prevalence of respiratory problems in children. "Exposure to pollution not only affects their quality of life but has long-term health implications," he said. He suggested that stricter controls and monitoring of air pollution is the only way to improve quality of air and health.