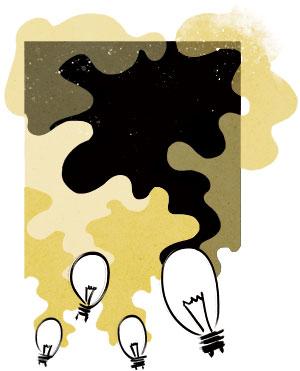 When was the last time you looked up at the night sky and marvelled at the wondrous caravan of countless celestial objects winking at you from the deep recesses of space and time? At the Milky Way, the galactic stardust of which our planet is a part, or the Betelgeuse, one of the brightest stars visible to the naked eye, or for that matter moons of Jupiter and rings of Saturn? To be sure, when it comes to the heavens, most of us, especially the urbankind, are proverbial frogs in a well (except perhaps vicariously when we seek omens in its mysterious movements). But even for the astronomically curious, the modern city lights have become so dazzling and ubiquitous that there are very few spaces of sheer darkness left from where one could enjoy an unfiltered view of the night sky.

The story goes that in 1994, when an earthquake in the wee hours cut off power to most of Los Angeles, some people reported the spooky appearance of a “strange sky”—they were actually looking at stars!

Scientists refer to it as light pollution, and it is captured most tellingly in satellite images of Earth. According to a recent study published in Science Advances, satellite shots taken every October between 2012 and 2016 show that the world is not only getting warmer but also brighter. The US especially is so flushed in this artificial glow that children growing up there now may never see the Milky Way. The story in western Europe is not much different either.

Lighting is colonising the rest of the world too at a brisk pace. Indeed, according to the study, most of the growth in lighting came from developing countries—Africa still has large patches of darkness while India and China appear flood-lit. This is in line with earlier studies that suggest that lighting grows with rising GDP. So, the world is set to get even brighter in the times to come.

Curiously, while satellite images show that developed countries like the US have reached a saturation point, authors of the study point out that the brightness might well be increasing as the satellite used in the study cannot pick up the blue light of light-emitting diodes (LEDs), which are rapidly replacing the old sodium lamps because they consume less energy and last longer, and hence contribute less to the carbon budget. One can see them sprouting almost everywhere in big cities now—in parks, at homes, on streets and across stadia and malls, among other spaces. This is yet another illustration of Jevon’s paradox, which states that, contrary to common sense, doing more with less does not necessarily lead to parsimony.

But what if we are denied the beauty of the Milky Way? Isn’t that, as many argue, a small, indeed some may argue even fair, price to pay for progress, and which makes our urban spaces safe from crime to boot? (Incidentally, a 1997 study by the US National Institute of Justice did not find a strong correlation between crime rates and lighting at night. So this claim remains contentious). On the face of it, light pollution may not seem as hazardous as air pollution, but it can play havoc with age-old rhythms of life—for instance, of sleep, procreation, metabolism, migration and foraging—that have evolved over millions of years in harmony with natural cycles of light and darkness. For instance, a recent study published in the journal Nature reveals that artificial light drove nocturnal pollinators away from plants. Another British study found that trees bathed in artificial light burst their buds earlier. Likewise, many studies have documented how artificial light acts as false beacon or deadly siren for many species of insects, migratory birds, nocturnal creatures like bats and owls, as well as for a host of marine life. As for its impact on plants, we haven’t even scratched the surface.

Forget about other forms of life, for they are convenient scapegoats for modern civilisation’s crimes agai nst ecology. We are not even willing to come to terms with how light pollution might be disrupting the lives of our own species. It’s common lore now that our wanton flirtation with the day-night cycle is behind the epidemic of insomnia afflicting the world. Besides, a growing body of evidence suggests that light pollution may be linked to cancer, obesity, depression and dementia.

And yet we continue to transgress the natural line between light and darkness through artificial lighting, not just through electric lights but now through our addiction to laptops and smartphones. Indeed, last year’s Nobel Prize in physiology was conferred on three US scientists for unravelling the complex links between circadian rhythm (in other words, inner biological clock) and the external environment. Many believe this should be a wake-up call to reclaim and revive the forgotten darkness in our lives.

Fascination with darkness, especially its connection with sleep, has a much older vintage. The ancient Indian text called the Mandukya Upanishad talks about a state of consciousness called turiya (fourth state) that occurs only in deep darkness of the midnight hour, and transcends the other three—waking, dreaming and dreamless sleep. Other cultures too refer to something similar—Tahajjud or the Night Prayer in Islam, and Tikkun Chatzot or the Midnight Repair in Judaism, which, however, has become very rare, thanks to the encroachment of darkness by the ubiquitous electric lamp.

But darkness also inspired fear, so humans learnt to pierce it with fire long before (about 250,000 years ago) Edison’s famous invention. In fact, in his book Catching Fire, Harvard anthropologist Richard Wrangham argues that gathering and feasting around fire with others is what made us human. As time went on, human ingenuity devised ever-more efficient ways to encroach upon darkness, from wax candles, oil lamps and gaslights to eventually the electric bulbs, which have colonised almost all parts of the globe today. More than 60 per cent of the world, and close to 99 per cent of the US and Europe, now lives under a sepia sky tainted with light.

But how does one resist this mass illumination so that we can experience not only the cosmic experience of the night sky but also the primeval pleasure of deep sleep? It would be foolish to go around smashing electric lamps, as the Parisians did with the lanterns in the 18th century—mourn as we may the loss of darkness, the truth is we cannot do without lighting.

Nevertheless, we can at least take the edge off it by making it less harsh and less pervasive. For a start, as the world switches to energy-efficient LEDs, we should opt for the much softer red or orange glow instead of the blue, which stymies melatonin, the sleep-inducing chemical. Second, go dark for several hours at night, as some cities like Chicago and Paris have been doing over the past few years. Third, go for shaded lamps instead of the open or sky-facing ones that pollute more. Lastly, as much as you can, avoid using laptops or smartphones a couple of hours before going to sleep.

As Paul Bogard wonders in his illuminating The End of Night, “while light at night is welcome, can there be such a thing as too much? In doing away with darkness, what beauty do we lose?” A couplet on the electric lamp by the irrepressible 19th century Urdu shayar Akbar Allahabadi may throw some light on the matter:

A thought-provoking poser indeed. But how about sleeping on it in the deeply pleasurable shadows of the night?

(This article was first published in the 16-31 January issue of Down To Earth, under the headline, 'The death of darkness').