The last week of March 2020, ending March 29, was one of the cleanest in Delhi in the past few years, a Centre for Science and Environment (CSE) analysis has found.

Particulate matter (PM) 2.5 levels continued to slide after the nationwide lockdown in the wake of the novel coronavirus disease (COVID-19) outbreak kicked in on March 23, the analysis found.

CSE’s comparison of weekly pollution over time did not include the monsoon months of July, August and September as heavy monsoon rains deeply wash out pollution.

Normally, the cleanest week outside monsoon is recorded during June, when there are ample pre-monsoon showers.

Even though meteorological conditions influence pollution levels in other months as well, CSE’s comparison is only indicative.

This is the first time since 2016 that March in spring has recorded the lowest levels. The last week of March 2020 was 26 per cent cleaner than the cleanest week recorded in 2019 (week ending June 26, 2019). The daily PM2.5 levels during this week have been well below the 24-hour standards.

Spring is the time of the year when winter smog thins out in the national capital. But spring pollution normally does not dip to the levels that have just been experienced during the month of March. Crisper, breathable air and bluer sky are a testimony to this change.

This prompted CSE to do a rapid and indicative analysis of the daily and weekly trend in PM2.5 levels during locked down March and how it compared with March of preceding years since 2016.

The lockdown, a massive experiment, even though for unintended reasons, has given monitoring agencies a chance to understand how low the pollution can drop during this season.

How can action be calibrated to sustain this change in air quality when the economy bounces back after the pandemic?

This only indicates how disruptive, ambitious and scalable the next level of multi-sector action will have to be to sustain this air quality. 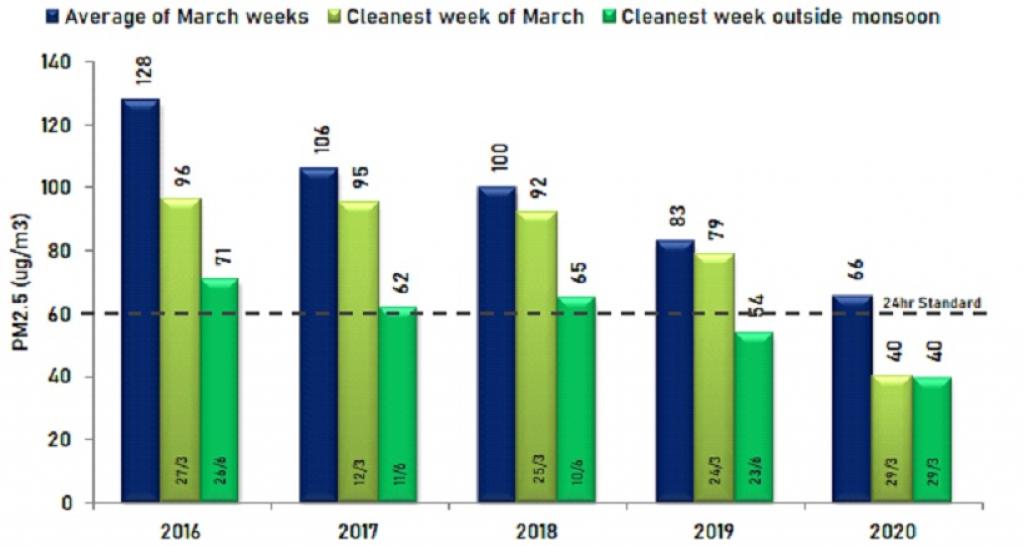 Note: A week is described by the end date of that week.

Source: Centre for Science and Environment analysis based on realtime data from Central Pollution Control Board