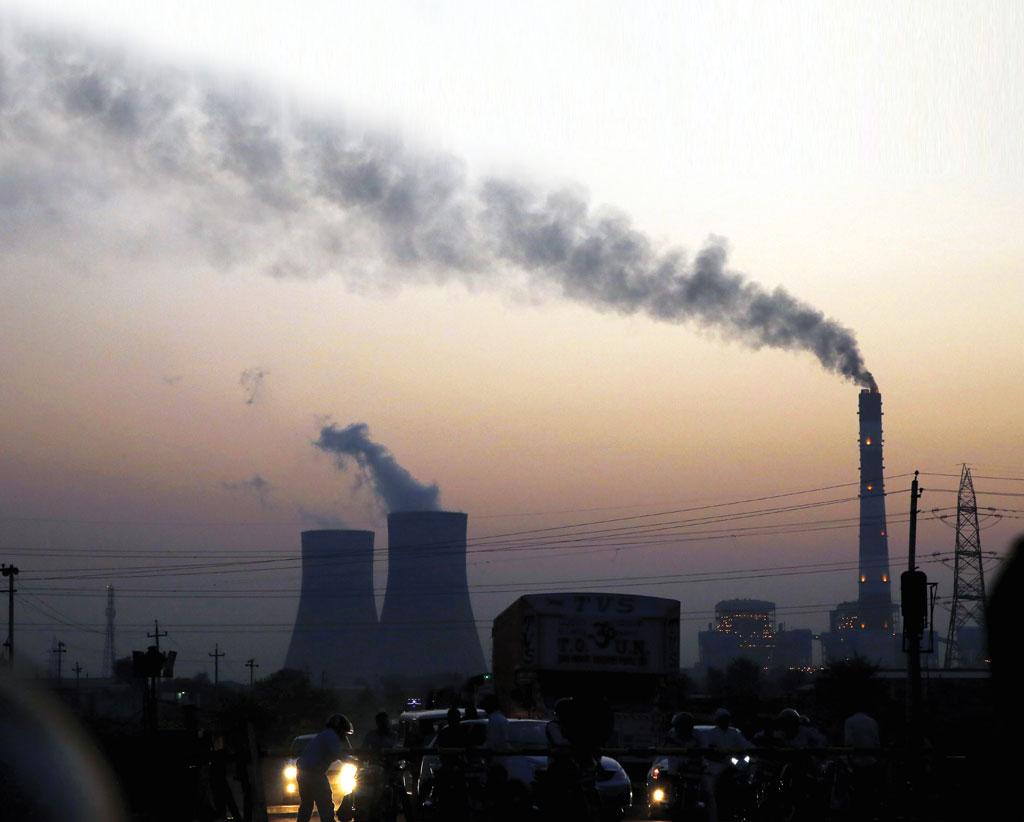 Six months after the government of India issued a set of strict regulations for coal-based power plants and 18 months before they come into force, there is no clarity on how, or if, they will get implemented in time. The regulations, published on December 7, 2015, become effective from December 7, 2017. They aim to drastically cut air pollutants such as particulate matter (PM), sulphur dioxide (SO2) and oxides of nitrogen (NOx), and reduce extraction and use of fresh water. But the operators, who would need to upgrade plants and install new pollution control technologies, do not appear to be taking steps to comply with the new norms. While some of them hope the regulations will be watered down, others are pushing to have the implementation date postponed.

The impact of coal-based thermal power industry on air is disproportionately high. In India it is responsible for over 60 per cent of PM, 45 per cent of SO2, 30 per cent of NOx and more than 80 per cent of mercury emissions of the industrial sector. But as per the current regulations, the plants need to keep only the PM levels under check (see ‘Overdue reforms’). There are no national emission standards for SO2, NOx and mercury. A 2015 study, “Heat on Power”, by Delhi-based think tank Centre for Science and Environment (CSE), found that almost two-thirds of thermal power plants in India were not complying with PM emission standards, which are much more lenient than the norms in the European Union, China and the US.

The new standards categorise power plants into three groups—units that have been in operation before 2003, those installed between 2004 and 2016, and the ones that will be commissioned after 2016. The standards are based on a range of factors, including the age of plant, technology used (which determines what upgradation and retrofitting is appropriate) and the regulations and environmental clearances that were in force when the plant was commissioned. “The categorisation was basically done considering all aspects, including availability of technology and achievability,” says S K Palliwal, senior scientist at the Central Pollution Control Board (CPCB), who was instrumental in developing the new standards. 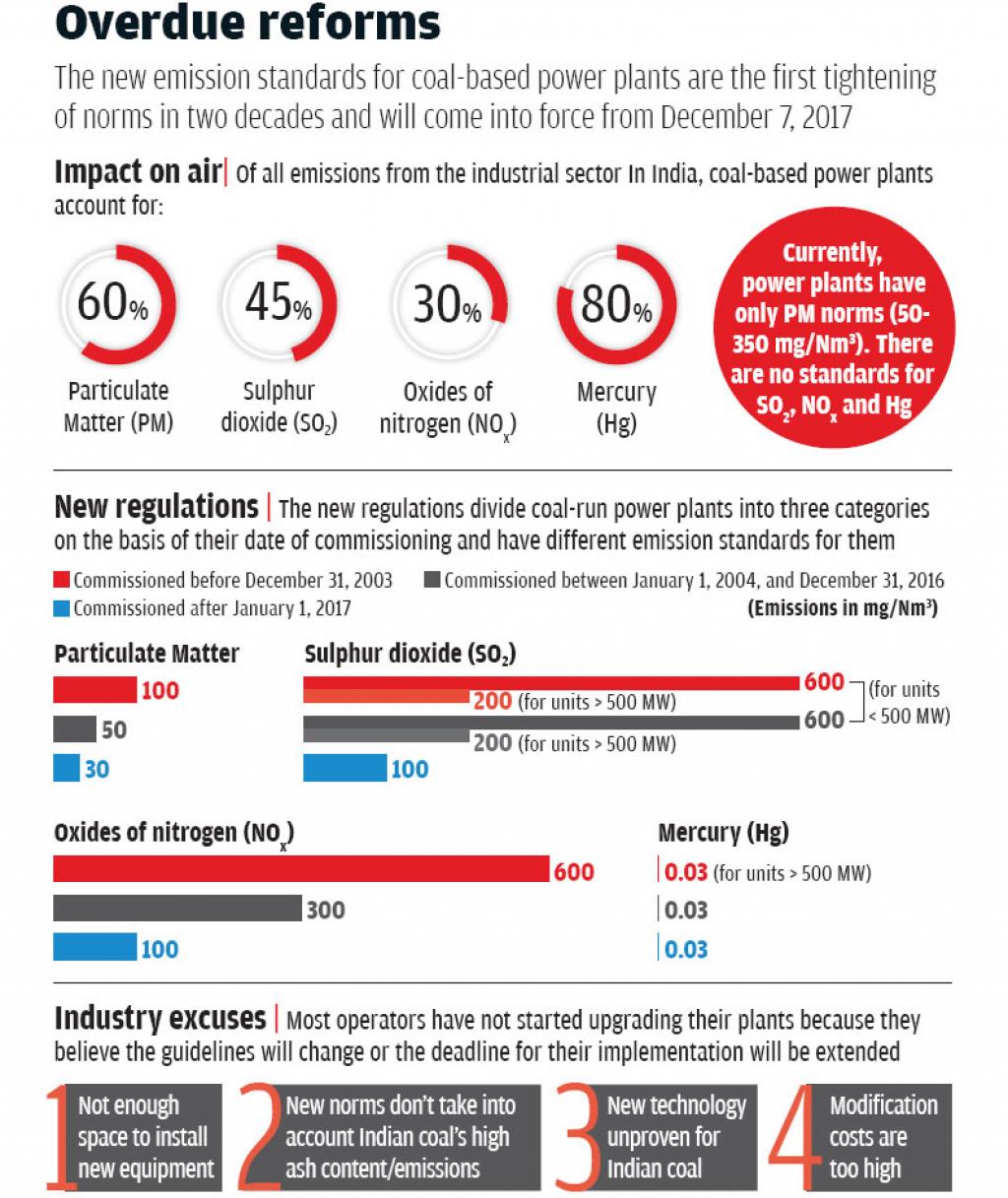 But the signs so far are not encouraging. An informal survey by CSE shows that many companies have little idea about the equipment needed by their plants to meet the new standards and are in early stages of hiring consultants or asking manufacturers for clarifications on how to undertake the process. Moreover, some projects are still moving ahead as per old plans and will require expensive modification later. Mahesh Kumar Agarwal, chief engineer, Suratgarh thermal power plant, Rajas-than Rajya Vidyut Utpadan Nigam Ltd (RRVUNL), says, “We are confident that we will get relaxation and after the installation we will take up the modifications, if necessary. Currently, it is very difficult to make modifications as erection and construction is under process.” The truth, however, is that it is easier to make changes now because the plant is still under construction. M K Mishra, chief engineer-in-charge of installation, Chhabra supercritical station, RRVUNL, also says, “No modifications have been made to the design; FGDs (flue gas desulfurisation equipment, which curbs SO2 emissions) are not being installed. We will commission the plant in September 2016; the modifications for pollution control will be undertaken later if needed.”

A major technical hurdle, argued Association of Power Producers, the industry trade body, in a March 16 letter to the power ministry, is the lack of space in the old units for installing pollution control equipment such as FGD or electrostatic precipitator (ESP), which is used to capture particulate matter. M K Sunder Singh, director-thermal, Andhra Pradesh Power Generation Corporation, says, “We feel we have space constraints as FGD will have to be placed between the chimney and the boiler, but we aren’t sure. We have consulted CEA (Central Electricity Authority) and NTPC (National Thermal Power Corporation) who advised us to approach our equipment supplier, which is BHEL (Bharat Heavy Electricals Ltd). We are awaiting BHEL’s report to take further action.” Same is the case with Haryana Power Generation Corporation Ltd (HPGCL). Ashok Garj, deputy secretary-generation, HPGCL, says, “In all our units, space is a major constraint. We are planning to call our equipment supplier SEPCO Electric Power Construction Corporation from China to understand the feasibility.”

However, there are ways to solve this problem. “Within the existing ESP, more collecting area can be provided by replacing the ESP internals with taller collecting system or replacing the existing ESP fields with bag filters,” says Kamatchi Rajavel, corporate adviser-Mitsubishi Hitachi Power Systems (MHPS), Japan, which advises NTPC on pollution control equipment. Moreover, CPCB officials say that environmental clearances required all units larger than 500 MW and set up after 2003 to leave enough space to install FGD. This should have been followed.

Another criticism levelled by the industry is that the new regulations have been framed disregarding the high ash content and low calorific value of Indian coal. The high emissions by power plants are due to the use of this coal, they say. They also argue that the technology used in pollution control devices is unproven for Indian coal. “There isn’t sufficient data on performance of advanced pollution control technologies using Indian coal,” said Sanjay Sagar, CEO, JSW Energy at a conference on coal held in New Delhi on March 18. Manufacturers of these devices, however, have a different view. “Pollution control technologies are mature and have been shown to achieve these levels in various operating conditions,” counters Alok Jha, general manager, GE Power. Manufacturers are also in discussions to set up pilot plants to demonstrate the success of these technologies. For instance, use of catalytic selective catalytic reduction (SCR) can help in meeting NOx emission standards even with Indian coal.

Another major hurdle, say operators, is the huge investment required to upgrade the plants. Association of Power Producers contends the costs could range between Rs 1.25-1.5 crore per MW. “We need to install FGD and SCR to meet SOx and NOx standard in the new Ennore 660 MW units, which will be commissioned in 2017-18. However, the additional investment needs to be approved by the board. The process is time consuming and tenders have to be finalised. So at this juncture it would be difficult,” says T Balasubramanian, superintending engineer, Tamil Nadu Generation and Distribution Corporation. But manufacturers of pollution control devices are of a different view in this regard as well. They say the costs will be much less—for older units upgradation costs would be between Rs 0.25 -0.7 crore per MW while the for the new plants the figure would be around R1 crore per MW. CSE estimates, based on discussions with industry experts, that total cost for upgrading all existing coal plants may be in the range of Rs 65,000 crore.

Officials at the coal-based power plants, which have been commissioned before 2003, say that the units need costly upgradation to meet new standards and there is little time left to recoup the investment. According to a 2015 report by CEA, approximately 36 GW of India’s 185 GW coal-based power capacity is contributed by plants that are over 25 years old and are considered to have reached the end of their design life. “These plants are both polluting and inefficient and should be shut since upgrading them and installing expensive pollution control equipment may be uneconomical,” says Chandra Bhushan, deputy director general, CSE. Piyush Goyal, minister of power, coal and renewable energy, has asked senior officials to examine options to shut old units or replace them with efficient supercritical plants. For the remaining plants commissioned before 2003 (around 25 GW, estimates CSE), improvements in ESP and modifications in boiler should enable them to meet the new standards.

But not all is lost. A few operators are of the view that they will be ready for the new norms in time. U S Hota, chief engineer, Uttar Pradesh Rajya Vidyut Utpadan Nigam Ltd, says, “All of our plants in pipeline at Hardurganj, Panki, Obra, Parichha, which will come up in next three-four years, will be 100 per cent complaint with the new environmental standard. We recently modified the Hardurganj plant’s contracts with the vendors as it is in the foundation stage.” NTPC too, in a written response to CSE, said, “All new units are installed with high efficiency ESPs which are capable of meeting the new norms for PM. In view of this, we are confident of complying with the stipulated new norms on PM”.

However, a comprehensive strategy is required to make the transition a success. First, the government needs to restructure the state-owned distribution companies that are distressed. Power generators will be able to finance the investments only if their customers—the discoms—are viable. Second, the government should also consider using the coal cess of Rs 400 per tonne levied on all coal buyers to support the investment through soft loans or other financing mechanisms. Third, the tariff regulators need to work with power companies to expedite approval of these investments and build it into tariff changes. CEA and Power Grid Corporation of India need to draw a plan for staggered plant shut downs that would be required during upgradations to avoid disruptions to electricity supply.

China retrofitted over 65 per cent of its 800 GW capacity with devices to curb NOx in five years and over 60 per cent of the capacity with FGD in four years. India too can achieve its goals of cleaning the coal-based power sector, but it would need a concerted and aggressive action plan. India’s looming health and environment problems demand nothing less.