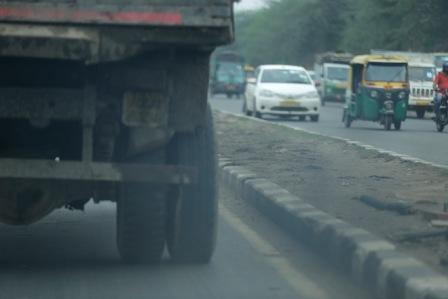 Trucks passing through the national capital have not yet been levied the landmark "green tax" that was agreed upon recently.

In October, the Supreme Court (SC) had imposed an “Environment Compensation Charge” (ECC) of Rs 700 and Rs 1,300 on commercial vehicles entering Delhi, in addition to the toll tax, beginning November 1 for four months on a trial basis, in an attempt to check the notoriously high pollution levels in the city.

But on November 1, the South Delhi Municipal Corporation (SDMC)’s toll contractor (SMYR Consortium LLP) didn’t collect the additional levy at any of the toll booths in Delhi.

The toll operator has cited two reasons for not levying the tax. In a letter to the SDMC on October 30, the concessioner referred to the tax collection as “an impossible task”, given its staff’s field experience. It also cited the issue of the staff’s personal safety at the toll plazas.

In response, the SDMC said non-compliance would be considered as willful defiance of the order and the contractual obligations on part of the contractor and they would be liable for contempt of court in that eventuality.

Following the contractor’s refusal, the SDMC has asked the Delhi government to initiate the talks with it and persuade it to collect the green tax as per the order of the apex court.

In a meeting of the Environment Pollution (Prevention & Control) Authority (EPCA) on October 31, officials of Haryana and Uttar Pradesh had been directed to install billboards at all entry and exit points into and from Delhi by November 10. In the same meeting, the Delhi traffic police presented a map showing alternative routes around Delhi.

There is another EPCA meeting scheduled on November 4 regarding the non-collection of the green tax by the toll collector.

According to the EPCA’s report on trucks entering Delhi, submitted in the SC by its amicus curiae Harish Salve, light and heavy duty vehicles alone are responsible for 30 per cent of Delhi’s air pollution.