Join the dots for clean air

Delhi’s air pollution crisis has an urgent message: India must have a regional plan to fight the menace 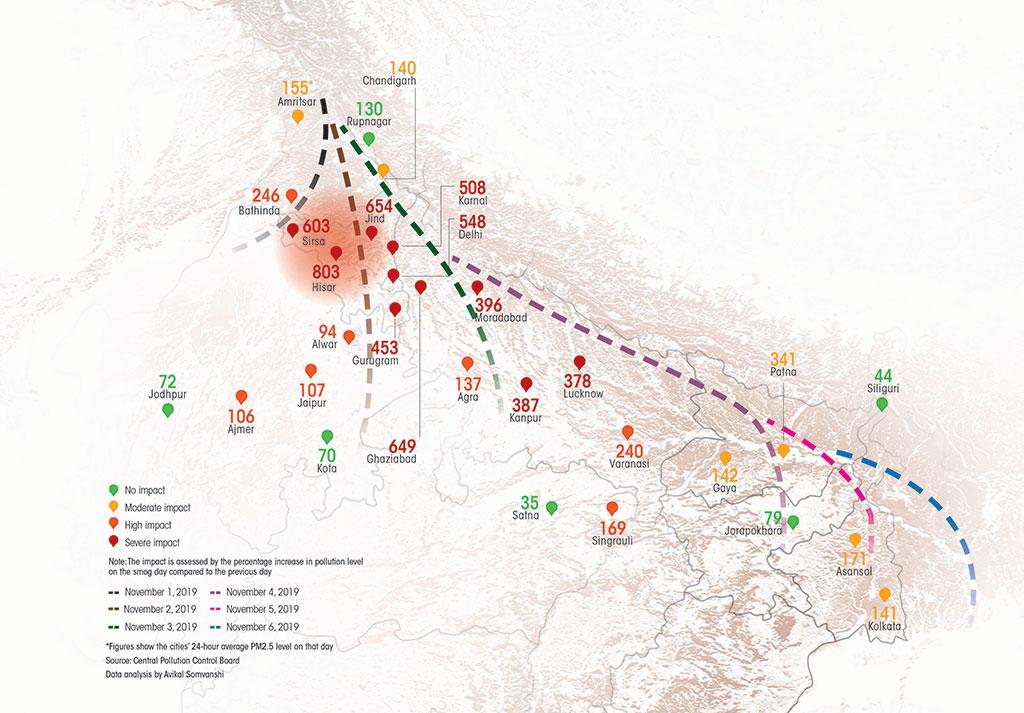 After the Supreme Court took the governments of Punjab, Haryana, Delhi and Uttar Pradesh to task for not being able to control the life threatening pollution in the combined region, the issue of harmonised but effective regional pollution control action has drawn attention.

As the Indo-Gangetic Plain turns dark red on the Indian map with wintery weather trapping dangerous levels of air pollution, Delhi typically hogs attention as the epicentre of the problem.

But this story is not about Delhi. It is about the vulnerability of vast landlocked region of northern India that raises the question regarding the need for a regulatory framework to control transboundary effects of regional flow of pollutants across the states of India. Is there a blueprint for this?

Satellite images and emerging scientific evidences prove movement of pollution across airshed. The recent smog episode at the onset of winter in November, has shown rapid build-up and shifts in peak pollution across the Indo-Gangetic Plains within a short span of time.

Just not the big cities but also the tiny towns like Sirsa, Jind and Karnal in the region have recorded levels even higher than the bigger cities. Between November 1 and 5, peak pollution proliferated and migrated eastward. When the entire region is covered in a blanket of smog, small urban specs of human settlements cannot remain insular.

This raises a larger question. The National Clean Air Programme (NCAP) has identified 129 cities that do not comply with the particulate standards. NCAP is actually designed to mitigate pollution hotspots. But most of the hotspots are small towns within a larger airshed. Several of them are tiny urban centres with a lot less than 0.5 million population.

Local action can certainly reduce local exposure. But if the larger influence area of these small towns within the airshed is neglected, local pollution can remain obstinate. In Uttar Pradesh, Anpara has less than 18,000 population, Gajraula about 55,045 and Rae Bareilley about 0.19 million. Similarly, Gaya and Muzaffarpur in Bihar have less than 0.5 million population.

While reducing local exposure is important, scalable action in the airshed also becomes necessary for overall improvement in air quality.

Airshed is a vast mix of multiple state jurisdictions and governance systems. But there is no clear mechanism for creating a common framework of action, monitoring and compliance for coordinated and harmonised action across multiple jurisdictions across states. Traditional legal approach remains confined within the boundaries of state, city and municipal areas.

This has to change to include much broader scope of geographical coverage and pollution source coverage while defining air pollution control areas or critically polluted area within the ambit of the Air Act, 1986. This is needed to strengthen the governance framework and inter-state cooperation to tackle the persistent air pollution crisis.

Globally, governments are seeking answers to this challenge. The matter is high in global agenda. At the international level, inter-governmental treaties and agreements on transboundary air pollution, like the Convention on Long-Range Transboundary Air Pollution, are well known. These are international agreements that are based on non‐binding, enabling and flexible mechanism.

But increasingly, European states within the European Union have begun to explore the regulatory means of building regional action across different jurisdictions.

China, however, has taken the lead to work out a more flexible regional approach and a regulatory and monitoring framework. In order to address the pollution crisis in Beijing, the Chinese government has adopted the approach of unified planning, unified monitoring and alerting, and unified standards in multiple contiguous regions.

In 2017, a combined work plan was adopted for Beijing, Tianjin, Hebei, Shanxi, Shandong and Henan. This demanded the so-called “2 + 26” cities to decrease average PM 2.5 concentrations and the number of heavy-pollution days by more than 15 per cent from the previous year.This combined region also revised the emergency response plan for heavy pollution to unify the alerts and grading for heavy air pollution and the emission reduction ratios for each alerting level.

Violations of the Action Plan are addressed and redressed across these regions. They have also reformed the vertical management and accountability systems for monitoring, inspection and law enforce-ment of the environmental protection agencies.

Given the magnitude of the regional air pollution crisis in India, the time has come for a framework of regional cooperation based on mutually agreed action plan including targets with adequate resource support.

It is time to make this change in traditional laws and adopt new governance approach to allow wider and more effective participation of state governments for harmonised regional action.