Hawa Badlo will be available to the public on IOS and Android phones. The launch is part of the winter action campaign against Delhi's pollution 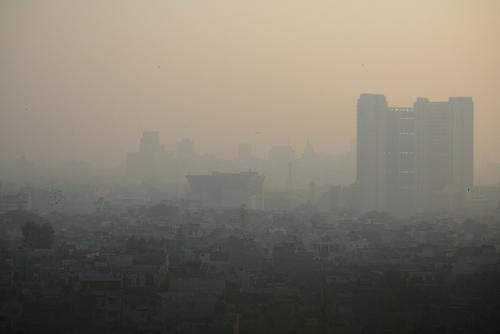 Though winter is yet to set in, the national capital is suffering from poor air quality as reported by the media recently. According to the Central Pollution Control Board (CPCB), air pollution level in the city has gone up since the monsoon.

To tackle the menace of air pollution, bring in more accountability in the public domain and disseminate information, the Environment Protection Control Authority (EPCA) for the National Capital Region (NCR), along with municipal corporations and the governments of Delhi, Haryana and Uttar Pradesh, has prepared a mobile application, Hawa Badlo, to follow up public complaints on air pollution.

The EPCA monitors the progress of government action taken in reducing incidents of crop burning, controlling dust flow from unpaved roads and building construction activity. Within a short span of five days, the app has got 1615 active users and 164 complaints have been received till October 27.

"Most complaints coming to the hawa badlo app are related to waste burning. What is the government doing about it?" asked Anumita Roy Chowdhury, head of Centre for Science and Environment (CSE's) clean air campaign.

The app was launched on October 21 as part of the winter action campaign against air pollution.

The users of Android phones can download app here.

It will enable people to record instances of violation, according to the Supreme Court directive given last year against air pollution. Users can report violation cases, which would then be screened for veracity, by a team of administrators and forwarded to officials concerned for taking necessary action.

Users reporting violation cases will be kept in the feedback loop till a particular case is concluded. Cases will be marked as concluded on the user’s app only on admission of proof of action taken. The user will get a report of the action taken and a record will be created in a particular area. This will help in creating a database of repeat offenders, thus deterring violation activities in future.

Air pollution level increases in the winter due to paddy residue burning in Punjab, Haryana and Uttar Pradesh. The presence of particulate matter (PM) in the air is the major reason for Delhi’s dirty air.

In 2015, a report done by the Indian Institute of Technology, Kanpur, found that the primary pollutants affecting Delhi’s air are PM 10 and PM 2.5. Vehicular emission, crop residue burning and construction activity are to be blamed for this.

The study reported that nearly 56 per cent of PM10 and 38 per cent of PM2.5 in the air was due to road dust while crop residue burning contributed 26 per cent to the overall air pollution level.

PM2.5 can easily penetrate into lungs, causing cardiovascular problems and damage to the inner walls of the arteries. Young and old people and those employed in hazardous occupations are most vulnerable.

To tackle pollution in Delhi and NCR, the National Green Tribunal, in its 2015 order in the Sanjay Kulshreshta vs Union of India case, directed the state government, CPCB and the Delhi Pollution Control Committee to ban garbage burning, prevent dust flow at construction sites, take requisite action to repair pavements and reduce dust on the roads.

Burning garbage now invites a penalty of Rs 5,000 to Rs 1 lakh per case while non-compliance with the norms relating to construction activity is fined Rs 50,000 per incident.

Violations during carriage and transportation of construction materials and debris through trucks and other vehicle attract a penalty of Rs 5,000 per incident.

While in the past various agencies had introduced social media campaigns to raise awareness about air pollution, these were largely ineffective. An example can be given of Faridabad, which conducted extensive awareness campaigns. It also runs a Whatsapp-based violation reporting system, but has not issued a single challan till April 2016.

Similarly, the Delhi government also runs a mobile app to report waste burning cases. The app has 50,000 downloads. But while 1,027 complaints have been lodged through these applications, no action has been reported from the agencies concerned.

Sources said though government agencies are flooded with complaints, resource crunch stands in the way. The new app will clearly define a chain of action from the pollution control boards to the municipal authorities.