A survey released by Delhi-based non-profit, Centre for Science and Environment (CSE), shows that the entry of a large number of trucks in the national capital adds on to the city's air pollution level.

The non-profit has also welcomed the Supreme Court's intervention into the matter in response to an application filed by Amicus Curiae Harish Salve. Based on the CSE findings and the recommendations of the Environment Pollution (Prevention and Control) Authority, Salve has sought immediate measures to control the entry of trucks before winter pollution brings in its wake health hazards.

Speaking to the media on the occasion of the release, CSE director general Sunita Narain said, “Without the right numbers and more varied strategies, official action to control truck pollution has remained and will remain weak and ineffective.”

CSE Executive Director Anumita Roychowdhury, who also heads the air pollution control campaign, said, “The study has become necessary as it is clear that Delhi cannot fight its pollution battle without addressing the enormous pollution contributed by trucks crossing its borders daily.”

“The delay in building the two expressways has cost the city dear in terms of pollution. But given the coming winter and the increase in pollution, we need to find urgent options. While immediate steps are needed to complete the two expressways—western and eastern—as directed by the Supreme Court over a decade ago, it is possible to take additional steps in the short term to reduce pollution load from trucks before this winter. Delhi has now got the dubious distinction of being the most polluted city in India and perhaps even the world. This is putting a huge health burden on its people.”

Details about the study

As part of the survey, CSE roped in M/s V R Techniche Consultants Pvt Ltd to accurately estimate the number of commercial vehicles entering and leaving Delhi at all key toll points. It was done to get an independent estimate and verify the municipality data, which underestimated the number of trucks entering the city.

Video recording was used to carry out a survey on the actual traffic count 24x7 at fixed spots near selected entry points between June 29 and July 18, 2015. All categories of trucks and commercial vehicles that feature in the municipal database were counted.

Nine representative entry points were chosen for the survey. According to the MCD, all these points account for close to 75 per cent of the total commercial vehicle entry into Delhi. 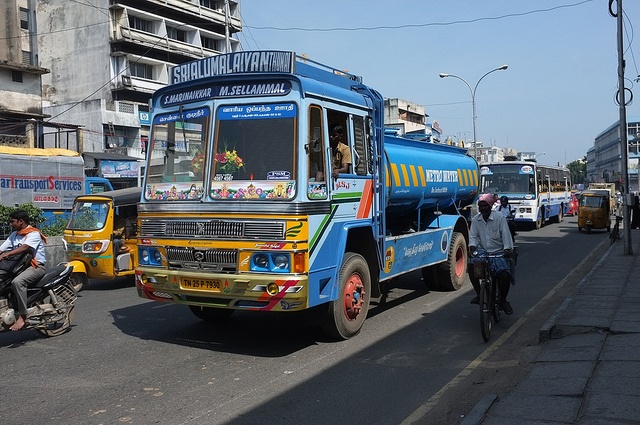 The daily average number of light as well as heavy goods vehicles that enter and exit from all these nine points stand at 85,799. The total number of commercial light and heavy duty trucks entering and leaving the city is 115,945 each day.

According to the Municipal Corporation of Delhi (MCD) data, on an average 22,628 commercial vehicles (excluding taxis), enter Delhi every day from these nine entry points, as against the 38,588 commercial vehicles counted by the CSE survey. The former figure, which is almost 16,000 vehicles less than the CSE study, is an underestimation of about 70 per cent in the number of trucks entering the capital.

“This is clearly a massive loading of toxic pollution. Without any restraint on the movement of these trucks, Delhi’s battle against toxic pollution cannot be won. Though light goods vehicles are 49 per cent of all commercial vehicles, the relative contribution of heavy trucks is much higher,” said Narain.

The CSE survey includes information on the time of entry of all commercial vehicles into the city. When the movement of vehicles is correlated with the pollution data, a clear trend emerges. The pollution is the highest in the city during the time when there is a movement of heavy as well as light trucks. While trends are more variable during summer night time, the level of pollution increases during winters.

The MCD data shows that the percentage of trucks turned back, in compliance with the order of the Supreme Court, is a mere 0.3 per cent of the total traffic.

Conducting a travel destination study has a huge drawback, as drivers often do not provide accurate or correct information. A rapid diagnostic survey was carried out in 2014 only on the roads approaching NH-1 and NH-10 to Delhi.

During the study, truck drivers were randomly surveyed and asked about their origin and destination and the commodities in their vehicles. This rapid and limited survey found that around 23 per cent of all commercial vehicles travelling on NH-1 were not destined for Delhi.

In the same survey, it was found that 40 to 60 per cent of heavy trucks (three-axle and those above) were not destined for the city. But it also became clear that it is not possible to distinguish between such vehicles and a strategy must be designed so that all light and heavy-duty trucks are duly covered.

Another shocking fact has been revealed by CSE. It has come to light that while there are viable options available to bypass commercial traffic, these roads are not favoured by transporters. There are alternative highways that exist on the western side of the city to transport goods to north India as well as west and south.

However, truckers prefer to traverse through Delhi and not take these alternative highway roads despite the fact that there is no apparent and real difference in length.

The key reason behind not taking these routes is that it is cheaper to travel through Delhi than to take alternative roads. The reason for this choice of route is that these roads are all toll roads and charge according to the rates as decided by the National Highways Authority of India (NHAI). The road that cuts through Delhi has a lower charge that is based on rates decided by the MCD.

For instance, NH-71 and NH-71A are toll roads that connect Rewari via Jhajjar and Rohtak to Panipat. This means that commercial vehicles, which is travelling from north India to west via Jaipur and then to south India, can take this route. It will not need to travel through Delhi. But the toll rate for three-axle trucks to travel on this road is Rs 1,420. If the truck travels through Delhi, it is required to pay the MCD toll, which for a three-axle truck, is only Rs 450.

The length of the trip is not much different – while travelling via NH-71 and NH-71A it is 172 km. Travelling through Delhi is marginally shorter with 163 km. It is also clear that travelling to the east of India—from north to east via Agra, there are fewer ready highways that can obviate the need to traverse through Delhi.

“Travelling through Delhi needs to be charged so that there is a clear disincentive for the use of these roads, the cost of pollution is paid for and there is an incentive for viable options to be built that do not require going through the already congested and polluted airshed of Delhi,” Roychowdhury added.

“Imposing this charge will reduce the (number of vehicles) that have options not to travel through Delhi immediately. It will also create conditions for traffic that is not destined for the city, to look for alternative routes,” she said.

CSE welcomes the fact that key urgent measures that can make a difference in the short term have been taken on board and recommended to the Supreme Court by Salve and the EPCA.

There should be an implementation of a pollution compensatory charge on all light and heavy-duty trucks entering Delhi as an additional charge to the MCD toll. This should be done to equalise the difference between toll roads and travel through Delhi. Taxis are being exempted as they provide options for public travel. Similarly, in category two buses should also be exempted as there is a need to make this travel cheaper and viable to take away from private car travel.

There is also a need to implement Radio-Frequency Identification (RFID) on trucks. The RFID scheme will enable electronic payment and track them electronically as they pass through the toll booths. This will help to identify non-destined trucks with greater precision and make management easier. The highways authority has directed a nationwide roll out of RFID for commercial vehicles, but the implementation is slow.

This can be easily implemented in Delhi, as technology is available and relatively cheaper to install on every truck. The contract given by the MCD to the private operator includes the provision to move towards RFID, but no deadline has been given. Clearly, there is no incentive for the operator to move towards RFID, which would reduce the dealings in cash considerably.

There is also a need to introduce Bharat Stage IV emissions standards across India by April 2016. Emission levels from trucks cannot be lowered effectively if they continue to run on outdated technology and highly polluting fuel.

The current Bharat Stage III standards that apply to trucks across the country are 15 years behind European standards. As trucks have a 15-year life, any delay in bringing in better technology or fuel, means more polluting on-road vehicles. Cleaner fuel is also required nationwide as trucks travel long distances. The current draft standards issued by the Ministry of Surface Transport and Highways require inter-state (truck) traffic to move to Bharat Stage IV only in April 2017. This delay is, however, unacceptable.