CSE’s analysis shows a ten-fold jump in PM2.5 on Diwali evening due to bursting of firecrackers

Analysis of real time air quality data for Delhi and the towns in the National Capital Region (NCR) — including Gurugram, Faridabad, Noida and Ghaziabad — shows how the Diwali night has ushered in the season’s first severe pollution peak due to the bursting of firecrackers. This has undone the comparatively cleaner trend witnessed so far in the September 15 to October 27 period. Post Diwali day has plunged to severe category. Urgent action s needed to ensure that this does not deteriorate further to become a prolonged smog episode.

Ghaziabad has become the first among its peers in the region to have experienced the season’s first 24-hour average severe pollution on the day of Diwali. The air in the other cities and towns is also expected to follow suit post Diwali. We have analysed the Central Pollution Control Board’s (CPCB) real time data on PM 2.5 concentrations to assess three things -- the trend during Diwali, the weekly trend before Diwali, and the overall trend since September 15. Efforts have also been made the levels between the 2019 and 2018 Diwali days. It may be noted that in 2018, Diwali had occurred on November 7 -- 10 days later than this year in the season, and it was colder. This analysis has also taken into account the trends in wind speed.

While harsher winter conditions are yet to set in and the weather during the period of analysis (September 15 to October 27) has remained relatively favourable (including a delayed monsoon), several ongoing systemic actions and preventive emergency measures had also contributed to prevent an early onset of very poor and severe pollution in Delhi-NCR. The scenario has changed on Diwali night.

Peak Diwali pollution in 2019 somewhat similar to the 2018 Diwali peak – but dissipates faster: From a very clean afternoon, the change to severe pollution levels after 10 pm at night was drastic. There was a 10-fold jump in PM 2.5 concentrations between 5 pm and 1 am due to bursting of firecrackers. The peak level during 1 am to 3 am was quite similar to the peak levels observed in 2018 during Diwali. This was a warmer and windier Diwali than 2018. However, during 2018, the peak pollution continued until 8 am, whereas this year, the peak showed a sharper fall after 3 am. 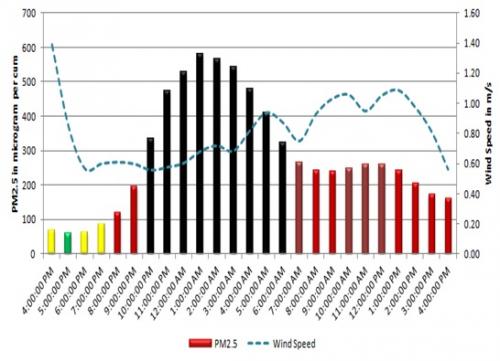 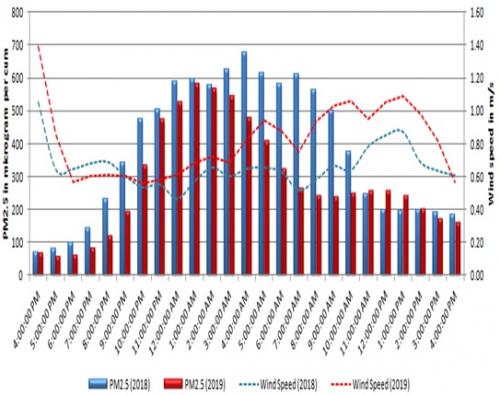 Weekly trends in PM 2.5 levels – in 2019, air was much cleaner before Diwali compared to that in 2018; this shows the overwhelming role of firecrackers in building the severe peak on Diwali night: It may be noted that this year, there were no severe pollution days during the week preceding Diwali. In 2018, the region had already experienced a couple of days of severe pollution, with many more days in the ‘very poor’ category. This year, only Ghaziabad has experienced the season’s first 24-hour average severe pollution on Diwali day. However, there is early indication that air quality in the post-Diwali days could deteriorate to ‘severe’ category.

Moreover, the onset of ‘poor’ and ‘very poor’ days has been delayed this winter. These have started to occur only after October 10. But during 2018, there were more such days, largely starting as early as September 26. Nearly all cities and towns had experienced severe pollution days even before Diwali (October 30, almost a week before Diwali). 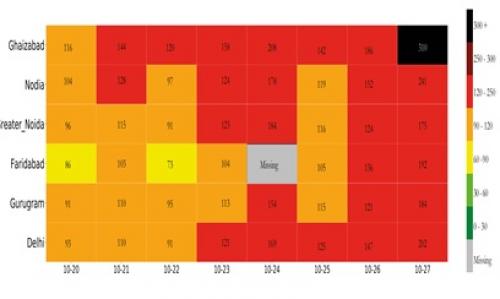 Favourable weather and action together have tamed 2019 winter pollution: It is important to note that overall pollution levels are comparatively lower in Delhi and NCR towns since September 15. While favourable weather conditions have contributed to this trend, the role of ongoing action and emergency interventions have also been important. This has prevented build-up of pollution to ‘very poor’ and ‘severe’ levels before Diwali and has also enabled quicker dissipation of pollution post-Diwali (as observed so far – until 4 pm today).

It is more important to note that during 2019, there have been days with wind speeds lower than in 2018, and yet pollution has not exceeded 2018 levels. Even on days with better wind conditions in 2018 leading to Diwali, the pollution level was higher compared to in 2019 – this shows that the overall pollution load in the city in 2018 must have been higher.

2018: Overall, there were more poor and very poor days during the later part of September and early October – largely starting after September 26. Nearly all the cities and towns had experienced severe pollution days even before Diwali (October 30 – almost a week before Diwali). 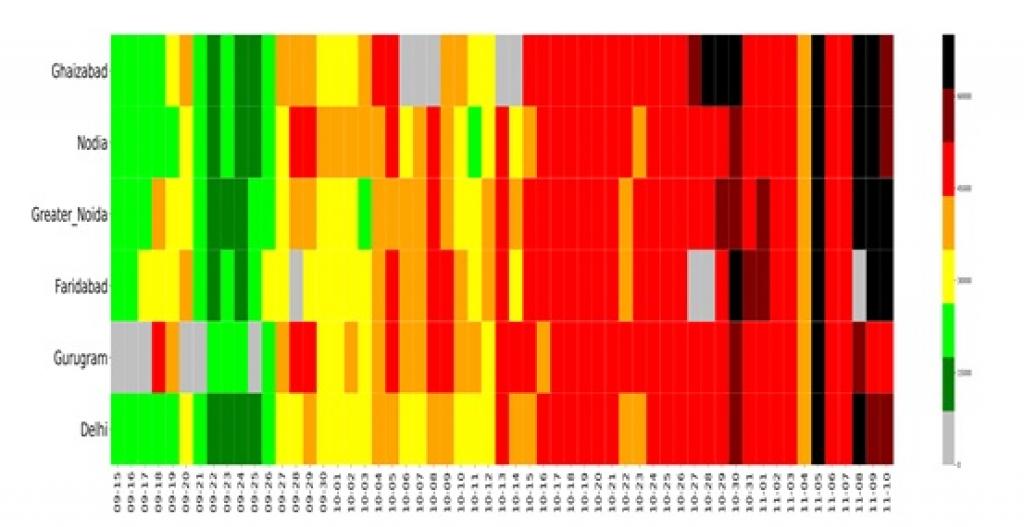 Air quality data indicates that the concentrated bursting of crackers after 10 pm at night had spiralled the pollution curve to nearly the same severe level that was observed during the previous Diwali. This happened despite the 2019 Diwali being warmer and windier than in 2018. This temporarily undid the comparatively better air quality gains of this season due to favourable weather, on-going pollution control action and preventive emergency measures.

As we go deeper into winter, occurance of episodic smogs can upset and skew the overall winter pollution trend. This demands stronger and continuous action in Delhi and across NCR to reduce the overall pollution.

It is absoluetly necessary that action is now stepped up to ensure that Delhi and NCR do not plunge into a prolonged smog episode this winter.