Why car-free days in Gurgaon must gather momentum

The vehicle ownership in the city is among the highest in the country, leading to air pollution 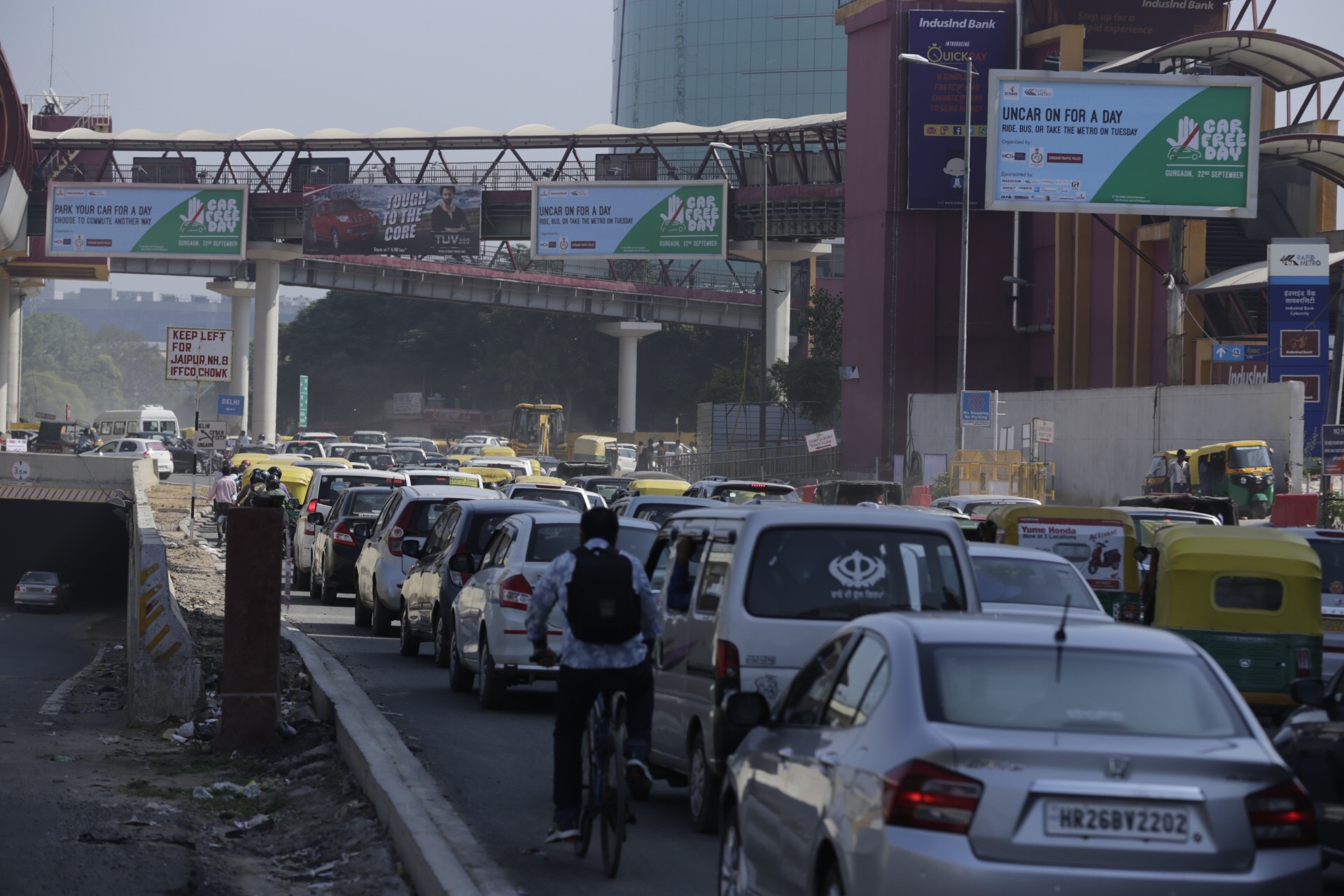 As the international car-free day catches public imagination in Gurgaon, a reality-check on pollution and congestion in the city can help to build a stronger public support for policy and community action.
Gurgaon cannot afford to slip now, but remain on track to reinvent mobility for the rich to prevent pollution, congestion and fuel wastage. The challenge is unique in this affluent city with one of the highest personal vehicle ownerships and public transport connectivity.

Time to take action to breathe easy
Gurgaon is already amongst the pollution hotspots. This is extremely dangerous for people suffering from asthma and other respiratory and cardiac problems as well as for children and the elderly.
The official air quality monitoring is very inadequate. But limited data last winter showed a large number of days with critical pollution levels.
When Delhi-based non-profit Centre for Science and Environment monitored how much pollution the people of Gurgaon breathe on a daily basis during winter, it found shocking results.
Daily personal exposure to toxic air was significantly higher than the background ambient air pollution monitored by the state Pollution Control Board. The 24-hour exposure in December 2014 hit as high as 777 microgramme per cubic metre — about 12 times higher than the normal standard of 60 microgramme per cubic metre.
IFFCO Chowk, Cyber Green Office area, Sohna Road, Artemis Hospital, Amity International School, Medanta, Rajiv Chowk, Civil Hospital, Sadar Bazaar and Udyog Vihar were among the most polluted hotspots in the city.
During early winter mornings when children go to school and people go out for their daily walk, the hourly average pollution rate in winter was unacceptably high. Gurgaon cannot afford to face another winter that bad.

CSE’s assessment shows that though the size of the city and the length of the road network of Gurgaon is much less than that of Delhi, the vehicle density is higher. This means road availability per 1,000 vehicles is much lower than that in Delhi.
Chandigarh has 441,284 vehicles per 1,000 km of road length whereas Delhi has 243,783 vehicles per 1,000 km of road length. This puts a limit to the growth of vehicle-based infrastructure. Chandigarh will use up its available space quickly. Not only the car numbers are increasing, the markets are also shifting steadily towards bigger cars and diesel cars and SUVs. Overall, diesel consumption has increased in the National Capital Region (NCR). Freight transport is also adding to the risk.

Mobility crisis in the city
Over the years, there has been a steep decline in public transport ridership and very high increase in personal vehicle usage in Gurgaon. In 2004, personal transport trips were 39 per cent that increased to as much as 60 per cent in 2010.
The share of public transport, walk and cycle has dropped from 58 per cent to 40 per cent. This is happening at a time when exposure to pollution has increased significantly and the city is fighting a serious battle with congestion. Bus numbers have not increased appreciably and the infrastructure has not expanded.

Gurgaon is blessed with metro line and rapid metro. It has also started to increase the number of its buses. But overall, the urban design of the city does not enable deeper penetration of public transport system into neighbourhoods. Poor first mile connectivity and lack of integrated design for public transport impedes easy access to public transport system. The gated urban design also does not allow deeper bus entry into neighbourhoods of various sectors. The city now needs scale-up and integration of buses and other public modes of transport while maintaining reliability and frequency of quality service to attract people. 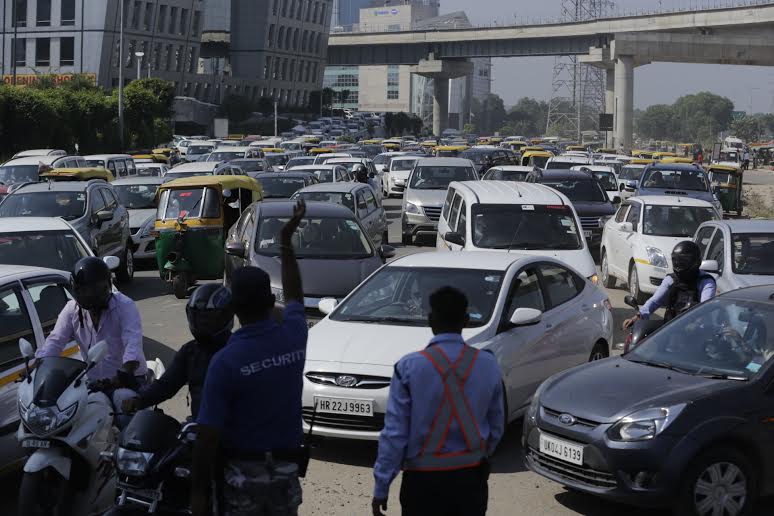 Gurgaon can become car-free for local travel
It is possible for Gurgaon to cut down on a significant number of motorised trips by making the city more walkable and cycle friendly. Short travel distances will make the city walkable and friendly for cyclists.
However, this is not being nurtured even though Gurgaon has huge advantage in the area of short-distance travel. More than 45 per cent of trips are between 0-2 km, 8 per cent of trips are between 2-6 km and 8 per cent between -10 kms?? Is it less than 10 km. The number of maximum daily trips are less than 5 km.
This is evident from the Integrated Mobility Plan for Gurgaon Manesar Urban Complex, 2010. The maximum trip length is covered by buses, but due to their less availability, people have to depend on personal modes of transport. Gurgaon should leverage this advantage to convert major parts of the short distance motorised trips into motorised ones.

Gurgaon must not repeat the mistakes of Delhi. More roads are not the answer. The Car-centric policy is steadily marginalising and edging out sustainable modes of transport such as bus.

Making travel safe
It is possible to leave cars behind only if it is safe to walk and take public transport. According to the data from the Gurgaon traffic police, the city reports more than one death per 1,000 people due to road accidents. More than 60 per cent of injuries are reported during the day. The major highways that cut across the city add to the accident risk. Sixty per cent of accidents occur on the National Highway-8.
When globally the trend is towards reducing vehicular speed inside cities, our cities are adopting road designs to increase the speed of vehicles.

Unlimited, free parking is triggering uncontrolled car use
The first step towards car-free travel begins with parking restraint. Gurgaon has taken that step forward by restricting on-street parking in targeted areas. Personal cars demand enormous land area for parking.
In Gurgaon, the current registration of cars creates demand for land for parking equal to 179 football fields. Limited urban space used for parking can have other and more important uses. Use of valuable urban space is either available free or for a pittance. This is a hidden subsidy to car owners as the cost of using up scarce and valuable space for parking is not recovered through proper pricing and taxes.
Supply of free parking space can further boost motorisation. The data available for key locations including Cyber Park, Huda Shopping Complex, Fountain Chowk, Sethi Chowk, Vishwakarma Road and MG Road show that 80 to 90 per cent of vehicles in the parking areas are cars and two-wheelers. Only in some areas, autos have substantial presence. Personal vehicles are, therefore, creating enormous pressure not only on road space but also on public spaces.
Yet most of the parkers are short-term parkers. More than 80 per cent of the vehicles are parked for less than an hour. Short-term parkers are more seen at commercial areas. With an effective parking pricing strategy, this pressure can be reduced.

Poor accessibility to metro
The CSE street audit carried out recently has assessed inter-connected street network that allows movement, engineering and design features for footpath and cycle tracks; crossing-intersection and mid-section protection for pedestrians and public transport users, modal interchange locations and parking for all mode users, location and quality of facilities outside station premises, way finding maps, universal accessibility; amenities and safety features (toilets, vendor spaces, trees, lighting, seating ), and building entry locations and public transport feeder services).
This was particularly done within the 500-metre radius from metro stations. All metro stations show very poor ranking on that basis. The access to metro stations is not designed, keeping pedestrians and cyclists in mind. There are no safe crossings around any metro stations for pedestrians and cyclists. Footpaths are available mainly all around the metro stations, but their height and quality does not allow people to use them. There are no cycle tracks, except some near Huda City Centre, which is not usable as it’s a one way road.
Autos and cycle rickshaws are the major feeder services along metro stations. There are hardly any bus stops outside metro stations. Parking is provided mainly for private vehicles. Autos and cycle rickshaws are parked along the road outside metro stations as no designated parking lots are provided for feeder services.

The city’s urban design is not compact enough to allow buses and para-transit to penetrate deeper into neighbourhoods. This makes use of public transport difficult.
The CSE audit also shows that all residential neighbourhoods along the metro line are poorly connected with transit lines. This is against the principle of transit-oriented development.

Time to make polluters pay
Though cars cause congestion and add on to pollution they are not made to pay for this damage. On the contrary, buses pay higher road tax. The Haryana transport department charges road tax (called token tax) for cars as per the value of the vehicle. The tax slab ranges from up to Rs 6 lakh to car of the value exceeding Rs 20 lakh and the tax rates range from 3 per cent of the value of the car to 9 per cent of the value of the car.
In this way, a car costing Rs 6 lakh needs to pay Rs 18,000 at the time of registration. A stage carriage bus needs to pay Rs 550 per seat per annum subject to a maximum of Rs 35,000. On the other hand a stage carriage city private bus plying in Faridabad and Gurgaon need to pay Rs 18,000 for half-body bus per annum and 30,000 for a full-body bus per annum.
The imposition of taxes on private vehicles is negligible vis-a-vis that of public transport buses. Moreover, the tax rates are per passenger seat basis. But cars need to be taxed higher than buses, something which many other countries are already doing.

People want change
CSE carried out a rapid survey to understand people’s perception of air pollution and mobility problems in Gurgaon. About 85 per cent say air pollution is worsening. About 40 per cent feel cases of respiratory diseases are rising.
More than 60 per cent have complained of increased delays during peak hours. About 40-50 per cent are in favour of cycles and cycle rickshaws.
The public transport got the worst rating, with people complaining about the city having no proper public transport connectivity. About 30 per cent rated the auto/tempo services as average but say they are important.
About two-thirds think parking is causing encroachment on footpaths and causing congestion on the roads. Nearly 70 per cent think that the government should make efforts to reduce dependence on personal vehicles. Around 90 per cent want more action to increase public transport and non-motorised infrastructure.

The community action on car-free day demonstrates the power of public opinion and support. Leverage this to make a difference.