Promoted by the government, short-duration varieties now dominate Punjab’s paddy landscape and allow farmers enough time to clear the field without setting them on fire. Why then are strawburning incidents still on the rise? 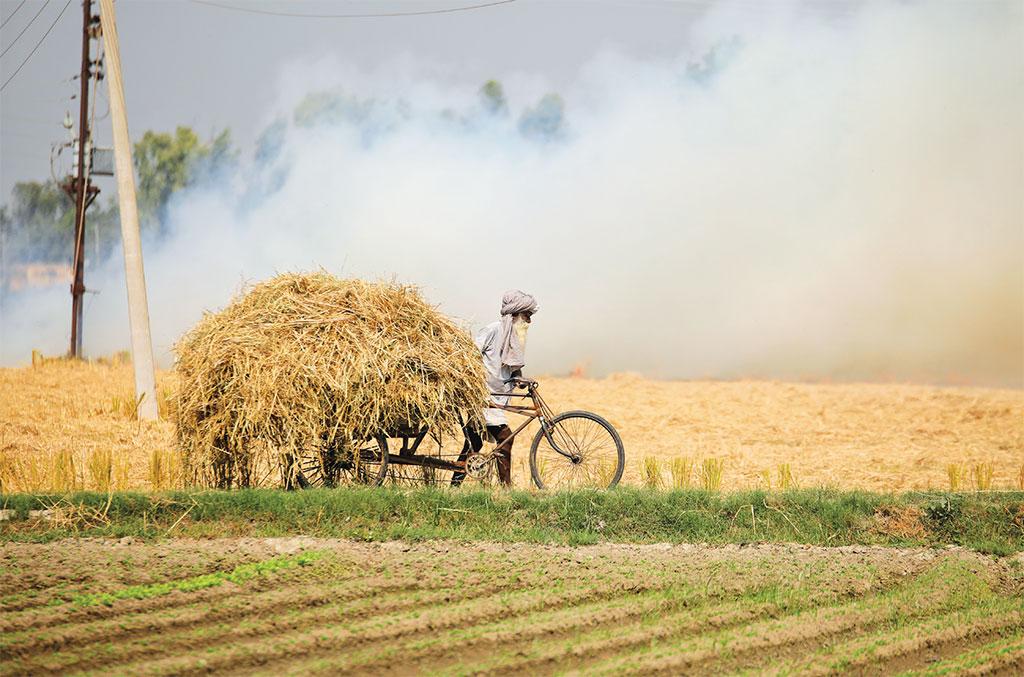 The government has launched and promoted short-duration paddy varieties over the past decade to curb straw burning (Photograph: Vikas Choudhary)

Gursimran is somewhat dejected as he oversees a combine harvesting machine work his paddy fields. “Though the yield is better than what it has been in the past two years, it is still not as much as I used to get earlier,” he said.

The 32-year-old farmer has been growing paddy in his over 10 hectare (ha) ancestral land in Mansa district’s Sadda Singhwala village since he completed a civil engineering degree in 2014.

Initially, Gursimran cultivated Pusa 44—the most widely sown long-duration paddy variety in Punjab—but decided to shift to the short-duration PR 126 variety in 2019 to increase his income. "The short-duration variety gives me time to grow intermediary crops after harvesting paddy in October," he says.

Ever since the National Green Tribunal asked the Union Ministry of Agriculture and Farmers Welfare to resolve the problem of straw burning in 2015 (the efforts were redoubled after the unprecedented week-long smog in Delhi in 2016), the government has promoted paddy varieties that can be harvested in a shorter duration (up to 140 days).

The idea is to give farmers 20-25 days to clear the field in October-November after the kharif season so that they do not resort to the quick-fix solution of straw burning for preparing the fields to sow rabi crops.

“The old long-term variety used to leave just 10 days for sowing between kharif paddy to rabi wheat. Short-duration varieties, especially PR 126 (the quickest to harvest variety), give a window of over 35 days to farmers, while PR 121 (the most widely cultivated short-duration variety) gives around 20 days. The window is now much bigger," GS Mangat, principal rice breeder at the department of plant breeding and genetics, Punjab Agricultural University (PAU), Ludhiana, said.

“The new varieties are dwarf, high yielding and have the ability to fight more diseases,” he added. PAU even distributed seeds of short-duration varieties free to farmers in six districts—Barnala, Ludhiana, Mansa, Moga, Muktsar and Sangrur—to promote their cultivation in 2018 and 2019. 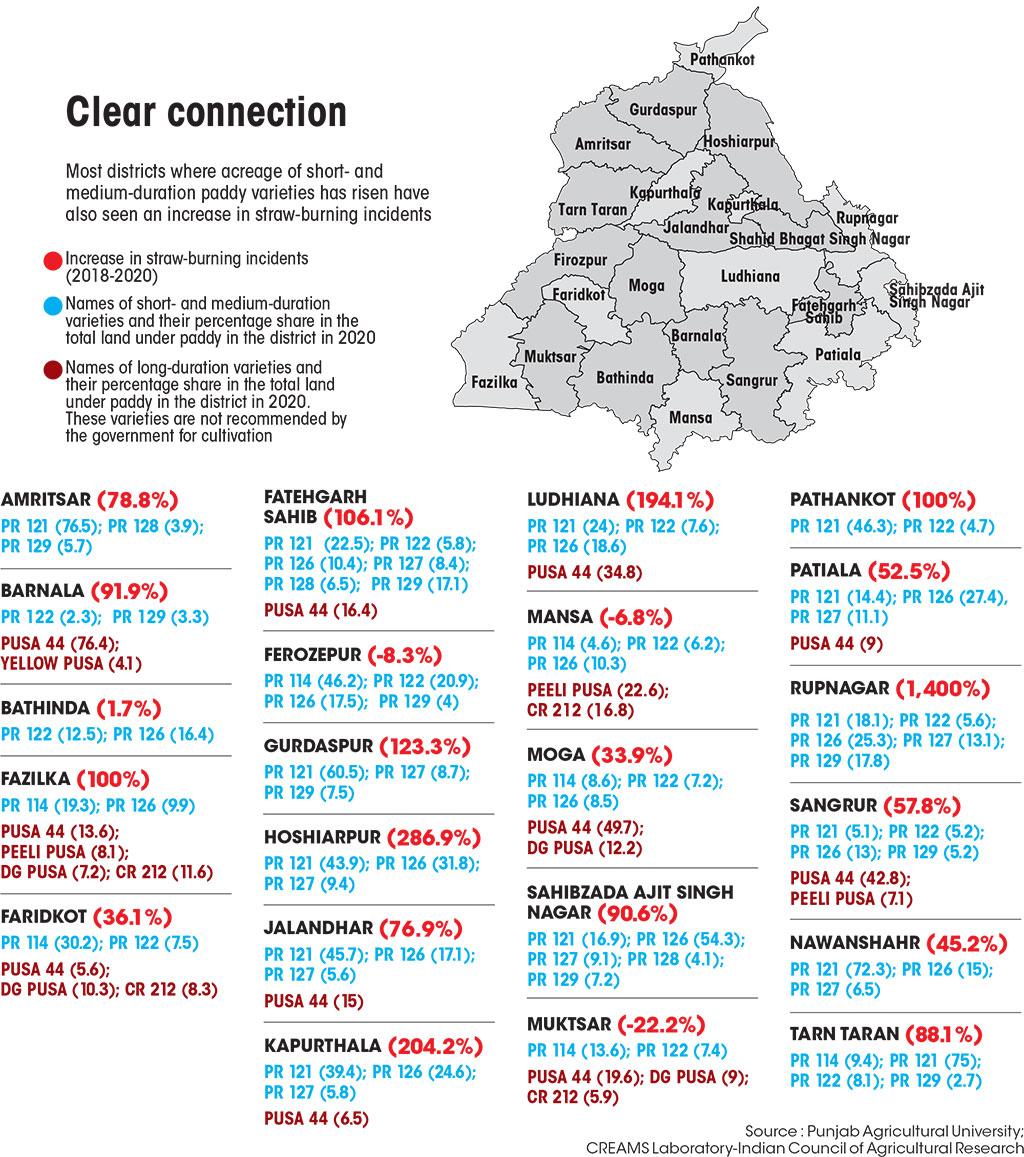 The government’s efforts in the past decade have borne results and the ratio of land under short-duration varieties to the total land under paddy has more than doubled—from 32.6 per cent in 2012 to 67.7 per cent in 2021.

The rise of short-duration varieties should have resulted in a reduction in stubble burning, but the districts where these varieties witnessed a boom have seen a rise in straw burning incidents, according to data collected by PAU on the 11 paddy varieties covered under the minimum support price (MSP) regime.

Rupnagar district, which almost had 80 per cent land under short-duration varieties in 2020 was the worst performer, with 1,400 per cent rise in straw burning incidents between 2018 and 2020.

Other districts on the list are Hoshiarpur (287 per cent), Kapurthala (204 cent) and Ludhiana (194 per cent). Only three districts have seen a reduction in straw burning incidents—Muktsar (22 per cent), Ferozepur (8 per cent) and Mansa (6.8 per cent).

The primary reason behind the rise of straw burning in districts that grow short-duration varieties is their low yield, due to which farmers are inclined to cultivate an additional set of crops, such as potato, peas, green lentil, between kharif and rabi.

Therefore, despite the big window to shift between kharif and rabi, they set the stubble on fire to maximise the available time. “I had a yield of 7 tonnes per hectare (ha) from PR 126, which is much less than the 8.8 tonnes per ha I used to get from Pusa 44. I want time to cultivate additional crops between the rice (khraif) and wheat (rabi) cycles. I immediately need to sow green lentil and will have to set the straw on fire,” Gursimran said. Balendra Singh of Parsaul village in Tarn Taran district offered the same reason. 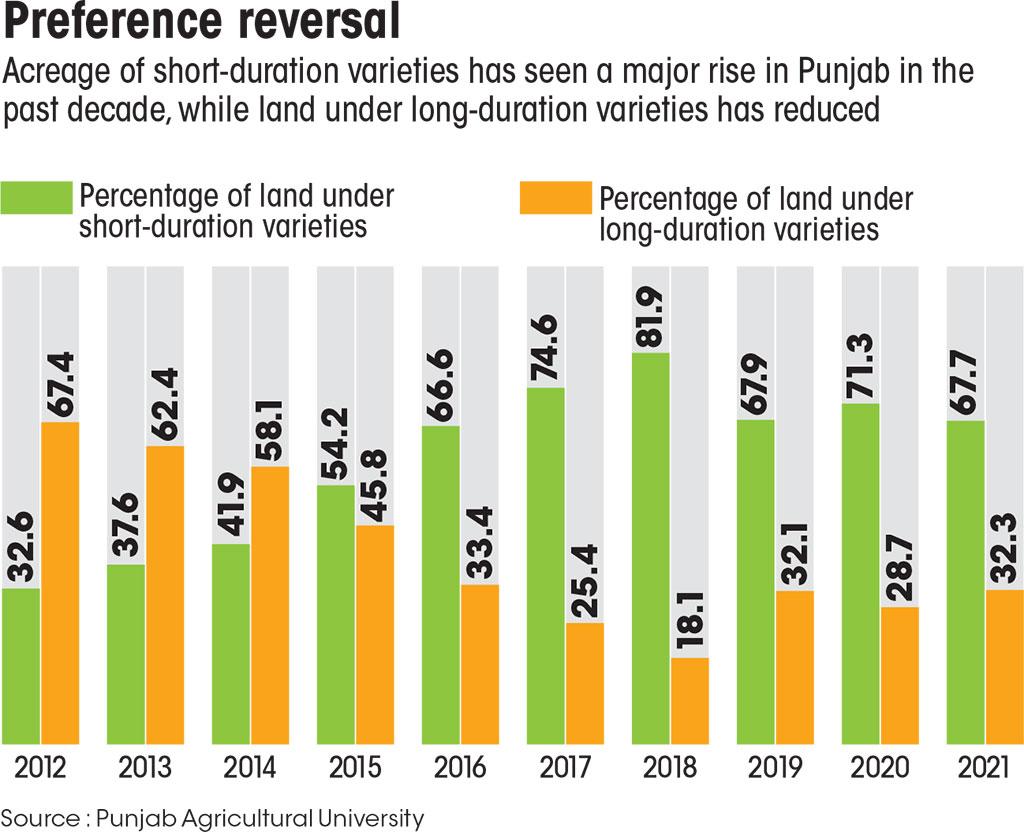 “The field had to be urgently cleared around October-end. The rates of mustard oil are high and the win-dow for sowing the crop was closing,” says the 64-year-old farmer. While some farmers resort to straw burning to make up for the losses incurred due to low yield, other do it just to maximise income. “Even those farmers who have grown short-duration varieties that fetched great prices have used the time between rabi and kharif to grow a third crop,” says Balendra. The MSP on PR 126 is R1,960 per quintal (1 quintal equals 0.1 tonne), while the MSP for PB 1121 (a short-duration variety released in 2013) is R4,000-5,000. “Even those farmers who grew PB 1121 have used the intermediary time to grow additional crops. I know farmers who set the field on fire just for quick disposal of straws,” says Balender. He, however, blames rice mills in the state for this, and says that farmers grow whatever rice mills wants to buy.

A Union agriculture ministry review of “Promotion of Agricultural Mechanisation for In-Situ Management of Crop Residue in the States of Punjab, Haryana, Uttar Pradesh and NCT of Delhi,” which is a Central scheme implemented in 2018-19, also blames rice mills.

Punjab has a network of 3,600 rice mills and in the initials years after the launch of PR 126, rice mills dissuaded farmers from growing the variety, says the report released on January 1, 2019. It also says that short-duration varieties can give farmers the opportunity to diversify into a third crop.

The government has taken strong steps to dissuade farmers from growing long-duration varieties. In 2017, PAU put Pusa44 and Peeli Pusa on the list of unrecommended varieties and even asked the Union government to denotify them.

“We have not de-notified the long-duration Pusa 44, although its seed is being completely discouraged,” DK Yadav, additional director-general (Seeds), Indian Council of Agricultural Research told Down To Earth.

Since farmers tend to save seeds for the next seasons, it will take some time for the variety to go out of circulation, Yadav added.

There are some 23 popular varieties of paddy in Punjab. These include six short-duration varieties that the government has launched and promoted since 2013 to fight the dual problems of water shortage and straw burning.

Since 2009, the state government, in consultation with the PAU, announces a date for allowing paddy sowing, which usually varies from June 10 to June 20.

This helps in combating the water crisis, since the monsoon season start towards the end of June and the farmers do not have to use groundwater.

But this has no bearing on the problem of straw burning. Buta Singh Dhillon, agricultural scientist at PAU, suggests that delaying the date of sowing could help.

“The trend in Punjab is to sow early to get time for intermediary crops. Delayed sowing would make farmers cultivate short-duration varieties. PR 121 and PR 124 can be transplanted around June 25, while PR 126 can be transplanted as late as July 5 without affecting their yield,” Dhillon said.

“My yield in the last two years was below average, but this year, I cultivated in mid-July, and the yield has improved at over 8 tonnes per ha,” Gursimran added.

“The changing climate conditions have troubled farmers. It takes them time to get used to new varieties, adjust to the sowing cycles and understand the condi-tions for optimum yield. Compared to Pusa 44, which was launched in 1994, these short-duration varieties are still nascent. Once farmers get used to them, the yield will improve and straw burning should go down,” Mangat, who calls PR 126 a wonder seed, said.