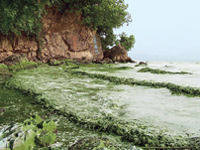 China has sacked five officials for "dereliction of supervision" and "inadequate work" after green algae covered the country's third largest lake, the Taihu, triggering a drinking water crisis for millions.

The foul-smelling blue-green algal bloom choked the lake in the eastern province of Jiangsu towards late May, and left tap water undrinkable for more than 2.3 million residents for weeks. The Taihu crisis is both natural and human-made, and is mostly blamed on the chronic pollution discharge by chemical plants near the lake, a local newspaper quotes officials from the State Administration of Environmental Protection saying. Algal blooms develop in water that is rich in nutrients, often because of runoff from heavy fertiliser use, industrial waste and untreated sewage. Following the incident, the government has ordered all towns around the lake to build sewage treatment plants and make sure chemicals factories meet water emission standards by next year.

In a separate incident, the marine algal bloom, known as red tide, has choked the Shenzhen bay of the South China Sea. The public has been issued warnings to stay away from the polluted sea or eat seafood products from the area. This is the third time this year that a red tide has appeared off Shenzhen: the first appeared near Shenzhen bay in January and another appeared near Dameisha in May. The red tide is said to be caused by a buildup of marine plankton that consume oxygen while releasing toxic substances into the water, killing off fish and plant life.