South African townships that were earlier helpless in the face of pollution caused by human wastes, are now bucking up to the problem. Spirulina, offering a cheap algae-based solution, has saved the day for them 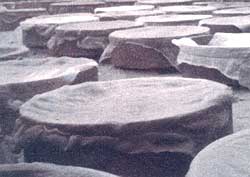 HOUSING lower- and middle-class blacks, certain South African townships are seriously threatened by contamination caused by human wastes. With no sewage disposal system, the residents of these poor localities use buckets to excrete and once these are full to the brim, the waste is either dumped into streams or on the outskirts of the townships (ScientificAmericah, Vol 273, No'5).

The dumping of these wastes is proving to be a major threat to the environment, as not only are the streams affected by it but even groundwater sources lying just four metres below the surface are.being polluted. But help is on the way. Peter D Rose of the Rhodes, University in SouthAfrica is using an algae-based system to solve the crisis. A pilot plant constructed nearby will receive the waste emitted by 500-1,000 people, through a 1,00,000 ha area of ponds and channels filled with spirulina. The single-celled plant thriving on salty, nutrient-rich sewage offers solace to millions of helpless South. Ilicans. When exposed to sunlight, these plants seek higher dissolved oxygen levels and ingest most of the waste, and the remaining heavy metals and inorganic detritus settle at the bottom of the waterbodies.

Sewage processing by algae, an age-old method, is now being made more effective by advanced technologies. In the past 10 years researchers have concentrated on cultivating algal species which can do even bitter than the activated-sludge process practised by industrialised nations. The algal ponds do not require the equipment and power needed to run the conventional activated-sludge ponds. This reduces the building and operation costs by about a half. These plants do not consume much water, which is an important innovation for and South Africa. The resultant sludge produced is also lesser in quantity, making it easier to truck it down to landfill sites. Not only that, but most of the sludge is usually tonnes of dead algae, which once dried, makes good fertiliser and,fish-food additive. Another *advantage of algal ponds is that they do not stink, as the algae only produce a lot of oxygen and not other rotten smelling gases.

For Rose, the technology serves a dual purpose. It holds the potential for improving community sanitation and at a low cost, making it attractive to the needs of developing countries., "One of the future benefits of the process is that once you have this algal biomass, you might be able to engineer it to produce by-products that are more valuable than animal feeds," he says. His team recently studied another algae, Dunaliella salina, which when exposed to excessive salt or heat, produces large amounts of beta-carotene (a nutrient used by the body to make vitamin A).

Rose has also demonstrated the usefulness of the system in treating industrial waste, from tanneries. Tannery waste includes effluents like sulphides, ammonia and heavy metals, which not only give off bad odour but are also among the most dangerous pollutants to be emitted by any industry. Rose tried out the spirulina treatment on this waste, when he noticed that the plant flourished in a tannery's evaporation pond. The treatment systems tried out in Transvaal, Namibia and Cape Town tanneries show promise, as they have been successful in squelching odour and reclaiming water lost through evaporation. With the expected expansion in the tanning industry in South Africa, the algal-pond system is expected to be a major boon to the country.

Says Rose, "Rapid industrialisation in the Third World often happens at the expense of the environment, because the costs of First World technologies to remedy the situation cannot be borne simultaneously. To come up with a low- cost solution that results in something not just safe but useful - well, that is the first prize in biotechnology."