Alitalia apologies to wastepicker but that is not enough 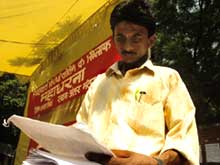 The airline company, Alitalia, was recently forced to issue an apology letter after its officials at New Delhi airport stopped a passenger from boarding a Belo Horizonte-bound flight. The company justified its action as "judicious discrimination". But to Santraj Maurya -- and all others who believe in civility -- the act smacked of racist arrogance. Maurya was on his way to attend a wastepickers' festival in the Brazilian city from August 23-24, but a business class ticket wasn't sufficient to provide him a "passenger profile" worthy of Alitalia. Angry reactions from Chintan, the ngo Maurya is affiliated with, did pressure the airline company into issuing an apology. But that's small consolation Maurya lost a chance of meeting fellow wastepickers from Latin America and Egypt and sharing experiences with them.

Alitalia has now given Maurya, a business class ticket -- valid for three years -- to fly anywhere where Alitalia operates.The option to swap the business class ticket for three economy class tickets is also there, but all these cannot undo the humiliation suffered by Maurya. "Alitalia's airport staff said I cannot travel business class and asked me to get my ticket money refunded. Repeated attempts to explain the purpose of my visit were of no avail. The officials told me that I would be refused entry, even if I came with a ticket a hundred times," says Maurya.

"The incident has reminded us, once again, that wastepickers lie at the bottom of the heap. Unless we can get a policy that acknowledges their work, wastepickers will be treated shabbily," says Bharti Chaturvedi, director of Chintan. In an earlier letter to the ngo, Alitalia had noted, "The passenger was denied boarding because of his inability to manage such a complicated trip, organised at the very last moment by a third party." The letter noted that he was grounded "in the best interest and safety of Mr Maurya and other passengers". Who decides what is a complicated trip and how does safety figure? The airlines obviously had no answer to these questions.

Meanwhile, Maurya has got back to scouring Delhi's streets with his army of 65 wastepickers. He is perhaps unmindful that the incident is likely to be added to Alitalia's hate-list website. Yes, go check www.alitaliasucks.com.