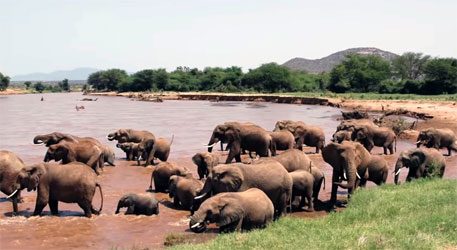 “Chinese traffickers are present in virtually every African range state, and operate at nearly every point along the ivory supply chain,” according to a new investigative report, “Out of Africa: Mapping the Global Trade in Illicit Elephant Ivory”, released on Wedneday

The  groundbreaking report, released by Born Free USA and C4ADS, brings to light the ivory supply chain and the trafficking of ivory from the bush in Africa to retail markets tens of thousands of miles away in Asia.

The report has been released just four months after their report, Ivory’s Curse: The Militarization and Professionalization of Poaching in Africa. “Out of Africa” builds on the facts provided in “Ivory’s curse”.  It is largely based on ivory seizure information available in the C4ADS’s ivory seizure database and data from the Elephant Trade Information System (ETIS).

'Out of Africa'
The detailed analysis of the ivory supply chain in “Out of Africa” confirms that much of the rest of profit appears to fund Asian transnational organized crime syndicates.

The report reveals that between 2009 and June 2014, there were more than 90 large-scale ivory seizures, collectively weighing almost 170 tonnes, which bear the hallmark of international organised crime. At a 10 per cent interception rate, this would amount to approximately 229,729 elephants killed and trafficked in fewer than six years.

Chinese drive the illegal modern ivory trade
"It is well known that East Asian nationals, and, in particular, the Chinese, drive the modern ivory trade. However, the scale we found in our investigation was shocking; Chinese traffickers are present in virtually every single African range state, and operate at nearly every point along the ivory supply chain," explained Adam M. Roberts, CEO of Born Free USA.

The report reveals that there may be about 100 large-scale ivory containers moving annually that drive the vast majority of the entire illegal trade. Focused efforts for intercepting these containers and tracing back their owners and facilitators can have a real impact on the trade according to Varun Vira, Chief of Analysis at C4ADS and co-author of the report.

Highlights: Ivory trends and the flows

Lack of knowledge about the illegal elephant trade
This report is an attempt to explain elephant trafficking by providing detailed information on how this illegal trade actually functions. It seeks to fill the knowledge gap on how the trade functions by providing actionable insights, and replicable and scalable processes, to help mobilize tangible action for the policy, intelligence, and law enforcement communities.

Investments and collaborative monitoring
Southern Africa is the home to majority of the continent's remaining elephants. It also houses highly professionalized wildlife trafficking syndicates, which are only now beginning to enter the trade in earnest. If ivory markets are not eliminated, demand will lead poaching operations further south, attacking the southern African elephant populations. This threat underscores the timeliness and urgency of this report.

Putting an end to elephant poaching and controlling the organised crime of ivory trade demands investment, says the report and provides valuable inputs “by identifying and targeting the key export points” for illicit African ivory.  It says that the organised international transit routes and the criminal networks must be monitored and tackled with support of the intelligence authorities. This global ivory supply chain can be broken only by closing the transit routes used to reach the final destination – the East Asian markets, especially China. And this requires collaboration and cooperation amongst the government policymakers, NGOs and conservationists, law enforcement agencies around the world, and the private sector too.

Another study, “Illegal killing for ivory drives global decline in African elephants”, published in August 19 issue of Proceedings of the National Academy of Sciences (PNAS) also showed that the ivory consumption is unsustainable and is causing a dramatic decline in the number of African elephants. According to this study, 100,000 African elephants have been killed from 2010 to 2012 to meet the increased demand for ivory, especially from China and other Asian nations.

To highliight the elephant killings, a Global March for Elephants and Rhinos is being organised on October 4 On this day, cities all over the world are marching for rhinos and elephant. Please find your city and join the march

Four Indian cities too are organising the march--Bengaluru, Chennai, Hyderabad and Mumbai.

Research: Global trends and factors associated with the illegal killing of elephants: A hierarchical bayesian analysis of carcass encounter data