Almost half of world’s population exposed to indoor air pollution 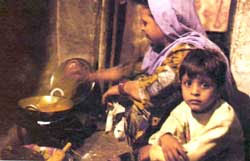 Household air pollutants are responsible for the death of more than 4.3 million people in 2012; more than 50 per cent of them were women and children. These were few of the factors highlighted at the ongoing Anil Agarwal Dialogue where experts discussed health challenges posed by indoor pollution. The two-day Dialogue is being organised by Delhi-based Centre for Science and Environment (CSE).

Disease risk from hazardous air pollutants is higher in women than in men, said Carlos Dora, health policy expert with WHO. Dora manages the WHO unit that provides guidance to mitigate health risks from air pollution, radiation and occupation, and to monitor, evaluate and track related policies. He said more than 2.9 billion people, or 42 per cent of the global population, were exposed to household air pollutants in 2012 alone.

Most of these pollutants are released by traditional Indian chulhas (cook stoves) that use firewood and dungcake as cooking fuel and kerosene-lit lamps, Dora said. Chulhas using solid cooking fuel release smoke equivalent to 400 cigarettes every hour.

Household air pollutants can cause diseases ranging from chronic obstructive lung disease and lung cancer to cataract, strokes and ischemic heart disease. They are responsible for almost 1.15 million premature deaths in the country every year, said Kirk R Smith, founder and director of Global Health and Environment Program at University of California, Berkeley. 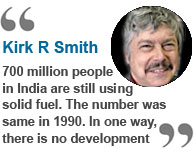 Smith further added that almost 700 million Indians are in chulha trap. In 1990, around 700 million people or 85 per cent of the country’s population were using solid fuel. Two decades later, the same number of people, now accounting for 60 per cent of the country’s population, was still using solid fuel. In one way, there is no development, Smith said.

Michael Brauer, director of Bridge Program, a strategic training fellowship programme of the University of British Columbia, Canada, that links public health, engineering and policy, said that the risks posed by ambient air pollution to individuals is very small. But it poses a larger risk when a large population is exposed to it. Their impact increases with the progression of the chronic diseases.

The experts emphasised on an urgent need for India to shift to clean cook stoves and cooking fuel. Brauer mentioned a research in rural China that shows that people living near the highway and depending on traditional cook stoves are the most vulnerable and face a risk of high blood pressure.

Damodar Bachani, in-charge of the national monitoring framework and action plan for non-communicable diseases with the Union Ministry of Health and Family Welfare, said India faces huge health challenges and is determined to control the situation by monitoring it.