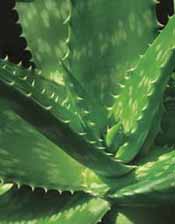 known for its cosmetic applications, aloe vera, the wonder plant, has now been found to possess ingredients that can cure kala-azar and some other forms of leishmaniasis. Ghrita Kumari, as the plant is locally known, can kill two forms of leishmania parasites, researchers from Kolkata's Institute of Post Graduate Medical Education and Research and Indian Institute of Chemical Biology have found. Leishmaniasis is a disease caused by protozoan parasites that belong to the genus Leishmania and is transmitted by certain species of sand fly.

In laboratory experiments, the team found that leaf extracts of the aloe vera plant directly killed two kinds of parasites, promastigotes and amastigotes. The promastigote form enters the human body through sand-fly bites and morphs into amastigote inside the macrophage cells, a type of immune cells derived from while blood cells. This causes kala-azar or leishmaniasis with symptoms like fever, loss of appetite and enlarged spleen and liver.

"Aloe vera extracts activated cultured mice macrophages increasing the production of toxic metabolites of oxygen like superoxide anions, hydrogen peroxide and nitric oxide," says Mitali Chatterjee, lead co-author of the study. "I feel that these toxic metabolites help generate oxidative stress-destroying leishmania parasites inside the macrophages," she says. According to her, the study has immense potential as aloe vera is easily available and its toxicity is low. Aloe vera, she says, could be a potential herbal remedy for kala-azar and other types of leishmaniasis.

After culling promastigotes from patients, the team converted them into amastigotes in culture media outside macrophage cells. Then promastigotes and amastigotes were exposed to various concentrations of the plant leaf extract. "The extract possesses a direct parasiticidal effect on leishmania promastigotes, irrespective of the species, suggesting its efficacy in all forms of leishmaniasis," comments Chitra Mandal, one of the authors.

The potency of the extract to kill leishmania amastigotes was over 25-fold higher than in promastigotes, write the researchers in Glycoconjugate Journal (Vol 24, No 1). This was significant, considering amastigotes are responsible for the disease.

According to the researchers, the study is significant as available anti-lesihmanial therapy has drawbacks like toxic side-effects, high cost and drug-resistance.

Aloe vera could be an effective antidote to kala-azar, which according to the National Vector Borne Disease Control Programme, puts 165.4 million people at risk in Bihar, Jharkhand, Uttar Pradesh and West Bengal.