Scientists are trying to enhance the quality of fish by using a controversial technique and are confident the process will be perfected soon. 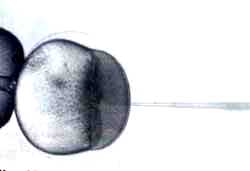 TRANSGENIC fish may soon be served at your favourite restaurant. Indian scientists are trying to genetically engineer certain fish species to make them grow larger faster. In this controversial technique, an organism is injected with genes from a foreign organism and once the transfer is accepted, a transgenic organism is formed. A transgenic rat was first produced in the 1980s.

The Chinese were the first to try to produce transgenic fish. This is a delicate and tricky process requiring gene sequences to be microinjected into the fish eggs. The process is relatively easier in mammalian eggs, where the egg is transparent and the nucleus is visible. Fish eggs are often opaque, making it difficult to inject foreign DNA into fish DNA.

Two teams -- one at the Madurai Kamaraj University lead by T J Pandian and the other at the Centre for Cellular and Molecular Biology (CCMB) in Hyderabad lead by K Majumdar -- are trying to introduce rat and human growth hormone genes into fish DNA. The Madurai Kamaraj University scientists are working on the fast-breeding zebra fish (Brachydanio rerio). Zebra fish females lay over 400 eggs almost every week. The eggs hatch in about 3 days and a new generation is ready within 3 or 4 months. The zebra fish egg is transparent and its outermost covering can be easily removed, making it easier to genetically engineer them.

Pieces of DNA containing rat growth hormone genes were microinjected into the artificially fertilised zebra fish eggs before the first cell division took place. The scientists found that half the embryos survivied for a day after the injection. The injected gene sequences persisted for three generations of fish but by the fourth generation, the gene sequences were lost.

During this time, the fish showed 22 per cent faster growth. This faster growth, however, was at the cost of reproduction. The scientists are now working on the problem of lowered reproduction rates. Says Pandian, "It will take at least another two or three years to produce a transgenic fish in which foreign gene sequences will persist after the third generation. Right now, it is too early to talk of commercialising the production of transgenic fish."

The Hyderabad team has been trying to alter fish of the Tilapia species. Attempts have made to inject human growth hormone genes into fertilised fish eggs, but work is still at a preliminary stage. The CCMB scientists are still not sure whether the microinjection will translate into expanded growth.