Hundreds of ridges that crisscross the rainforests of South America have helped flora and fauna proliferate, says a latest study 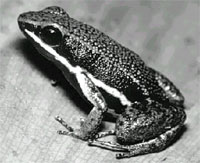 the lush green Amazonian forests have always left scientists wondering how such a variety was possible. This ecological booty is almost three times more than the flora and fauna found in other parts of the world.

Now, a new study, conducted by two American scientists, suggests that this diversity has resulted from buried ridges that crisscross the Amazonian region. This debunks a long-held theory that rivers in this region isolated Amazonian animals and halted their natural evolution ( New Scientist , Vol 164 No 2206). The scientists, Claude Gascon of Conservation International's Center for Applied Biodiversity Science in Washington and Stephen Lougheed of Canada's Queen's University, have challenged this theory. They say that if the existing theory is true, then animals on opposite banks of the river should be genetically distinct and the differences should increase as the river mouth widens. However, they added, that evidence to support this idea is sketchy and no such patterns were seen in rodents or amphibians.

Gascon and his colleague say that barriers like geological ridges are possibly at work. These ridges, they say, are hundreds of kilometres long, and dominated the western Amazonian landscape five to 10 million years ago. Now, several of these ridges, crisscrossing the region, are buried under sediment. Once they got a hint of this possibility, they "decided to rigorously test the idea".

To check whether this was a feasible explanation, their team looked at the diversity of poison-dart frogs ( Epipedobates femoralis ) in the region. These frogs live on trees and avoid rivers. The researchers collected dna from frogs along both sides of river Rio Jurua, which runs west to east. In addition to this, they also collected the same samples from both sides of the ridge, 200-km wide that bisects the river from north to south. Tests on the dna of frogs showed that groups on opposite banks of the river were genetically similar than those from different sites on the same bank. They also found that widening rivers had no effect on the diversity. But, two genetically different groups were present on either side of the ridge. "The patterns of variation do not match the presence of the river," says Gascon. "But they match very nicely with these ridges," he added.

The results conclusively suggest that these Amazonian ridges have been a major evolutionary force over the past few million years. Gascon feels that patterns of bird and primate diversity that seem to correspond to rivers are simply an artefact. "Taxonomists that work with these groups tend to be fine splitters," he says suggesting that they may record different species on opposite banks based on minute details.